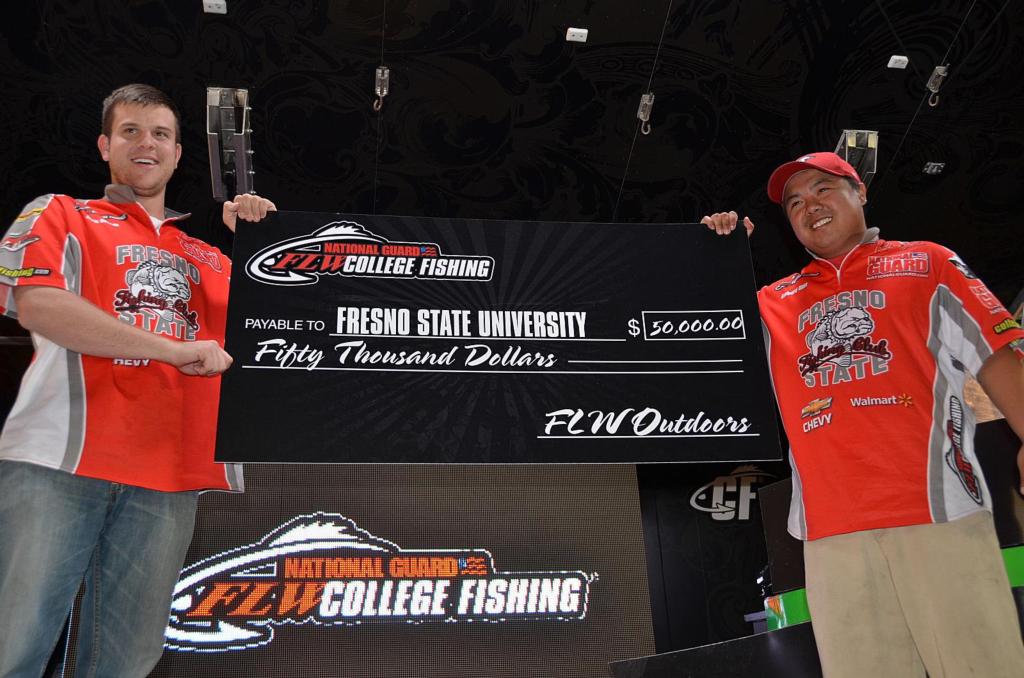 And they did so in style. Heading into today’s events, Moua and Delgado had a 9-pound lead. By the end of final weigh-in, they had a well-earned, 8-pound margin of victory. For their efforts, Kong and Delgado netted the tournament title, a berth in the 2012 FLW College Fishing National Championship as well as $50,000 in winnings.

Not surprisingly, they couldn’t have been happier about the way things turned out in Tempe.

“These are the moments dreams are made of,” said Delgado, whose team landed a total of 23 pounds, 11 ounces over the three-day tournament. “And we even get to keep the big check! I can’t believe it. It’s pretty surreal. Now we have two wins in back-to-back tournaments. It’s just amazing. I really can’t emphasize how great this (FLW college fishing) program is. It’s just awesome.”

Fresno State qualified for the western regional by winning the western division qualifier on the Cal Delta. Now, they get to add an even more prestigious title to their collection.

“I’ve been to the regionals before and wasn’t able to win the title,” said Moua. “So this has been a long time coming for me. It’s actually kind of blowing my mind right now.”

Like most of the team finalists, the Fresno State team employed a drop-shot rig equipped with two different types of 6 1/2-inch Robo worms – one in an oxblood color with red flake and another in a Morning Dawn pattern.

“We basically found a spot and stayed on it all three days,” said Delgado. “We called it the `dog pound.” We’re fishing anywhere from 35 to 65 feet and we’d stay there for eight hours each day. It took a lot of patience. Some of the teams would come into our area, fish a little bit, get discouraged and leave. But you really had to grind it out and put that bait on the bottom. If it wasn’t right in the fish’s face, they wouldn’t bite.” 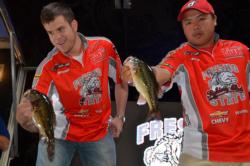 With a 9-pound lead coming into the finals, the team was well aware it was its tournament to lose. But with the weather change, their task got a little easier as everyone struggled on the final day of competition. In fact, none of the finalists even managed to beat Fresno State’s day-two totals after three days of fishing.

“We knew that the weather was changing and that the fishing was going to get tougher. So when we got to our spot, we guarded it all day,” said Delgado. “We knew that the only way a team could beat us was if they pulled out some monster fish. And we weren’t going to let that happen on our spot.”

Now that Fresno State has the western regional title under its belt, Moua and Delgado said they can shift their attention to the 2012 national championship.

“The western guys really haven’t done well at nationals over the past couple of years and we want to change that,” said Moua. “I can’t wait.” 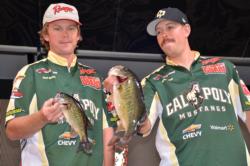 Bolstered by the best stringer of the day, the Cal Poly team of Damian Bean and Scott Hellesen vaulted from fourth place to second overall with a total, three-day weight of 15 pounds, 11 ounces.

“It kind of feels like a miracle,” said Bean. “We only had 15 ounces on the first day and I said to my partner that night that we couldn’t give up. I knew we’re capable of catching a big stringer. So we scrapped what we’re doing and really changed things up.”

“We started fishing in 30 feet of water near a vertical wall,” said Bean. “We’re targeting boulders and some other structure with a combination of Robo worms and Jackal cross tail shad. We really got on a good cross-tail pattern today but we kind of ran out of time.”

However, after heading into day two in 14th place with a paltry 15-ounce catch, the Cal Poly team said they were more than happy with their finish.

“We qualified for the national championship as well and that’s pretty awesome,” said Bean, who will be making his second straight trip with Hellesen to college fishing’s biggest stage. “We want some redemption for the western guys. This year we’re going to give it 110 percent and bring something back for the west.”

For their efforts, Cal Poly also walked away with $10,000 in winnings.

Using a total catch of 14 pounds, 3 ounces, the Sacramento State team of Thomas Kanemoto and Robert Matsuura finished the western regional in third place overall – earning a nice $5,000 payday as well as a trip to the national championship.

“We approached this lake the same way all three days,” said Matsuura. “We used a drop-shot with a Robo worm and we fished in anywhere from 10 to 20 feet of water, targeting weeds on a few humps. The weeds were key for us. But it was tough fishing. The lake is so small that everyone wound up basically fishing the same stuff.”

Although Matsuura would have liked to have won the event, duplicating his team’s first-place effort in 2010, he said he was happy to at least be returning to the national championship.

“I can’t wait to go back,” said Matsuura. “I didn’t fish very well there last year so I’m looking for some redemption.” 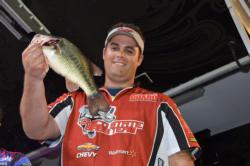 Although the Chico State bass club had hoped for a first-place victory from one of their two teams, in the end, the club had to settle for very respectable fourth- and fifth-place finishes. The Chico State team of Thomas White and Frank Vogt, who led all teams after the opening round of competition, unfortunately struggled to put bass in the boat on days two and three. As such, the team settled for fourth place overall.

“We only caught one fish today at 8:30 so it was pretty tough out there for us for the second day in a row,” said White, whose team ultimately finished with a three-day total of 13 pounds, 15 ounces after landing a 10-pound, 5-ounce stringer on day one. “It was kind of humbling to be leading after the first day and not be able to pull out a victory. But that’s just fishing. Hopefully that will make us tougher.”

White said the team employed a drop-shot with a 4 1/2-inch Power worm, targeting a rock saddle in front of a bank.

“We fished so hard today and we did everything we could,” said White. “It really seemed that by the end of the tournament, the boats were just rotating spots. It was a small lake to begin with and it got smaller as the tournament went on.”

“When the current shut off, that was it for us,” said Vogt. “It was all about timing.”

However, although they were disappointed with the final outcome, the team’s automatic berth in the 2012 national championship took some of the string out of their finish.

“I’ve never been to the national championship,” said Vogt. “I’ve heard a lot about it and I’m really stoked I’m going to finally get to go.”

For their efforts, the team took home $5,000 in winnings. 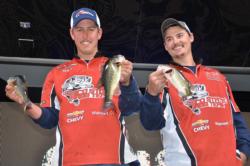 The second Chico State club, manned by Bo Harkins and Anthony Dayton, finished the event in fifth place with a total catch of 13 pounds, 4 ounces.

“We attacked the lake the same way we’ve been attacking it all week,” said Harkins. “But that cold front really moved our fish around so we kind of had to freelance a bit today. We wound up catching a couple of fish but nothing special.”

The duo employed a drop-shot technique with a 4 1/2-inch curly-tail Robo worm to land the majority of their catch.

“We basically fished in 10 to 25 feet of water, targeting pockets and humps off a sheer wall,” said Harkins.

While the team didn’t get the title they were hoping for, the Chico State squad said that they had very few regrets.

“We had a really good time out there all week,” said Harkins. “We came here to get into the top five and we did that. And I’m just ecstatic that we’re going to the national championship.”

The exact dates and location of the 2012 FLW College Fishing National Championship will be posted within the coming weeks on FLWOutdoors.com. So stay tuned.