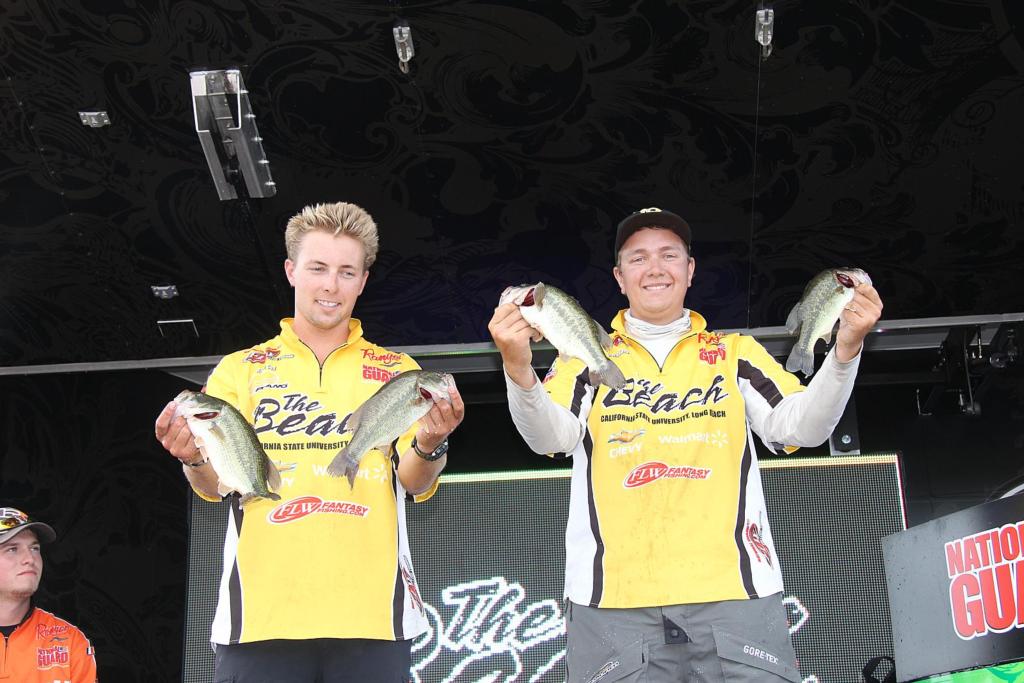 OREM, Utah – And then there was one. That’s usually a declaration of finality; stoically stated for dramatic effect. In the case of CSU-Long Beach anglers Justin Gangel and Alex Cox, winning the FLW National Guard College Fishing Series Western Conference Championship on Utah Lake was a matter of dialing in one bait before the show even started.

Bagging daily weights of 8-5, 5-14 and 7-5 the champs ended with a total weight of 21-8 and a winning margin of 5-2. The only team with a day-three limit, Cox and Gangel caught their fish on the 4-inch Gary Yamamoto Fat Ika. Kind of a grub/tube hybrid, the bait has a plump, solid body with a fringe skirt that wiggles enticingly. 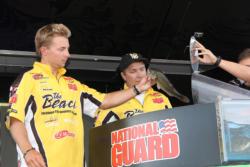 Beach, Cox had a light bulb moment during practice when he determined that this bait seemed like a good option for the vast stands of reeds throughout Utah Lake.

“Back home, the fishing is really tough in the city park so you have to flip your bait way back in the vegetation,” Cox said. “The Ika has a fat, round body that you don’t have to add weight to. The body has (enough) weight so you can flip it and when it hits the water it sinks at the perfect rate, which is ideal in the murky water. It has a nice slow presentation so they have time to eat it. Also, the tentacles move on their own so you don’t have to twitch (the bait).”

Adding glass rattles and spraying the Ikas with Bang craw/shad scent increased the bait’s attraction. As Gangel noted, the deal worked so well they had to restock their tackle bags.

“We came off the water early on Thursday just to order six more packs of these because we were going through them like hotcakes,” he said. 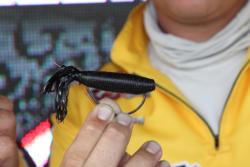 Rigging was essential for the proper presentation. Basically, Cox and Gangel rigged their Ika’s backward from the standard Texas style arrangement. Rather than inserting their 5/0 Owner wide gap hooks through the rounded head end, they started at the fringed end and anchored their hooks in the head. This created an aerodynamic package the enabled them to flip into the deep reaches where the fish were hiding.

“When you rig it Texas style, you can flip it into pretty much anything,” Cox said. “I was flipping it into and over sections of reeds that you couldn’t get any other bait into. We caught one fish that was (briefly) hanging up in the air because it was in (such thick vegetation when we hooked it). We pulled the boat over and netted it.

“You can get this bait into a lot of places where you don’t think the fish are going to be, and that’s key. As the weights showed, there weren’t many fish to be caught so it was important to find every one of them.”

The winners flipped with extra-heavy Dobyns rods and Shimano Core (flipping version) reels spooled with 50 and 60-pound braid. The reels, Cox said, were an important piece of the picture, as the flipping-specific tuning facilitated the pace of 10-12 flips per minute that the anglers maintained all 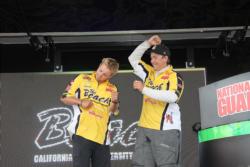 “All that was key because as soon as there was a bite, you just had to rip him out of the reeds,” Gangel said. “You couldn’t give him anything; you just had to get him into the boat.”

The winning anglers did all of their damage in Provo Bay – a shallow area known also known as “Mud Lake” on Utah Lake’s southeast corner. The area’s dense reeds reminded Cox of El Dorado’s thick tules so he knew just how to fish it.

“The depth was about a foot and a half for three miles,” Gangel said. “Once we got in, it was between a foot and two feet deep the entire time we were in there. We found a spot away from everyone else and we were fishing as deep in that vegetation as we could get.”

Cox summarized: “We put it all together, stuck to our plan three days in a row and just got it done.” 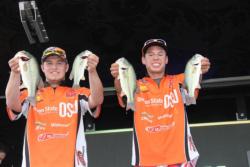 For Oregon State’s Zach MacDonald and Ryan Sparks, days one and two were all about brief spurts of quality. Both days saw them weigh in two fish for weights of 5-6 and 5-4. Day three yielded four fish, but the size was much smaller and their final-round weight of 5-12 gave them a tournament total of 16-6, which moved them up from fourth place to second.

“Actually, the whole week, we only broke off one fish, which I don’t think would have made a difference,” MacDonald said. “Overall, we stuck all our fish. Today they were just small.”

MacDonald said he and his teammate realized that the spots they had depended on for days one and two were becoming exhausted so they ran around the lake and tried several new areas. One of their keepers came from new water.

Sparks caught three of their fish on a 3 1/2-inch Zoom tube (black/red) Texas-rigged on a 3/0 Owner hook. MacDonald added the other keeper on a Reaction Innovations Smallie Beaver (green gobi).

“From all the pressure, the fish were definitely were eating the smaller stuff,” MacDonald said. “We caught all our fish on that little tube and the little Beaver.” 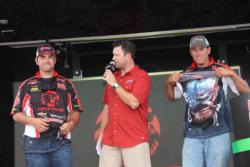 with 10-5 – the largest bag of the tournament. They stumbled on day two and slipped to second after catching just one fish that went 2-1. A day-three goose egg dropped them to third with 12-6.

“Today we were kind of out of our element and we were running around,” Carrico said. “We said to ourselves: ‘It’s the final day and we need to try to make something happen. Unfortunately, it didn’t happen. I think we just fished too fast and we were just jumping around a little too much.”

The Chico State anglers threw a mix of chatterbaits, crankbaits, shaky head with a Berkley Pit Boss and Senkos. 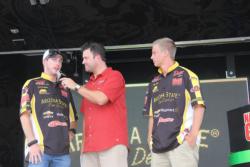 Arizona State’s Jason Karseboom and Bobby Fletcher also came up empty on day three. After posting weights of 2-4 and 8-15, they dropped a notch to fourth place with 11-3. This team made a dramatic improvement on day two by advancing from 11th place to third. Flipping small beaver style baits was their most productive tactic.

“I think dedication is what got us (to the top-5),” Fletcher said. “We didn’t change baits and we stuck to what we were doing because we knew they were there. We just knew we had to hit them right on the head.”

Sam Sayad and Chris Rhoden, of UC Santa Cruz entered day three in fifth place and after a fishless 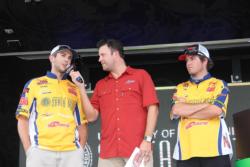 day on Utah Lake, they finished in the same position with a total weight of 9-1. Fate dealt a crushing blow early in their day, as a game-changing opportunity came and went.

“We were getting about 15 bites a day up there so we thought it was good for another day,” Sayad said. “The first hour I broke off about a 4-pounder. For this lake, it was just a heart-breaker. From there, it just kind of spiraled downhill. We fished hard and gave it our all.”