Purdue pulls it off 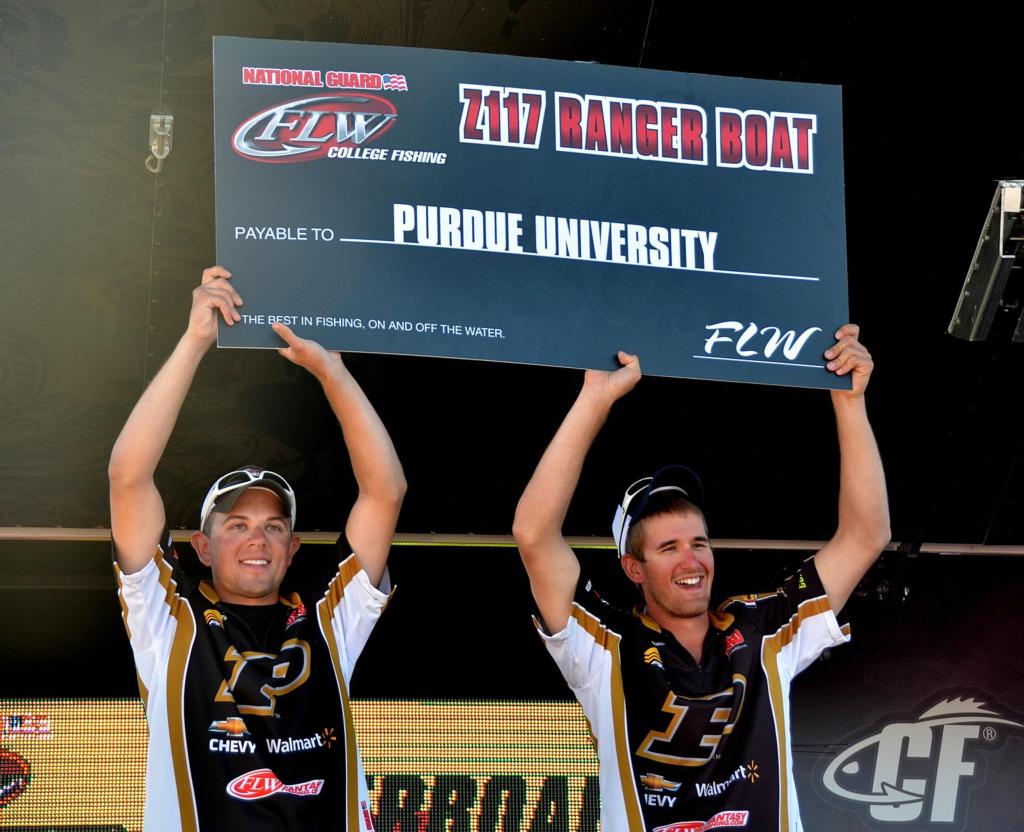 CARLYLE, Ill. – Coming into the final day, the competitive nature between the two rival schools of Purdue and Indiana was to see who could place higher. Purdue started the day just 15 ounces out of the lead, and almost 4 pounds ahead of Indiana. As Purdue took the stage they had only one team left to weigh in – the team that lead coming into the final day.

When Winona State only brought three fish to the scales, it sealed the victory for Nicholas Schuetz and Elliott Myers of Purdue and sat Indiana behind them to only sweeten the deal. Schuetz and Myers weighed in 11 pounds, 11 ounces on day one, backed that up with 14-14 on day two and replicated their day on total of 11-11 today to give them 37-15 for a three-day total and the Central Conference Championship. 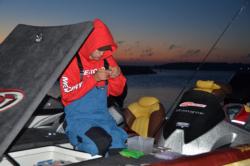 As storms rolled through Carlyle during the evening hours, the teams awoke to temperatures nearly 20 degrees cooler than what they have been on the previous days. With the water rising slightly and temps dropping, Purdue expected it could have been a tough day.

“We knew that because of that cold front the fish would hold on wood cover really good today,” said Schuetz. “Our area we fished had lots of wood in it so we knew we would be around fish. Winona was in the same spot, we just stayed patient and knew eventually the fish would bite.”

Purdue fished in the back of the Peppenhorst Branch all week long. Most of their attention was spent on shallow flooded cover in 3 feet or less. To entice bites everyday they relied on multiple different baits. On the first day a bluegill with chartreuse tail Secret Lures Stupid Tube was the hot ticket. On the second day the Terminator spinnerbait and a Secret Lures swim jig did the job. For the final day when they slowed down, a Big Bite Baits YoMama helped put fish in the boat. Though, a Terminator spinnerbait did provide their biggest fish of the day.

“One of the best things about our spot was that we had fish coming to us,” continued Schuetz. “Anytime you find fish that are coming to you, it’s really your tournament to lose.” 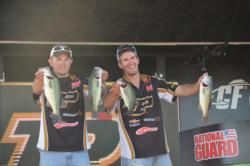 Myers is a quiet guy who was all smiles the entire week. He never had much to say, but that must be because he did all of his talking in the boat. Myers carried the team today as he caught a majority of the fish.

“I’m a pretty quiet guy, I just try to keep Nick calm when he gets worked up on the water,” said Myers. “I have to hand it to Nick; he did a great job with the net today.” 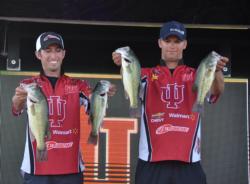 If there was an award for consistency this week, Dustin Vaal and Steven Bressler would win it hands down. They sat in fourth place after a day-one weight of 11 pounds, 1 ounce. They dropped to fifth on day two with 11-11, and made the cut to fish the final day. Once again, they brought 11-11 to the stage today and climbed the ranks to take home second place for Indiana with a three-day total of 34-7.

“Today we just fished our instincts, if we saw something that looked good we fished it,” said Bressler.

“We ran all over the lake again today,” said Vaal. “We had the chances today but lost two good ones.”

Indiana focused on one pattern all week that they were able to replicate across the lake. It focused on fishing the first two pockets on the outer edge of the bays, but they had to have flooded grass and shad. They would drive into a pocket that looked promising from a distance, and if they saw grass but no shad then they would continue to cover water. Often times they focused on the sighting of birds to indicate that shad were nearby.

Once they found a pocket they liked, they would sometimes push the shad with their boat to drive them to the back of the pocket. This would cause the bass in there to begin feeding and Indiana would capitalize. They would then try to drive the shad back out of the pocket to pick up a bite or two in the deeper water.

“I used a Local Hooker Rod with 15-pound Vicious fluorocarbon and a Team Supreme 50/50 Spinnerbait most of the week,” said Vaal.

While Bressler used a Team Supreme skirt on a custom chatterbait-type lure. 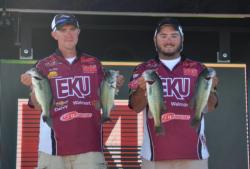 Kyle Raymer and John Smith started the week in second place with 12 pounds, 11 ounces. They followed that up with 10-4 on day two and 10-15 today, bringing their three-day total to 33-14. That earned the Eastern Kentucky team the third place spot.

“The waves got up today which made it so we couldn’t really run around as much as we wanted,” said Raymer.

“We had to figure out what the fish were doing each day, it seemed like they were located different each day,” Smith followed up.

EKU also fished in the back of Peppenhorst, only they focused on the right branch of the area.

A Strike King buzzbait and spinnerbait were responsible for several of the fish that Raymer and Smith caught throughout the week. A black/blue Strike King tube also caught fish when they flipped to cover. 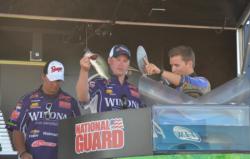 Cade Laufenberg and Sam Schollmeier got off to a rough start at the beginning of the week with a 9-pound, 11-ounce limit. The Warriors then stepped it up and whacked a 17-13 stringer on day two, giving them a 15-ounce lead to start the final day. Winona was the only team today that didn’t catch a limit and weighed 5-11. Their three-day total was 33-3, dropping them into the fourth spot.

Laufenberg and Schollmeier were fishing in Peppenhorst as well, sharing water with Purdue all week.

“It was a slow start, we caught a couple short fish early but didn’t get a keeper until 9:30 a.m.,” said Laufenberg. “After that we had our three fish by 10:15. The pressure was on to fill our limit, and around noon we scrapped our game plan and gambled. If we would have stayed put, we would have caught a limit. Decision making is what killed us today.”

The “swagger” bait that was so vital for the team was a Revenge Baits bladed swim jig with a swimbait used as the trailer.

Laufenberg wanted to thank Lethal Weapon lures for all of their support. 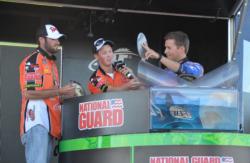 To make a good team in fishing usually it helps to understand how the other guy thinks and fishes. For the two Huff cousins, Nick and Mike, this comes very naturally to them. They each are 22-years-old, are seniors in communication and grew up less than 100 yards from each other.

Georgetown was the only team that made the cut who was focused on an entirely different pattern. While most schools followed the fish into the flooded grass and wood, Nick and Mike focused on rock banks.

“We would pitch our bait up to the rocks and fish it back two or three hops; once it got into about 5 or 6 feet we just reeled in,” said Mike. “All of our fish came in 5 feet or less.”

The team switched their attention to the mouth of Allen Branch today where they found a sweet spot. The Huffs put four keepers in the boat in about four minutes while fishing a 20 foot stretch of rocks. This was a spot that they hadn’t fished all week.

The duo pitched a Texas-rigged Trixie Sweet Beaver on a 4/0 Gamakatsu hook, or a 3/0 Trokar with a 3/16-ounce weight.