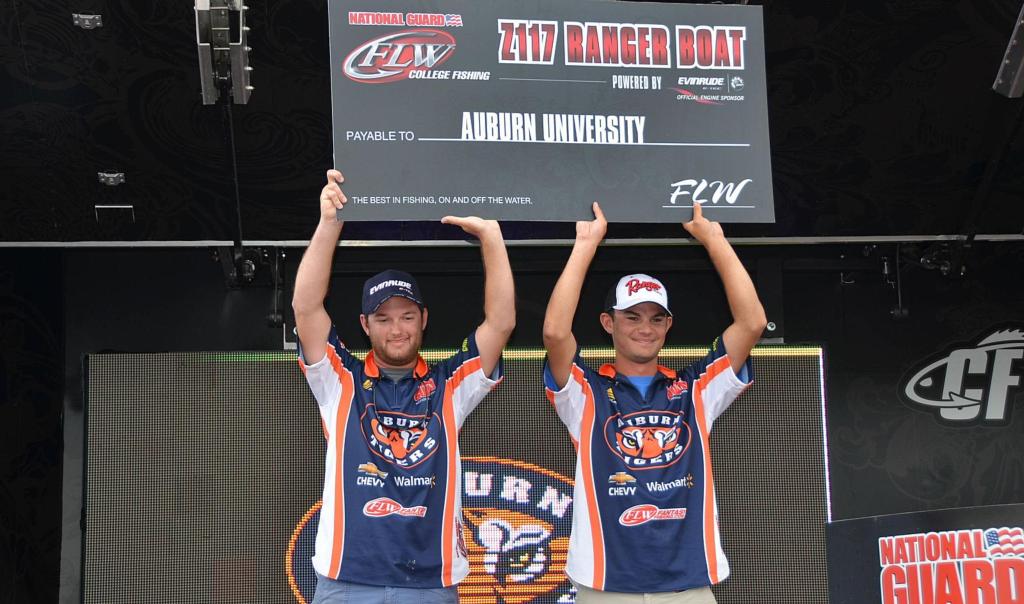 While Lake Wylie is known primarily as a dock-skipping lake, Jordan Lee and Shane Powell resisted any urge to head to the bank. With the Charlotte area receiving warm temperatures as of late, it felt more like summer than fall – and the fish were positioned accordingly.

On days one and two, Auburn put together 12-pound limits and established a sizeable lead. After catching a limit by 9 a.m. this morning, the outcome was never in question. A midday flurry brought several culls and Auburn’s final tally was 11 pounds, 8 pounds. With a total weight of 35 pounds, 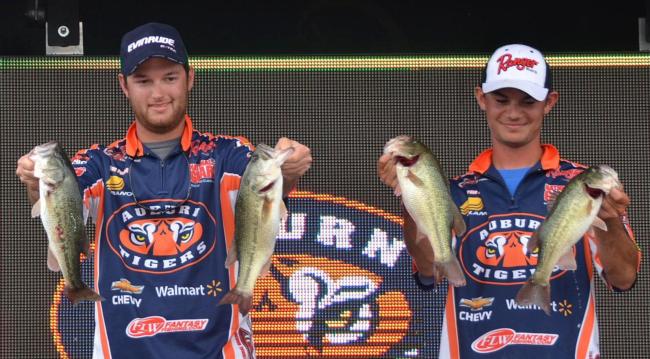 14 ounces, the Tigers won by a staggering 5-pound, 1-ounce margin.

“We caught so many fish this week our hands are just tore up,” said Lee a senior in business marketing.

Auburn’s first spot of the day yielded a few keepers and they finished a five-bass limit at spot No. 2. The bite then slowed for a few hours until they hit the mother lode.

“We pulled up to a new spot and we caught them every cast for about 30 to 45 minutes,” said Powell. “It was unreal – doubles everywhere. Knowing we had the tournament won, we decided to head in early just to be on the safe side.”

“We probably caught more fish on the crankbaits, but the swimbaits were key for the bigger fish,” explained Powell. “We can’t take all the credit, because we didn’t find these areas ourselves. But I can

tell you that other competitors fished the same places and didn’t have nearly the same success.”

“We would cast the crankbait, let out like 300 yards of line off the spool, leave the bait on top and then make sure we were in exactly the right spot,” said Lee. “Then we’d burn the crankbait as fast as we could – just digging it off the bottom. Once the school was fired up with the crankbait, we’d come back with the swimbait for the bigger bites.”

“This is real special,” said Lee. “We’ve come so close – a lot of second through fourths. There’s nothing like winning.” 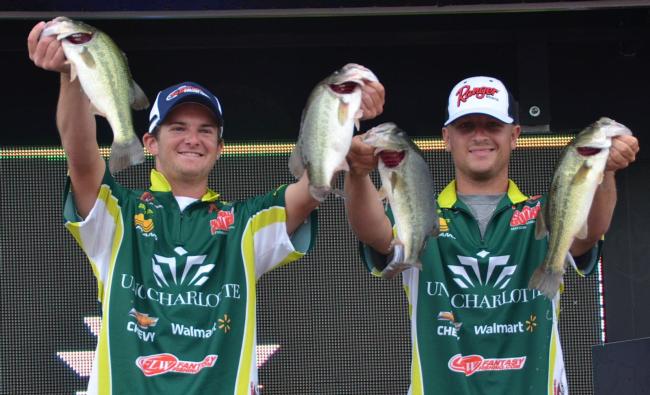 skipped docks they knew were productive from past experience.

Late on day two, they located a school of wolfpack bass that were patrolling a cluster of spawning bluegills, which just moved up with the full moon. UNC Charlotte’s five-bass limit Saturday weighed 11 pounds, 3 ounces, their heaviest stringer of the week.

“We saw over 20 pounds of fish today with their nose on the bank; they just wouldn’t cooperate and bite,” said Lehew, the former TBF Junior National Champion.

After three successful days of practice the 49ers thought they had a legitimate shot of winning.

“They dropped the water and that hurt us a lot,” said Waters. “It just didn’t work out for us.”

IRSC up to third 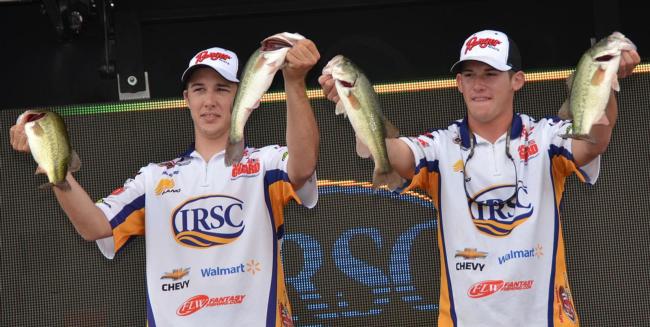 who made the 12-hour drive up from Okeechobee, Fla. And Kyle Monti and Mike Cornell didn’t disappoint – catching a 10-pound limit to move up from fourth to third. IRSC finished the event with a three-day cumulative weight of 29 pounds, 3 ounces. They earned $3,000.

For most of the week Monti and Cornell threw a custom Medlock jig with a chunk around hard pieces of cover such as docks and lay-downs. They started up the river today and with 45 minutes left to fish saw a pack of bass schooling.

“We picked up a rattletrap and filled our limit in a hurry,” said Monti.

After winning the season opener on their home lake, this was just Monti and Cornell’s second FLW College Fishing event.

“I think we proved this week that we can catch them outside of Florida,” added Cornell. 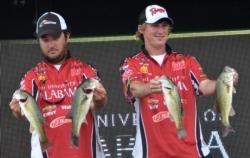 While they stayed consistent with their third consecutive 9-pound plus stringer, Alabama fell from second to fourth as the other teams enjoyed an improved bite with the cloudy conditions. Their official day-three weight was 9-4, bringing their total to 29 pounds, 1 ounce.

Johnson and his partner, Dustin Connell, targeted these transitioning fish by throwing topwaters, skipping docks and flipping lay-downs. On Connell’s third cast of the morning he caught a nice keeper on a Spook. Because the bass were following bait, Alabama fished all new water today.

“This is the first time we’ve made the National Championship, so it’s been an awesome week,” said Connell. “I hate that we didn’t take over Auburn but I promise you we will on the football field.”

Despite catching their heaviest stringer of the week, the University of Central Florida failed to gain any 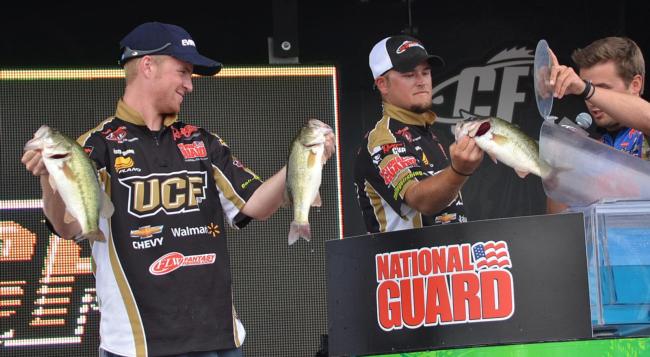 ground in the standings. Their day-three catch weighed 11 pounds, 1 ounce, pushing their cumulative weight for the week to 27 pounds, 3 ounces. For fifth place, they earned $3,000.

UCF’s plan going into the tournament was to fish points following bottlenecks in creeks with a Carolina Rig. That plan didn’t pan out so they went shallow and stayed shallow for the rest of the week. On day two, they discovered a flat adjacent to deep water that had shad cruising all around. This caused the fish to roam instead of being tightly positioned under docks.

“We caught most of our fish today on a Strike King Red Eye Shad,” said Miles Burghoff, who won the BFL Super Tournament on nearby High Rock Lake two weeks ago. “We also caught some on a 1/2-ounce ChatterBait and I caught one this morning on a spinnerbait.”

“The key for us was to find shad-orientated areas,” said Casey O’Donnell, whose kicker on day two launched UCF into their third consecutive National Championship.