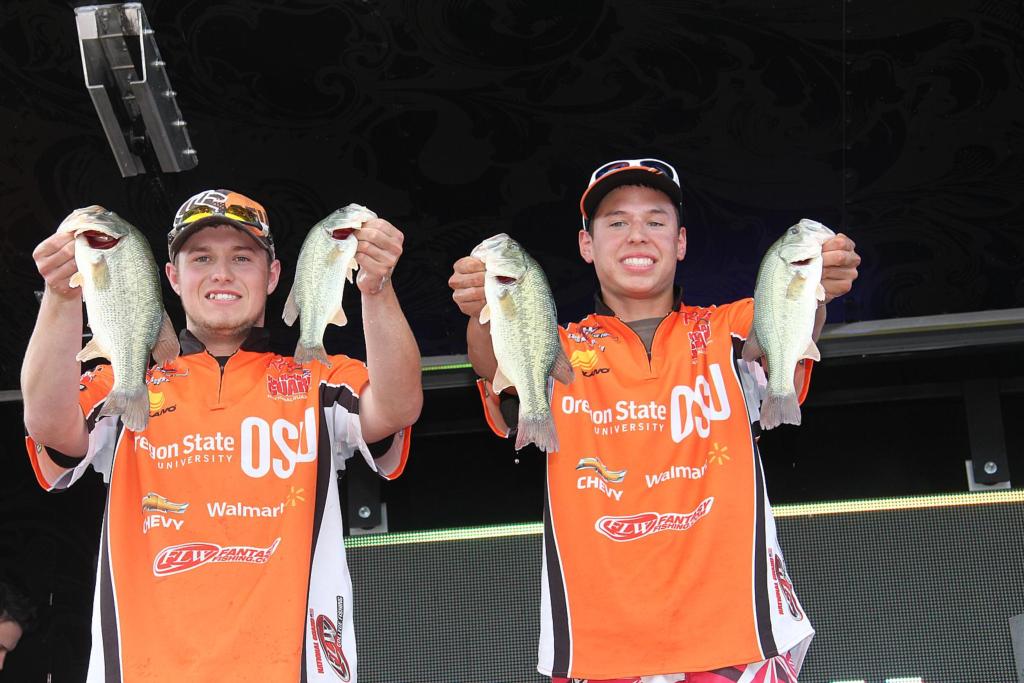 (Editor’s note: Leading up to the 2013 FLW College Fishing National Championship – slated for April 19-21 on Beaver Lake in Rodgers, Ark. – CollegeFishing.com will publish weekly, in-depth features stories of each of the 25 national championship team qualifiers. At stake in the tournament is a first-place prize package that includes $30,000 in cash, a brand new, Ranger Z-117 bass boat and an automatic berth in the 2013 Forrest Wood Cup.)

Other interests: My interests include four-wheeling, hunting, baseball and, basketball, golf and anything outdoors.
Name: Zach MacDonald (pictured on right)

Other interests: Anything outdoors is always great. But bass fishing is definitely my favorite hobby and passion.

Ryan Sparks: Being from Alaska I grew up fishing my entire life. However, I had never even seen a bass until I moved to Oregon. Salmon fishing is one of my favorite things in the world and it is probably what I am best at. My dad is a commercial fisherman along with the rest of my family (my grandpa, dad, uncle and cousin all have their own boats). I moved to Oregon during elementary school and went to Alaska every summer my entire life – and still do. We moved to Seaside, Ore., and my grandpa had a little bass pond where my dad took my sister and me fishing for largemouth and bluegill. Then, my neighbor started taking me to some of the bigger lakes and I was hooked on bass fishing! My true passion is being able to wade into streams and fish for steelhead. You just can’t beat being on their turf and fighting a fish on 10-pound test line that might weigh 20 pounds running up and down a small river while jumping 3 feet in the air.

Zach MacDonald: I first started fishing when I was 3 years old with my dad and older brother. I started getting into competitive fishing when I was 14, fished a lot of pro-am circuits while I was in high school and participated in some team circuits in Clear Lake, Calif. And I’ve been hooked ever since.

Ryan Sparks: Other than steelhead fishing, my best technique would probably be drop-shot fishing – which I am pretty good at it. But that technique is not my favorite. Jig fishing is a close second and I’m very comfortable using this technique. It’s also one of my favorite ways to fish.

Zach MacDonald: I’m comfortable with a lot of fishing methods but my favorite by far would be frog fishing.

CollegeFishing.com: What did it feel like to qualify for the 2013 FLW College Fishing National Championship? How do you plan to prepare for the big event?

Ryan Sparks: I can’t even describe the feeling. It’s like a surreal moment because I have always looked at myself as a purely salmon/steelhead fisherman and I’ve always just gone bass fishing for fun. When I saw people fishing on TV, I always told myself that’s what I want to do for a living because I probably fish close to 250 days a year. I mean, what better than to make your career fishing? Now it feels like I am one step closer and it just may happen – and I am so thankful for that. But I’m also aware than none of this would be possible if it weren’t for FLW and all of the great sponsors that put on the events for us.

To prepare for nationals, I want to get as much information as possible. I really want to pre-fish Beaver Lake but it’s on the opposite end of the country from us. It would cost a lot of money to fish there for even a few days so we are just going to save up for the tournament. One of my great friends and fishing buddies is Jay Yelas and he has fished there a lot and has already given me a great game plan for the tournament – and hopefully the winning one. Plus it’s Beaver Lake so the (Oregon State) beavers are supposed to win, right? I think that would make a good article title – Beavers win Beaver. But no matter what happens, this is going to be one of the greatest experiences of my life. I’m truly honored to be on such a big stage while getting a chance to fish with some of the greatest fisherman in the nation.

Zach MacDonald: I couldn’t even find words to describe how it felt to qualify, especially as a freshman. But after we knew we were fishing in the conference finals, we simply concentrated on how we could win the event.

Our plans for preparation starts the same as any other tournament – a lot of research, map study, watching the weather and finally getting on the lake to pre-fish.

Ryan Sparks: I am 1/8th Alaskan native and a part of the Tlingit Tribe. I am involved with the Native American community in Haines, Alaska. Another interesting thing is I almost didn’t go to my very first tournament. It was a “Civil War” tournament against Oregon and I called my friend in Alaska and he convinced me to enter it. Ultimately, I ended up winning the event which helped to build up my confidence level and encourage me to start fishing FLW tournaments.

Zach MacDonald: Not only do I have a passion for the great outdoors, but I also love to cook – especially BBQ.