At the FLW College Fishing Southeastern Invitational Oct. 18-19, Lake Chickamauga reminded anglers of its more famous brother to the south, Lake Guntersville in Alabama. It was laden with thick grass mats, topped out amid the changing leaves of autumn, which competitors tackled with frogs and punching gear. Not surprisingly, schools from Alabama with ample experience in the green stuff took the top three spots. 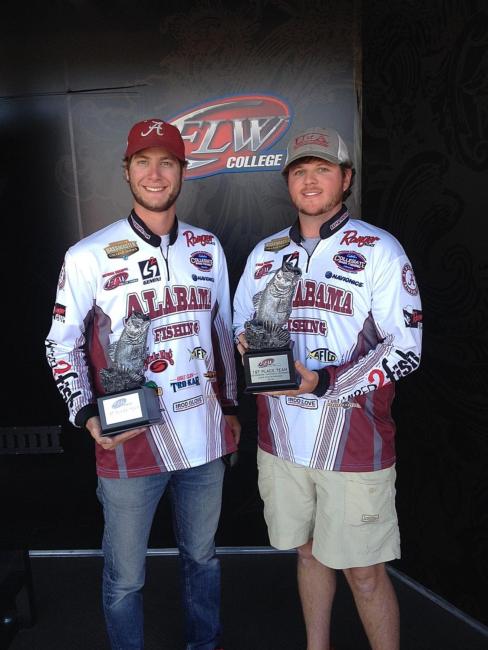 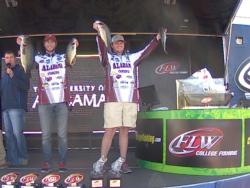 The University of Alabama team of Keith Kirkley of Northport, Ala., and Frankie Appaluccio of Tuscaloosa, Ala., focused on matted grass as well as a key spot where the grass was not quite matted to the surface for the win at Chickamauga.

“We were on them in practice and thought we could catch 17 to 18 pounds pretty easily,” says Kirkley.

However, the fishing proved to be much tougher than they expected once the tournament began. Kirkley and Appaluccio landed just five keepers the first day, with the final fish coming only eight minutes before they were due to come in to boat check. 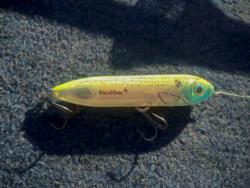 “Most of our spots on the lake were full of grass mats, but we had one point where the grass wasn’t all the way up to the surface,” says Kirkley. “We started on that point and caught one on a [Heddon] Spook Jr. topwater bait.”

After that they fished a black SPRO Bronzeye Frog and a green-and-yellow popping frog in the thick grass, but that yielded just one fish.

“The frog bite just wasn’t on like it was in practice, so we ran into the back of a marina and caught two more keepers on a Zoom Fluke fishing near docks,” says Kirkley.

At that point, Kirkley and Appaluccio had only four keepers and were quickly running out of time. They made the decision to return close to the launch ramp at Chester Frost Park.

“The big point right by the ramp is full of grass,” says Kirkley. “It’s basically just one big grass mat around it. We fished the frog and were able to land our fifth keeper right at the end of the day.”

The buzzer-beater gave Alabama 12 pounds, 8 ounces, which was good enough for sixth place after the first day of competition. 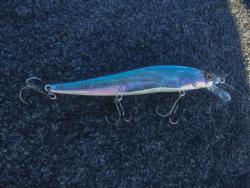 The second day started off much faster, and the Crimson Tide anglers were able to land a limit of bass in the first hour by fishing their original point, the one without matted grass, with a Megabass Vision 110 jerkbait and a Spook Jr. topwater.

They caught one more fish on topwater, then transitioned to the frog the rest of the day in search of a kicker bite. It happened late in the day on the grass mats around Chester Frost.

“Frankie caught one that was 8 pounds, 13 ounces, and when he got it in the boat we freaked out,” says Kirley. “We didn’t know at the time, but that fish got us the win.” 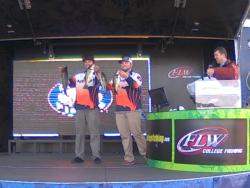 A midmorning decision on the first day proved to be the difference for Auburn University’s Ben Curry of Hayden, Ala., and Timmy Ward of Auburn, Ala. After an unproductive morning trying umbrella rigs in deeper water, the team had an empty livewell and began tossing around a new plan.

“We didn’t have a fish and were already thinking about coming back out the next day if we didn’t make the [top-15] cut just to have a good time,” recalls Ward. “Ben asked what I would do if it was just for fun, and I said I’d punch and throw a frog all day.”

That quick conversation changed the course of the event. At about 10 a.m., the Tigers decided to scrap the umbrella rig in favor of punching and frogging in one area for the rest of the tournament.

“We had a really rough practice, and really the only place we got bites was on the lower end of the lake, right off of the main river,” recalls Ward. “It was an area about 300 yards long and close to Harrison Bay, and it was filled with grass mats.”

The duo relied on a SPRO Bronzeye Frog in the killer gill color as well as a Missile Baits D Bomb in the super bug color. They fished both baits on 65-pound-test PowerPro braid. 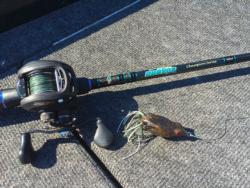 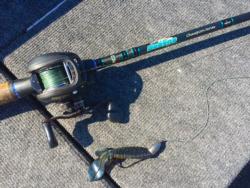 “We had our first bite around 11, and it was basically one an hour after that,” adds Ward.

They ended the day with four fish for 11 pounds 14 ounces and were in seventh place.

Auburn’s strategy was simple: The teammates punched mats, and if one of the anglers saw a fish surface or roll under the grass, both would cast their frogs to the area. This approach yielded several fish, including the biggest on the first day.

On the second day, Curry and Ward started in the grassy area and never left. They never even fired the big motor until it was time to head in. They caught four fish for 16 pounds, 5 ounces to jump up to second place.

“It was much windier on the second day, so we punched that area whole time,” adds Ward. 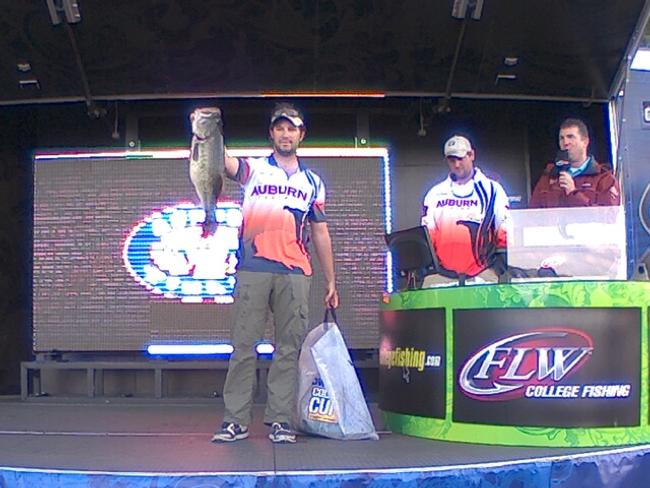 Candler McCollum of Auburn, Ala., and William Bates of Suwanee, Ga., had just six fish for two days on Chickamauga, but their weight-per-fish average was impressive. They weighed 25 pounds, 9 ounces, buoyed by a giant 10-pound bass caught by McCollum on the first day.

“We practiced in separate boats to cover more water and really tried hard to find fish in something other than grass, but that is the only place we could get bites,” says McCollum. “We decided to commit to the grass bite and punched with Missile Baits D Bombs and Reaction Innovations Sweet Beavers.”

Even though they were able to achieve a high finish, Auburn’s event did not start as planned.

“We ran south for our first spot, and when we got there, four boats were exactly where we wanted to fish,” McCollum says. “There was another tournament at that end of the lake, and they beat us to it.”

The Tigers scrambled and ran up north, where their first fish of the day was the 10-pounder.

“I pitched in, and it just felt heavy,” recalls McCollum. “I knew it was a decent one, but we didn’t know just how big it was until it started tail-walking next to the boat.”

Once the toad was in the boat and both anglers had settled down, they understandably decided to punch grass for the remainder of the tournament. Not only was it the big-fish producer, but punching also yielded a higher landing percentage compared to frogs, which weren’t hooking up for the teammates in practice.

They weighed 17 pounds, 3 ounces the first day, just 6 ounces out of the lead.

The second day proved to be more of a challenge as McCollum and Bates failed to back up the first-day trophy catch. Still, their two bass for 8 pounds, 6 ounces was good enough to keep them in the top three with a tournament total of 25 pounds, 9 ounces.