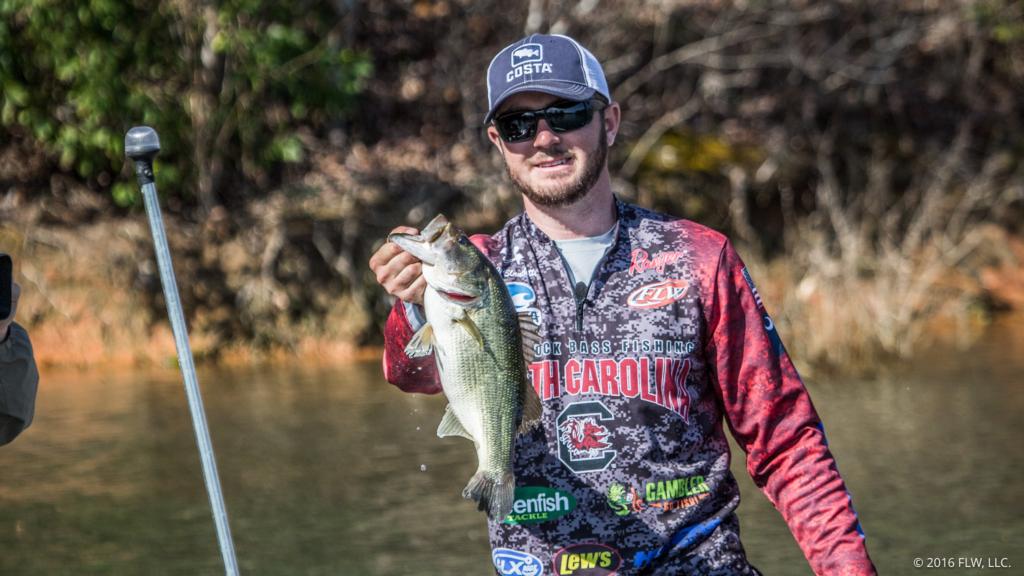 With one hour left to fish, South Carolina just added a 3 1/4 pound fish. They have 13 pounds now. Auburn has culled twice and has at least 10 pounds. The previous updates still stand and the final weigh-in could come down to ounces.

A blanket of cloud cover has moved over Keowee. Possibly rain is in the near future. Anglers have 90 more minutes to take their shot at the National Championship.

Colorado Mesa has 11 pounds today, giving them approximately 37 or 38 pounds. UNA has 8 pounds, for an unofficial total of 33. Our estimate for the leaders is 6 1/2 pounds today. They might have 36 pounds total. This is going to be so close.

The Redbirds are running and gunning now. Don't feel too bad for A&M though. Illinois State left the Aggies in the pocket that produced the leaders' 5-pounder yesterday. Also, the two teams might be sharing snacks and tackle – HA. Might as well.

Illinois State has also named its best pockets. There's Golf Course Pond, Cruiser Cove and Magic Dock. They're hoping for some magic right now, and they might need it.

Last we heard, Colorado Mesa is the unofficial leader. We're heading to get a more accurate weight estimate now. Also, North Alabama has been smokin' fish lately. They just need a couple big bites and they could pull ahead.

In a selfless act of sportsmanship, Texas A&M anglers Josh Bensema and Matthew McArdle gave up their boat for Illinois State anglers Bryce Wegman and Taylor Umland. The Aggies initially pulled into the pocket and offered the rig, but the Redbirds declined. After Texas A&M insisted, Umland and Wegman called the tournament director to see if it was allowed. Initially, the director said they could swap, but only if they returned to the ramp – some 20 miles away — for a restart. That would've left only an hour to fish, so the two teams parted company.

Fifteen minutes later, the tournament director called back and said they could go for it. So the Aggies returned, and the two teams swapped boats.

A&M, which started the day in 10th place, has a 3 1/2-pound kicker, but the team will fish the remainder of the day in Illinois State's broken-down rig, with only trolling motor power. Illinois State can now run to its prime spots and will return and give A&M a lift back to weigh-in.

As the two teams parted, a few lighthearted jokes were exchanged. "Now we're in the lucky boat," said one of the Aggies. "Just don't forget to pick us up."

Now that the bad news of being restricted to the trolling motor has sunk in and the Redbirds are refocused on fishing, good things are happening. Wegman just landed a nice 2 1/2-pounder on a buzz bait. "He blew it up like it was a 4-pounder," he says. Wegman made four casts at the laydown that produced the 2 1/2 before the fish finally ate. Their spirits are renewed now. They made contact with Texas A&M and have a ride lined up to weigh-in. Now it's time to do work.

Other updates: Dallas Baptist has two keepers. Adrian's limit weight is about 7 pounds.

There's a light breeze blowing now, and the sun is high in the sky. Light, fluffy clouds continue to slip by with no sig on rain.

Having a limit at 11 a.m. sounds great, but Illinois State is dead in the water right now. The Redbirds spun their prop, and the replacement that was brought to them didn't fit. There's not enough time to be towed back to takeoff for a restart, so they're going to have to fish by trolling motor and hitch a ride back with one of the other teams. Texas A&M is fishing nearby and should be able to give them a ride.

Other updates: South Carolina has five for 10 pounds. Auburn has three little keepers. Adrian has three fish for about 4 pounds.

UPDATE: Adrian has since filled its limit.

The sun is out now, and along with its heat has come a surge in the action. Colorado Mesa just checked in with a 2 3/4-pound spotted bass. University of South Carolina landed a great kicker – a 4-pounder. North Alabama is still sitting tight with a limit of around 7 pounds. Several other small fish have been caught by the top 10.

The biggest story of the morning, though, is in the boat of Illinois State. Wegman and Umland are having mechanical issues. They spun a hub. Following a convsersation with Tournament Director Kevin Hunt to make sure the act was within the rules, a local angler who's helping the TV crew this week contacted another local who has a new prop and hub. He's bringing it to the lake, and in an hour or so the Redbirds will be able to change out the prop and be back in business. It was a minor setback, since they're still able to fish by trolling motor and are staying in a cluster of pockets in the same area anyway. But there were some tense moments at first when they though they might not make it back to weigh-in.

"It feels good to have three," says Taylor Umland of Illinois State. The Redbirds have three small spotted bass in the boat. One is a squeaker, but having three takes away a little of the pressure of being the leaders. Not that Umland and partner Bryce Wegman are feeling much pressure. They might be the most relaxed anglers to go into the final day of a national championship in the lead. They're chatting with the TV cameraman, fishing at a comfortable pace and basically waiting patiently for their better quality fish to move up.

Umland and Wegman are fishing finesse plastics almost exclusively, but winding a buzz bait every now and then.

Only a couple of other teams have reported keepers thus far, including the University of South Carolina, who checked in with a 1 1/2-pound bass, and UNA, who has culled twice and has about 7 pounds.

What does Mother Nature have in store for the top 10 teams on the final day of the 2016 FLW College Fishing National Championship on Lake Keowee? That’s the question of the day.

There’s virtually no wind, but a dull hazy sky should help the reaction bite for spotted bass this morning. If the rain does come, it should continue later in the day. Most teams expect to be catching plenty of bass today.

The top team from Illinois State is making a long run first thing this morning – the longest of any team in the top 10. The Redbirds are fishing the spot that produced more than 17 pounds yesterday. Can they keep the pace? We’ll keep you posted.