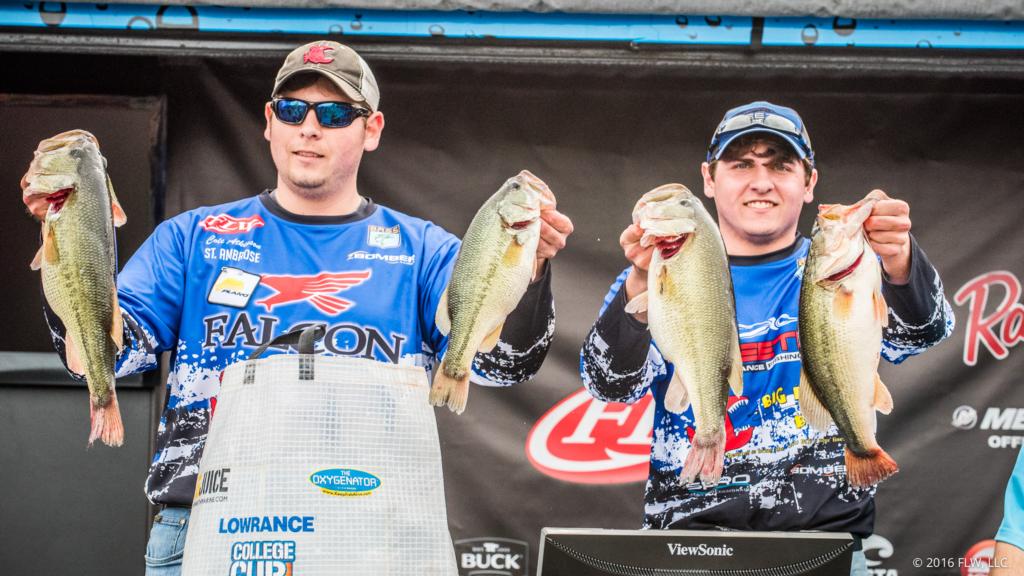 Although the tournament isn’t over and the race is tight heading into the second and final round of the FLW College Fishing Kentucky Lake Open, at least brothers Tanner and Cole Atkinson of St. Ambrose University have already proved that bass are bass wherever they swim.

Kentucky Lake has little in common with the Mississippi River near Davenport, Ia., where the brothers live and fish, but they made themselves right at home on the big TVA impoundment Friday. Fishing a milk run in a relatively large area of the mid-lake, the Atkinsons took the tournament lead with 21 pounds, 8 ounces. Taylor Umland and Justin Schick of Illinois State University are currently second with 20-6.

“This is nothing like we’re used to fishing,” says Cole of Kentucky Lake. “It’s all current and weeds where we usually fish, but there are enough common denominators for us to do well in this tournament if we can get on the right kind of bites.”

According to Cole (junior marketing and accounting major), he and Tanner (freshman nursing major) are fishing the same bait, but varying the colors. They’re also keying on a “special” type of rock that is attracting bass moving up from deeper water. The water depth varies from shallow to about 8 feet. Though several other anglers reported that they boated their best fish early in the day, it was a different story for the Atkinson brothers, whose biggest fish weighed 5-14 and 5-12.

“We caught most of our fish toward the middle of the day,” reports Cole. “I can’t explain why that is, but it doesn’t seem to matter if we’re there first thing. We’re in the second to last flight on Saturday, and that might work to our advantage.”

Though Cole won’t reveal where the brothers were fishing until the final weigh-in at Moors Resort & Marina, he says there were no other college anglers fishing around them.

“We lost one 3-pounder at the boat, but other than that we fished pretty clean,” he adds. “We caught eight keepers, but only one of them culled. So Saturday it all depends on whether we can get on some bigger fish like we caught on Friday and make them bite.”

No big bass awards are up for grabs in the Kentucky Lake Open, but a few lunkers were weighed Friday. Atop the unofficial leader board is Patrick Clark of Bellarmine University with a 5-pound, 3-ounce smallmouth and Austin Moore of Campbellsville University with a 7-pound, 9-ounce largemouth. 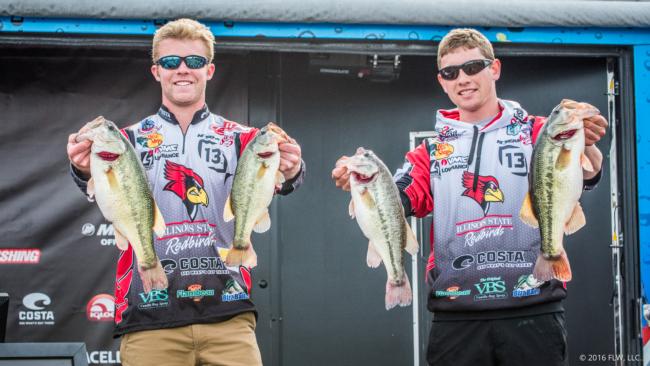 The Redbirds experienced their best fishing early and had a trio of 5-pound-class fish in the livewell by 10:30. After that, according to Umland, they had to scramble to get two more keepers. Umbrella rigs and ZMan Chatterbaits produced most of the seven fish they caught.

“We culled a couple of times, but they were all dinks. It was pretty slow for us through the middle of the day and especially in the afternoon,” says Umland, a senior marketing and sale major. Schick is a sophomore majoring in finance. “So we know we’ve got a good starting spot, but we need to find a better afternoon place. 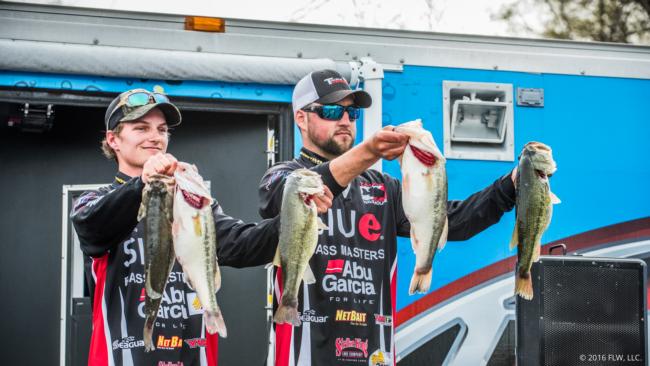 “We didn’t catch a ton of keepers, but the right size is there,” says Wesley, a senior. “We caught fish here and there and broke off a couple of better fish. We’re really covering a lot of water and trying to make the most of the bites we get.”

Spinnerbaits, crankbaits and jigs were their most productive lures, according to Hartnagel. SIU-Edwardsville, of the Central Conference, placed sixth in the 2015 Open and fished the recent FLW College Fishing National Championship on Lake Keowee. Wesley and Hartnagel figure the Open gives them their best chance of reaching the 2017 Championship, and were focused on managing their fish Friday.

“We fished our best area for about an hour and then left it alone,” says Hartnagel. “We’re saving it for Saturday, but if the wind gets up, it’s going to be an uncomfortable ride. Even then, the wind might affect how well we can fish the area.” 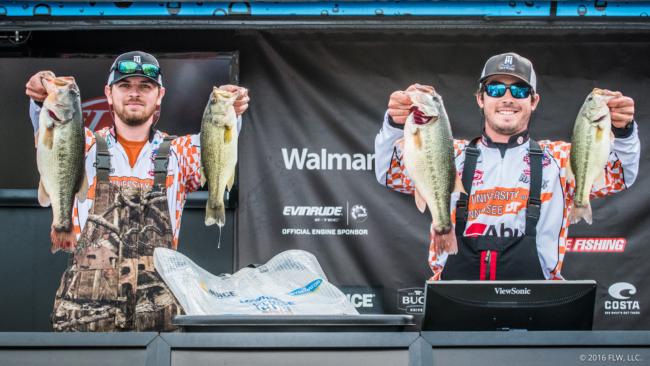 When FLW College Fishing Director of Tournaments Kevin Hunt asked Emmert and Johnson if they recalled that the first ever College Fishing Championship weigh-in was staged on the University of Tennessee campus, the pair seemed surprised to learn it. Why not; they were just entering their high school years when the first championship took place in 2010 on Fort Loudoun Lake near Knoxville.

The pair are well-versed on bass fishing, if not bass-fishing history, however. Johnson got the team off to a good start with a pair of 6-pounders caught early. The pair eventually fished their way into a “big bay” where they fished for three hours and filled out their limit.

“We noticed that the fish we caught later in the morning were holding over pebble-rock bottom. The fish shut down after 1, but that’s OK, because our two biggest fish came early,” says Emmert. “We’re in the first flight on Saturday, so we’re looking forward to getting an earlier start.” 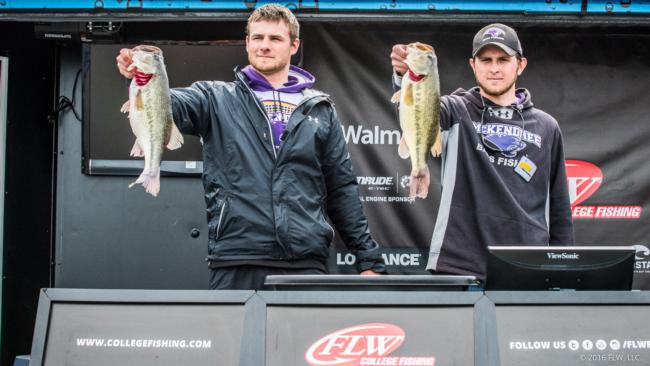 Three Illinois squads, including McKendree University of Lebanon, Ill., are in the top five, and like the other teams from its home state, McKendree has limited experience on Kentucky Lake. Perhaps that’s a good thing; at least it didn’t restrict Wilke and Robinson. The latter caught a 5 ½-pounder soon after setting down at the north end of the lake and Wilke followed with a 4 ½-pounder soon after.

Though the pair wouldn’t reveal their baits or tactics, Johnson said they did feel confident about their chances Saturday.

“There are some good fish in the area we’re fishing and they should be there Saturday. Hopefully they’ll be more aggressive as the weather settles down some,” says Robinson.

The team fished last year’s Kentucky Lake Open and finished back in the pack. But, according to Wilke, they learned from their mistakes.

“We caught our five best keepers right off the bat and then fished some other areas to see what was going on there,” says Wilke. “We should do as well or better than Friday, but it sure would be nice to get one or two of those big ones like were being caught in practice.”