UW-Platteville Wins on the Mississippi 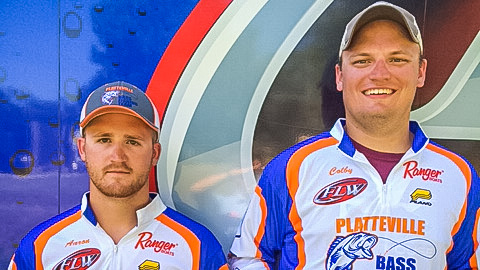 The University of Wisconsin-Platteville team of Colby Peterson of Waupun, Wisconsin, and Aaron Gohla of Houlton, Wisconsin, won the FLW College Fishing Central Conference event on the Mississippi River Saturday with five bass weighing 14 pounds, 8 ounces. The victory earned the club $2,000 and advanced the team to the 2017 FLW College Fishing National Championship.

“If we hadn’t qualified for the National Championship, today would’ve been my last college fishing tournament,” says Gohla, a senior majoring in mechanical engineering. “It was a great day and I hope this win gets the club some more recognition. It’s great exposure for our school.”

“We held our own out there, but never expected to win,” says Peterson, a senior majoring in industrial technology management. “We’re two of our club’s oldest members so I guess it was our turn.”

The team says they spent their day in Pool No. 9 scouring a 300-yard stretch of weedline near Lynxville. They say they caught all of their keepers between 8:30 a.m. and 10 a.m. using two different baits.

“The weedline had a deep edge and a strong current running near it,” says Gohla. “I used a black and blue-colored Yamamoto Senko with a ¼-ounce weight. Colby (Peterson) threw a black and blue Berkley Havoc Pit Boss and caught our heaviest largemouth around 9:15 a.m.”

The duo ended up weighing in three largemouth and two smallmouth.

“The smallmouth came from a 30-yard stretch where the current was hitting the edge hard,” says Peterson. “We kept our lines tight and kept working the baits back toward us. It was tough to gauge how deep the fish were because of the drop. The stretch was basically a bend and we fished the outside of it.”

After two passes along the weedline, Gohla says they made their way back to the takeoff ramp.

“We had to lock back down to Prairie du Chien at 11 a.m. due to all of the barge traffic,” says Gohla. “We only culled once and brought in what we had.”

The top 10 teams that advanced to the 2017 College Fishing National Championship:

This FLW College Fishing Central Conference event was hosted by the Prairie du Chien Area Chamber of Commerce/Tourism Council and was the third and final regular-season qualifying tournament in the Central conference. The next event for Central Conference anglers will be the FLW College Fishing National Championship, held early next spring on a lake yet to be announced.