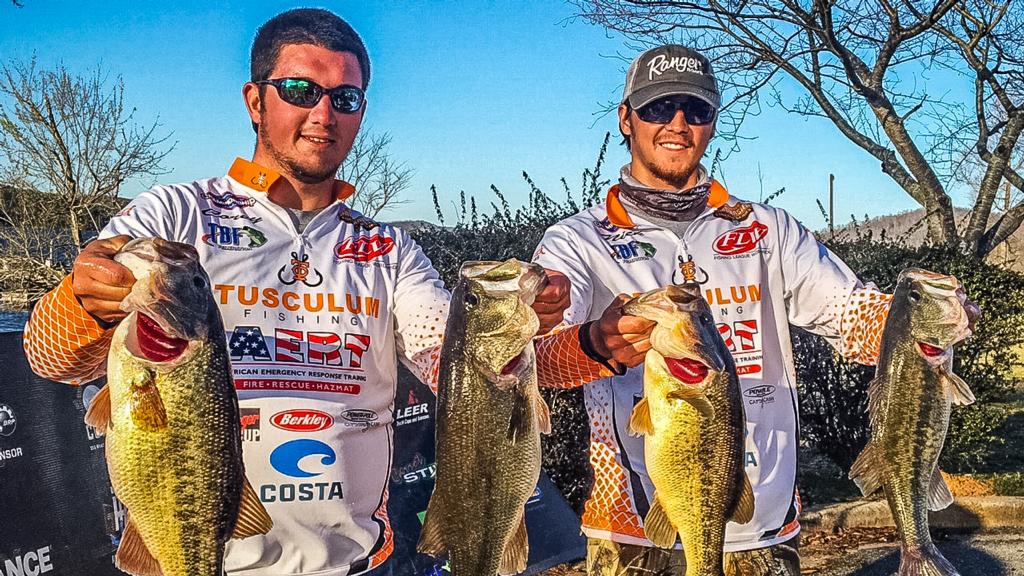 Sometimes the thinnest margins produce the biggest accomplishments in tournament bass fishing, as was the case today at the YETI FLW College Fishing Southeastern Conference event at Lake Guntersville. Nick Hatfield and Corey Neece of Tusculum College won the tournament by a slim 3-ounce margin over runners-up Wesley Griner and Nathan Ragsdale of the University of Georgia, and in the process topped the largest field ever assembled for a college bass fishing tournament – 248 teams.

The new participation record eclipses the previous mark of 214 teams set last season at the Bassmaster College Series Southern Regional at Lake Martin. The previous FLW record was set and later matched in 2016 at the FLW College Fishing Open on Kentucky Lake in April and the Southeastern Conference qualifier at Lake Chickamauga in September.

Participation in college bass fishing circuits has continued to rise since 2009, when FLW launched its College Fishing series, which features no-entry-fee events and the chance to qualify to a national championship. Participation is particularly strong in the Southeast. In 2016, the YETI FLW College Fishing Southeastern Conference averaged 163 two-angler teams per tournament. The division opener in 2017 included 141 teams.

For its win at Guntersville, the Tusculum team of Hatfield and Neece earned a spot in the 2018 FLW College Fishing National Championship. The top 24 teams qualified for the championship from this event: the top 10 plus one additional team for every 10 teams over 100 that participated.

According to Neece, the keys to the team’s success were staying shallow around grass and accommodating for windy, post-frontal conditions.

“We found a lot of fish in practice, but the wind and the mud washed a lot of areas out because it was so bad out there today,” he says. “We had a couple of areas that were protected, and that’s where we caught our fish.”

In addition to the mud, Neece says uprooted eelgrass washed into windblown pockets made their preferred technique of throwing a Strike King Red Eye Shad difficult, which made the decision to dodge the wind even easier. He says the deepest they caught a fish all day was in 2 feet of water.

“They’ve already moved up, and they’re lying there waiting to spawn,” he adds. “You had to fish them real slow and had to pick the area apart to get them to bite, and really we were making multiple casts in the same spot. You know the fish are there. It’s just getting them to bite.”