True, Lamastus out to the early lead with big bag on day one of the College Fishing Open 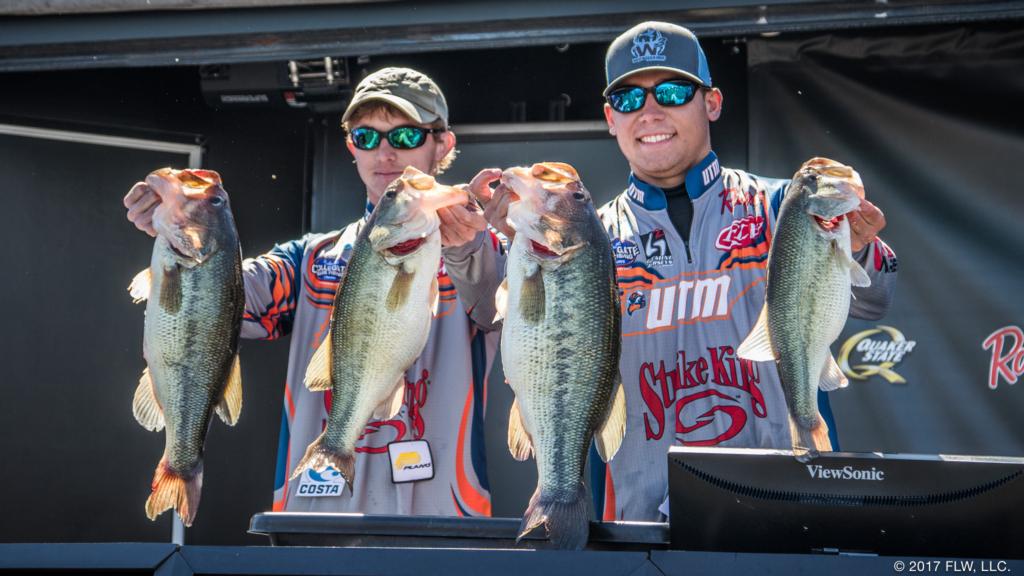 Though not one of the biggest schools to field teams here in the YETI FLW College Open on Kentucky Lake, the University of Tennessee at Martin threatened to turn into a giant killer in the opening round of the two-day event as one of its five squads – Matthew Lamastus and Dylan True – caught a limit weighing 25 pounds, 15 ounces Friday to take the lead. Another UT Martin team, Dalton Bradford and Dylan Fuller, is currently in sixth place.

Nick Montilino and Brock Spencer of nearby Murray State University are currently second in the standings with 24-3, while Carter McNeil and Cole Floyd of Bethel University, located on the southern end of the lake, are third with 22-7.

As anticipated, a passing cold front that dropped the water temperature by a few degrees temporarily scooted many of the bigger prespawn females away from the banks. The front also left behind a blustery wind that gradually strengthened Friday and stymied the efforts of some competitors to make long runs to their preferred fishing waters. Of the 194 teams entered, 171 took fish to the scale, but only 83 of them had limits. Likewise, only a few of the limits included kicker fish in the 5- to 7-pound class; those that did managed to land in the top 10.

Rough water didn’t bother True and Lamastus, because they didn’t go far to box their limit. Still, they were uncertain about their strategy heading into Saturday’s championship round.

“We caught six keepers out of our spot, but it really was a grind,” says True, whose 7-14 lunker caught on a Strike King 2.5 square-bill was the biggest fish of the day. “We found this place in practice earlier in the week when the conditions were better and the fish were moving up. So, it was one here and one there today [Friday], and we need to decide if we’re going to go back Saturday and stay there or try a couple of other places we’ve got.”

True and Lamastus caught the majority of their fish on crankbaits, which seemed to be the lure of choice for most of the contestants, though with some exceptions. A number of teams reported that they cranked up limits early in the morning, then left those fish to go after bigger fish to anchor their stringers. As noted, some succeeded, others didn’t.

The top 20 teams in the event win a spot in the 2018 YETI FLW College Fishing National Championship. Saturday’s final weigh-in begins at 2:30 p.m. at Moors Resort and Marina in Gilbertsville, Ky. 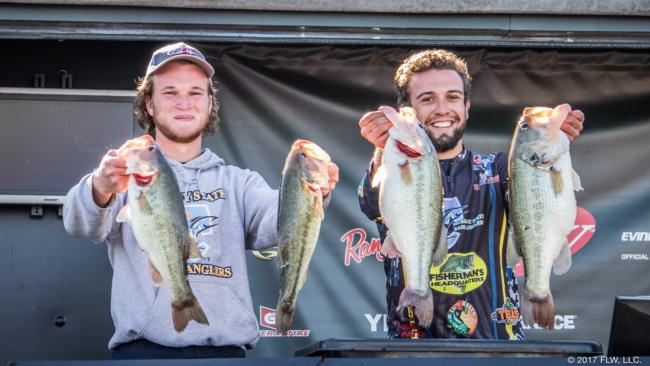 Just when it looked as if the only mystery in the tournament was which Tennessee team was going to win the title, Montilino and Spencer showed up to save the day for one of the home teams. Too bad few fans were there to praise the pair, as the Racers were the last anglers to weigh their catch. Montilino confesses that he and Spencer are fishing a couple of spots, but it’s something of a marathon that requires almost an hour’s run between the two.

“We might start at a different place Saturday, but we’re definitely going back to where we got the 7,” says Montilino, referencing the bass he caught on a jig. They also caught a couple of 5-pounders to go with it – all caught flipping jigs to shoreline cover. 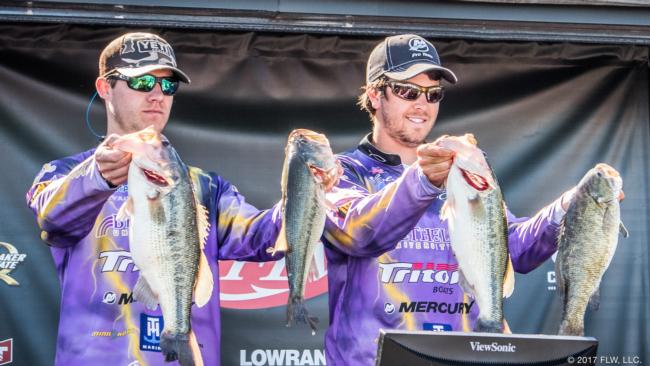 Bethel Coach Garry Mason seemingly always has a team in the top five; the only question this year is which one of the dozen entered it is going to be. This go-around it looks like Carter McNeil and Cole Floyd, though the latter sounded iffy at the weigh-in.

“We might fish a different lake tomorrow [Saturday],” he said, making a cryptic reference to their fishing Barkley in the opening round. Kentucky Lake is calming down Saturday, and the pair could make an all-or-nothing gamble and head for the familiar waters around New Johnsonville, Tenn. McNeil says the pair culled three Barkley bass Friday. 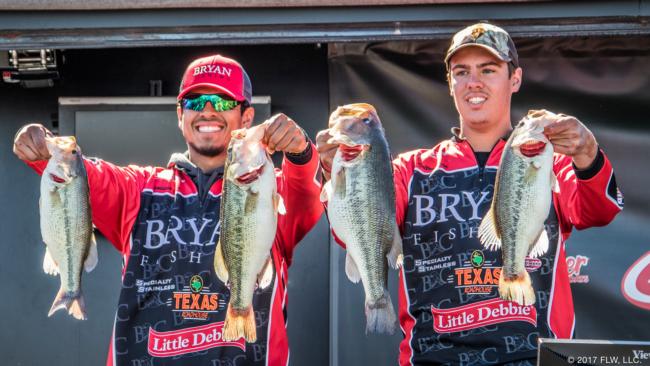 Bryan College more or less overlooks Dayton Boat Dock on Lake Chickamauga, which in itself establishes the team’s bona fides and reason it’s in contention. Several boats are running to Lake Barkley through the canal that connects it with Kentucky Lake, and Price and Colin are in one of them. They cranked up five keepers early, then left the spot and hunted bigger fish. It worked, as their limit was anchored by a 7-pound fish. 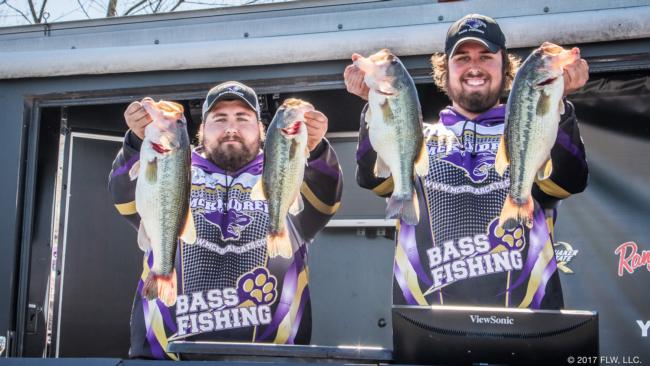 Austin Chapman and Curtis Lilly compose the only team from north of the Mason-Dixon line that is within reasonable striking distance of UT Martin. The Bulldogs of Lebanon, Ill., got on some toads in practice, but as could be said for dozens of anglers in the Open, their bigger fish vamoosed in the wake of the midweek cold front.

“We caught a lot of keepers and had a limit by 9:30, but nothing like the size we were catching pre-fishing,” says Lilly. “We left fish biting, and we’re doing one thing that I’d rather not talk about right now. If some bigger fish move back in there – we’ll see.”