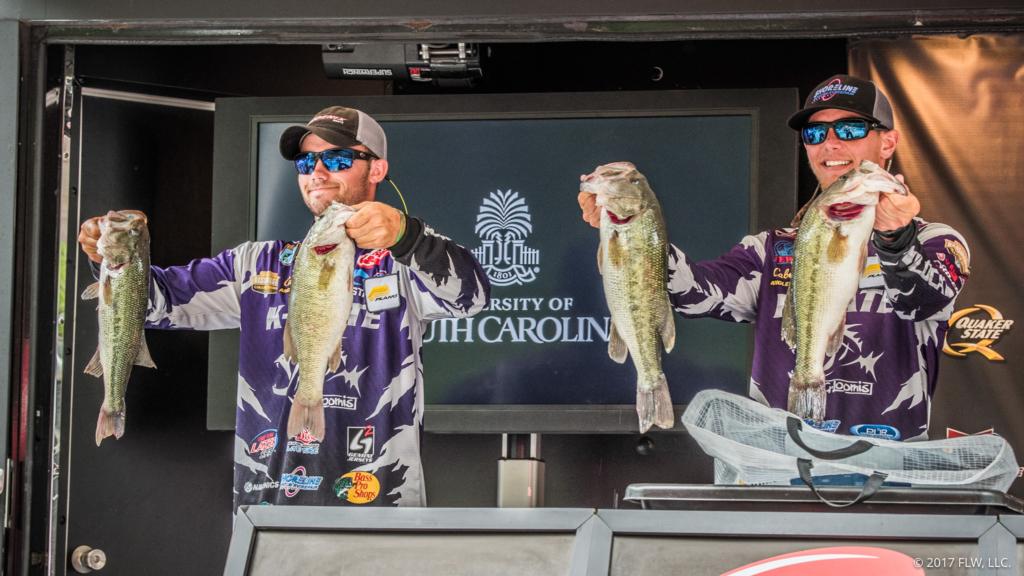 But that wasn’t quite good enough to suit the K-State team. So today Blenn and Alsop went out and did one better – 1 ounce better – for another impressive Wheeler Lake haul of 16 pounds, 9 ounces. With that, the Wildcats jumped from third to first for the tournament lead after day two with a total of 33 pounds, 1 ounce. Their day two limit consisted of four largemouths and a dandy smallmouth.

Blenn and Alsop got their day started on an offshore river bar that produced two big fish on day one. That same spot again produced two quality fish for the team today, thanks in large part to the quick efficiency of teamwork.

“I caught those two fish on back-to-back casts because we work together so well,” Alsop says.

Alsop is quick to point out that because Blenn was quick with the net and able to handle the fish to the livewell, Alsop could quickly make another cast right back into the hot spot.

“It’s all about timing,” he says. “These fish come up and feed so fast that you have to get a bait right back to them.”

“Once he gets a fish on and we get it in the boat, I’ll take the time to put it in the livewell so he can cast again with the same bait to the same place,” Blenn says. “It works. Before I could finish putting the fish in the well, he was hooked up again. That’s what it’s all about.”

After sacking up three fish offshore, the team moved closer to shore to their back-up pattern of pitching shoreline cover to close out their limit. From there, the team moved to an undisclosed location to make four or five nice culls.

“We’ve got a couple of things we’ve been saving,” Blenn says. “We sampled some of it today, and it seemed to work out pretty well. We have one other spot that we have not been to yet, and we can’t wait to try it tomorrow. 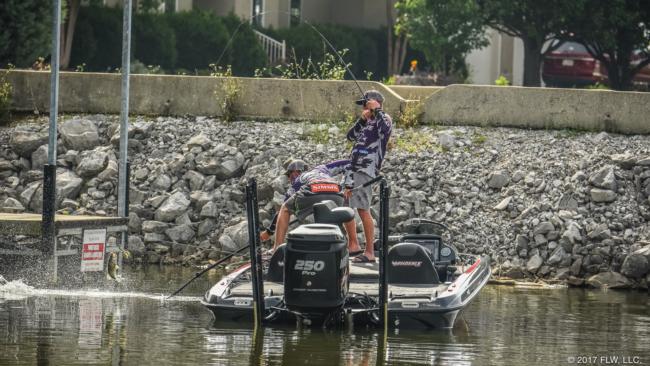 Alsop is no stranger to collegiate team tournaments. He and his former team partner from K-State, Taylor Bivins, won the Bassmaster College Series National Championship in 2016 on Green River Lake.

“One thing I’ve learned about tournaments is that it’s good to have options,” Alsop adds. “We have three different patterns going in three different areas. So I think we’ve got some good stuff to fall back on tomorrow if we need it.”

The top 10 teams fish in Friday's final round. Watch the weigh-in live at 3 p.m. CT at FLWFishing.com.