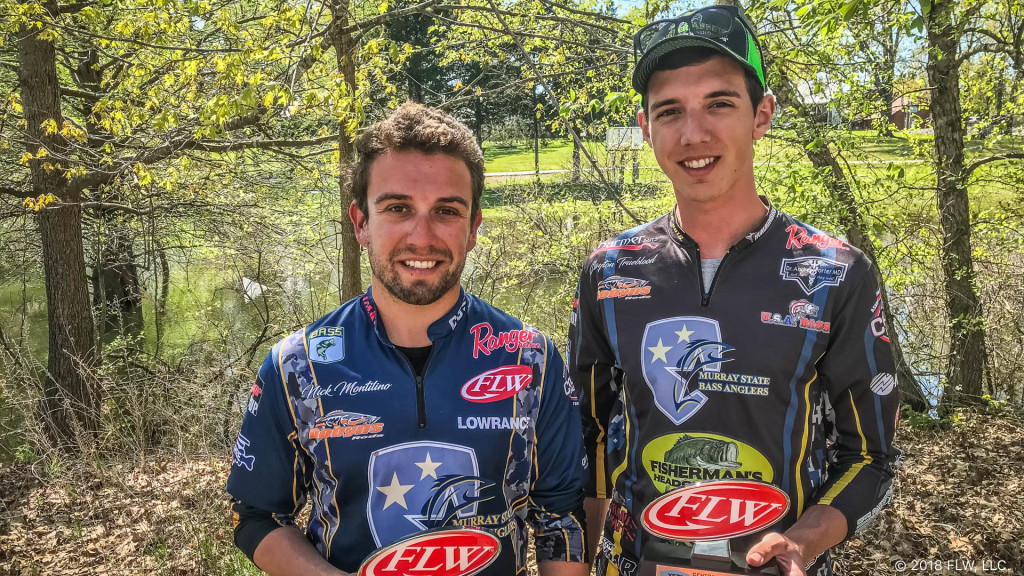 The Murray State University team of Clayton Trueblood of Petersburg, Illinois, and Nick Montilino of Edina, Minnesota, won the YETI FLW College Fishing event at Kentucky and Barkley Lakes presented by Berkley on Saturday with a five-bass limit weighing 21 pounds, 7 ounces. The victory earned the Racers bass club $2,000 and a spot in the 2019 FLW College Fishing National Championship.

“We had planned to spend the day fishing inside the Kentucky Dam Marina, but we made a last minute call to make a run and fish the north end of Lake Barkley,” says Trueblood, a sophomore majoring in agricultural business.

“We decided to go to Barkley for two reasons – one, there was another local tournament going on with around 250 boats, so there was quite a bit of pressure on Kentucky Lake,” says Montilino, a junior majoring in business administration. “The second reason is because the water was a little dirtier on Barkley. The water is very clear on Kentucky Lake right now and it is hard to get any bites flipping.”

The Murray State duo says that they targeted bushes in creek channels running into the main bays. They caught only six keepers throughout the day on Texas-rigged black and blue-colored Strike King Rage Bugs, pegged with 3/8-ounce weights.

“It happened fast – within the first hour and a half on the water,” says Trueblood. “We thought we had around 17 pounds and we assumed that we needed one more big bite to earn the win, but we were shocked when the scale read 21 pounds.”

“The key for us was fishing clean,” Montilino says. “We didn’t miss any fish and landed every one of our bites – that was huge with only six bites all day long.”

The top 10 teams on Kentucky Lake that advanced to the 2019 College Fishing National Championship: