The Red River is proving itself difficult for the college anglers 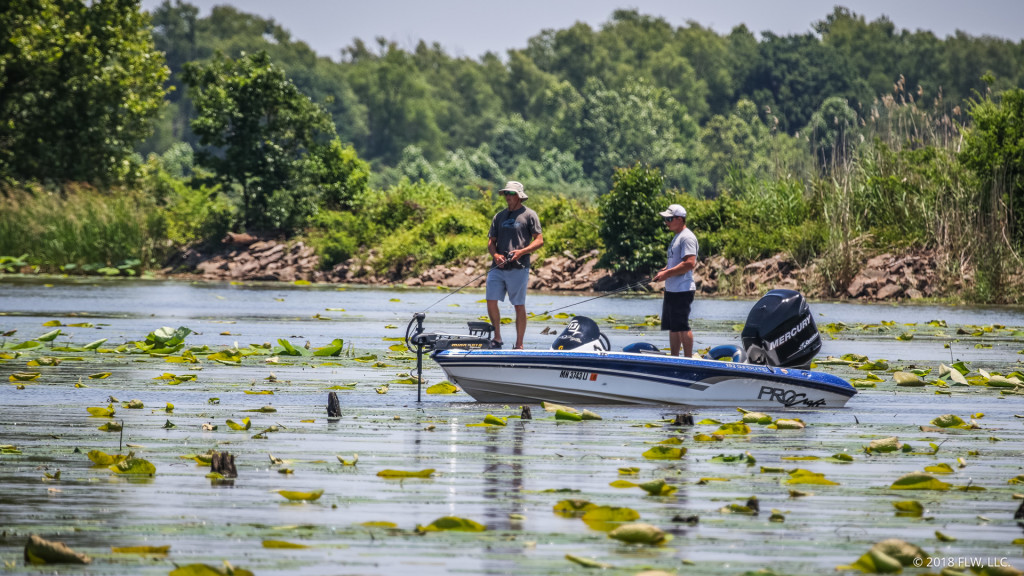 With the excruciating heat and slow bite, we’re going to close down the blog for the day. The first round of anglers are set to weigh-in this afternoon at 2:30 p.m. CT. A live weigh-in link will be posted on flwfishing.com shortly after 2 p.m. Keep in mind that many teams will be running through locks to make their way back to Red River South Marina so they will need to manage their time wisely.

Moraine Valley anglers John Neubauer and Andrew Jensen have four fish in the box – no word on size.

Murray State University’s Joe Bardill and Luke Ripple are working on No. 4 and No. 5 by flipping along rock banks.

Turner Truttschel and Colin Steck of the University of Wisconsin have managed to bring in two keepers thus far.

K-State’s Tyler Nekolny and Hunter Whiteley have themselves a small limit. All of their fish came on shaky heads from the popular oxbow.

One a side note, the temperature is up to 95 degrees in Shreveport. The perseverance of these college anglers is definitely being put to the test today.

Logan Smith and Payton Morgan of Kennesaw State have a 13+ pound limit, most of which came from early this morning. Shortly after pulling up on them, they culled up another quarter pound. It’s safe to say they are looking really good heading into today’s weigh-in. 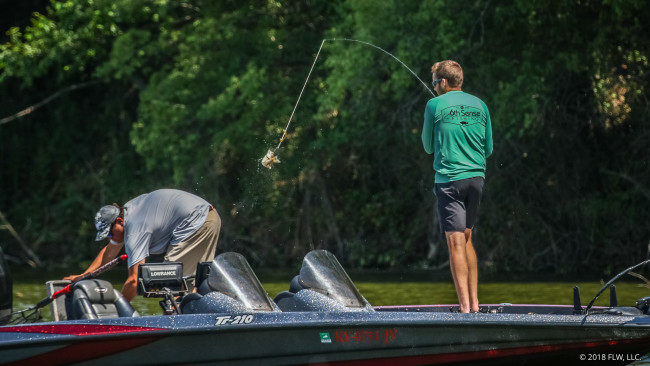 Numerous teams are bunched up in an oxbow just north of the Pool 5 Lock. Most of them are targeting the steep banks which are loaded with wood and vegetation. Along with the natural appeal of the oxbow we are seeing some bream on beds. Still, most teams are having a difficult time putting good fish in their livewells.

Elsewhere, Adrian College anglers Nocholas Czajka and Jack Hippe have made a few culls to break the 10-pound mark. It’s looking like any double-digit weights will be considered successful here on the Red River.

Peyton Porter of Murray State University just took a hook to the mouth. Him and his partner Nate Maxwell had to perform some quick on-the-water doctor maneuvers to get the hook free. They had a few first-aid materials in the boat so everything should be alright for the remainder of the day. 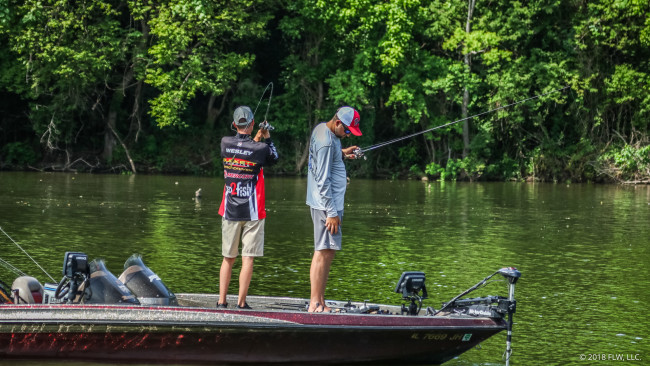 Dalton Wesley and Zach Hartnagel of SIU-Edwardsville have their limit! That makes them the second team we know of with five fish. When we pulled up on them they were working some timber with worms. They said they caught three fish throughout their entire practice.

Adrian College anglers Chase Serafin and Cody Batterson have brought in four keepers so far – a couple are pushing to be over two pounds.

Auburn's Cameron Mercer and Cole Burdeshaw have three fish in the boat.

University of Wisconsin-La Crosse's Eric Ulry and Colby Wolff only have one keeper, but it’s a 3 1/2-pounder. 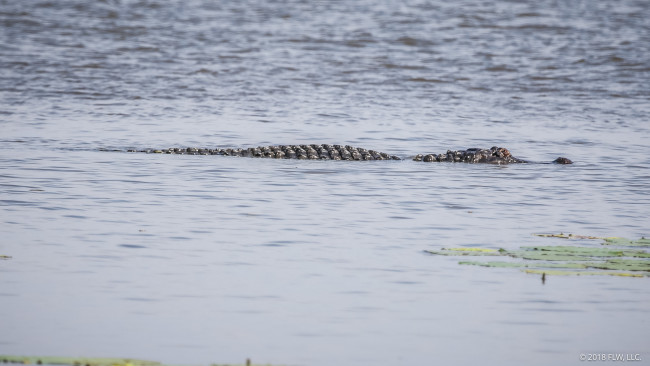 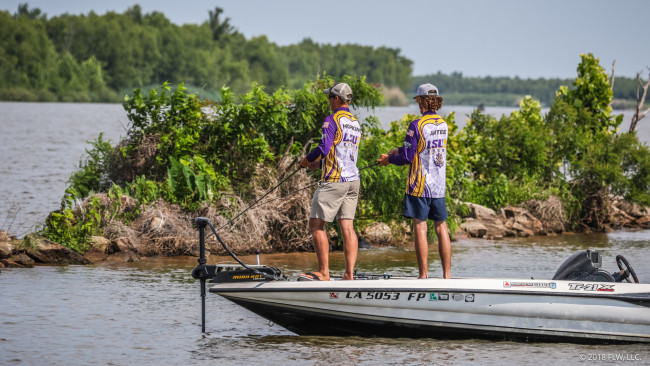 The sun is really starting to bring the heat here in Shreveport as the temperature climbs into the 90s. Unfortunately, the fishing isn’t heating up along with the weather. Most teams are still grinding it out with little to show. Adrian College is still the only team with a limit to report.

University of South Carolina’s Will Miller and Ethan Ingle are one fish away from a small limit.

Dillon Falardeau of UT Chattanooga recently boated a 2-pounder. When asked how the day is going he stated, “It’s painfully slow.”

The LSU-Shreveport duo of Harrison Hopkins and Ryan Antee have a pair of 2-pounders.

University of Georgia’s Collin Chandler and Garret Stone have two dinks in the box.

Max Gresham and Zachary Blake from Valdosta State are stuck on one small keeper.

UW-Stout anglers Gavin Hessler and Noah Lindus just lost a good one on a rock jetty. Finding reaction bites is their deal.

It seems like most teams have caught a few fish so far this morning. The only issue is most fish are on the small side. The dominant pattern so far is targeting rock and jetties. Yet, fish are being caught in all sorts of ways on the Red River.

University of Tennessee Chattanooga Patrik Hoskins and Dillon Falardeau have one little fish.

Gabriel Dubois and Brandon Heizer of the University of Missouri have two keepers. They are flipping shallow wood in an oxbow.

Liberty University’s Brian Travers and Caleb Unger have four fish for around five pounds. They have been cranking shallow rocks.

Texas A&M Texarkana angler Lane Kennedy has busted out the frog for four keepers, two of which are 2+ pounders.

Vincenzo Puleo and Austin Klotz of the University of Michigan Dearborn have a single keeper in the box. Rock jetties are what they seem to be targeting.

Cole Thomas and Via Thao of California State Long beach just landed their third keeper of the day.

Micheal Duarte and Matthew Iman of the Community College Baltimore County just missed a fish – no word on size.

The University of Nebraska team of Charlie Deshazer and Jackson Ebbers is one fish away from a limit. Their largest fish is pushing three pounds.

Herbie LeBlanc and Gregory Dooman of the University of California Merced had a slight equipment malfunction and are now left without a trolling motor. Other than that, they have caught three throwbacks – an unfortunate start for the Western Division team. 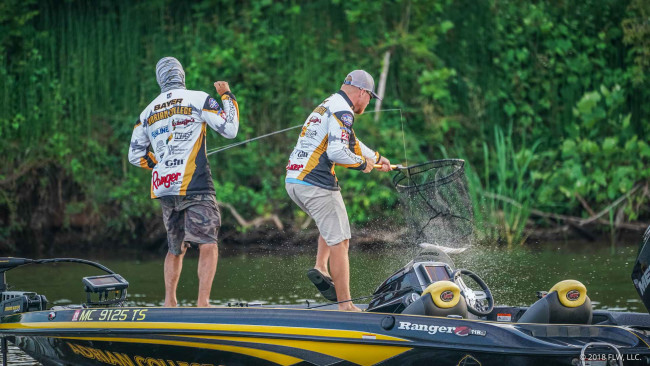 Adrian College's Jack Hippe just culled a dink for a 2+ pounder. According to Hippe, “Everyone one of these fish has a hole in it.” It will be interesting to see how the release-fish pattern plays out.

Elsewhere, we are finding many teams still focused on fishing rocky areas of the river. Specifically, cranking jetties and points along the main river.

Nicholas Czajka and Jack Hippe already have five fish in the boat. The duo has been targeting a wing dam with spinnerbaits and a Texas-rigged worm. It sounds like they can make a few upgrades as the day progresses. 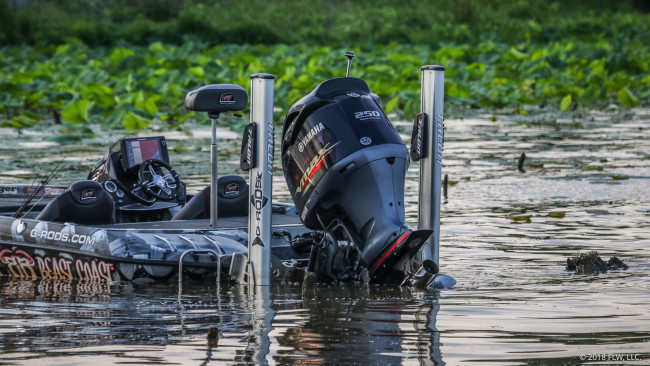 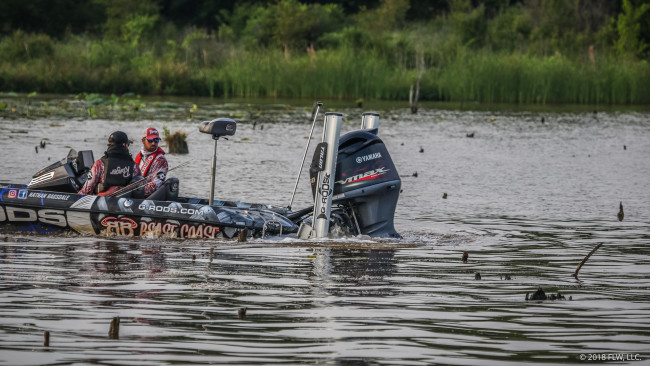 The University of Georgia team of Wesley Griner and Nathan Ragsdale are not off to an ideal start this morning. When we first caught up with them they were flipping and frogging some pads with no fish to show. Not long after, the duo found themselves stuck on a submerged stump. Luckily, they were able to safely free themselves and are now back to fishing. 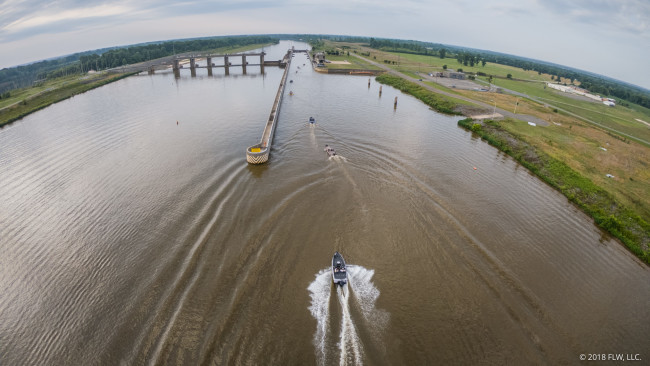 Pool 4 seems to be a desirable stretch of water this morning with numerous boats making the run down river. However, a handful of boats missed the first lock down to Pool 4. Right now, they are waiting for their next chance to make it through. 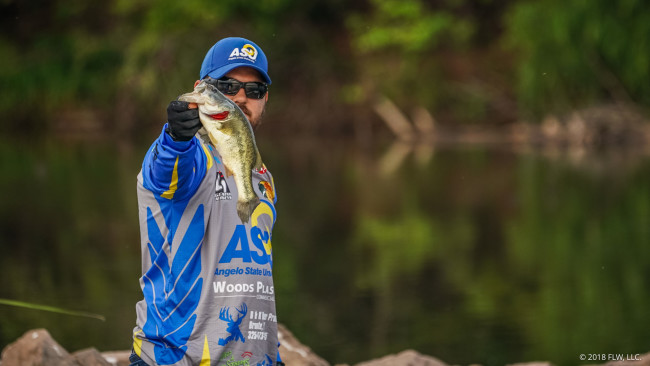 The Angelo State team of Nolan Osmanski and Nathan Ahle are off to a good start after catching a couple of two-pounders. They are well on their way to a solid Red River limit.

The teams that we’ve come across so far seem to be targeting riprap and seawall structure on the main-river channel. 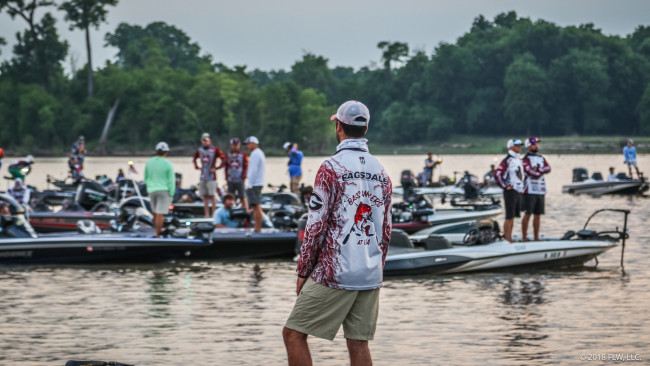 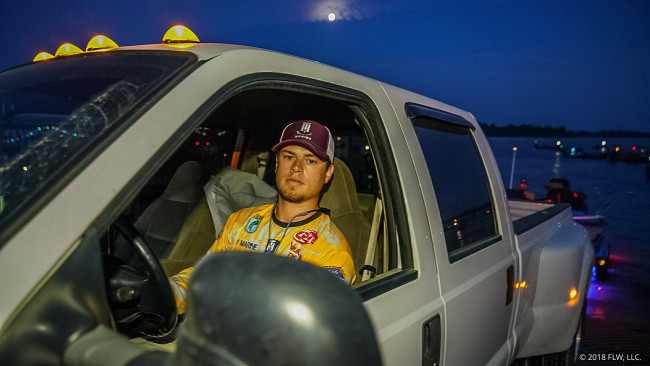 168 teams from all over the country have made the trip down to Shreveport, Louisiana to fish in the 2018 YETI FLW College Fishing National Championship presented by Lowrance C-Map Genesis.

Fishing the Red River in the past few years has been somewhat difficult due to flooding and a lack of vegetation. Not to anyone’s surprise, optimism from the practice reports have been extremely limited. However, with 168 of the best college fishing teams in the country on the water, expect someone to figure it out.

It was already warm at takeoff, and that’s only a taste of what is to come. Today the highs are in the mid-90s, and the sun is going to be unrelenting. The fish are from here, so they’re relatively used to it, but gutting it out through the heat is going to be a challenge for the anglers.