Top 10 Patterns from the Red River

What worked in the YETI FLW College Fishing National Championship 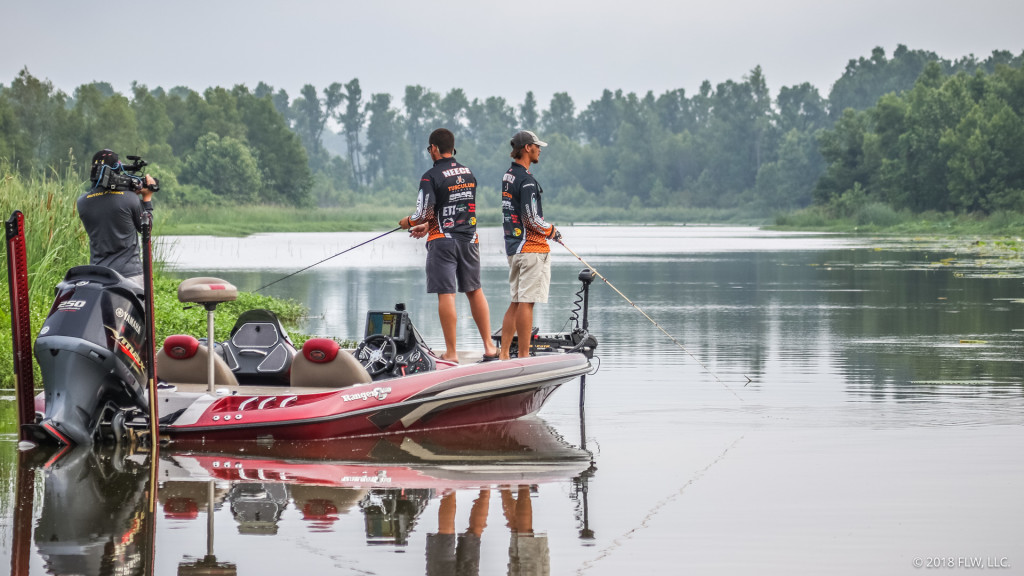 University of Louisiana-Monroe’s Thomas Soileau and Hunter Freeman concentrated on easily accessible backwater areas in Pool 4 to win the YETI FLW College Fishing National Championship presented by Lowrance C-Map Genesis on the Red River. Behind them, the rest of the top 10 caught fish a variety of ways – camping in smaller backwaters, fishing the main river, or mixing it up. The Red was certainly tough, but most teams managed a limit every day. That said, getting a kicker bite or two was a huge challenge. 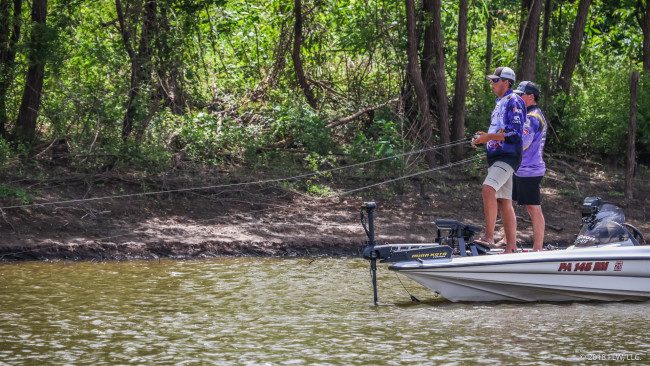 With their second-place finish, Bethel University’s Cody Huff and Garrett Enders continued their upward movement, which started with a 32nd-place catch of 8-8 on day one, followed by day two’s biggest catch – 13-14 – and a big move up to third. In the final round, they added 12-12 and finished with 35-2.

Huff and Enders fished primarily in one backwater in Pool 4 and had to wait for their pattern to develop each day.

“We had a really slow start; we didn’t catch our first keeper until an hour and a half into it,” Huff says. “As soon as that sun got up, those fish really sucked to the bank and got in those shade lines and we caught them pretty quick.”

Huff says he and Enders were targeting the shade of overhanding willow trees, as well as the subsurface root structures. They caught their fish on a 1/2-ounce white Twin Tackle Swim Jig with a white Zoom Ultra Vibe Speed Craw trailer and a Z-Man Custom ChatterBait.

“There were a lot of bluegill around those trees, but also a lot of bait relating to that cover,” Huff says. “The swim jig was better earlier in the week, but today, they seemed to eat the ChatterBait better.”

Enders says that early ChatterBait bites steered them toward the bait for the rest of the final day.

“The boat was sitting in 5-6 feet and that’s why we think they were on that bank. It was like a foot and a half, but some parts of the bank are undercut and the willow roots would come out. We think some of those big ones would get up under those roots, so the key was to get our ChatterBaits as close to the bank as we could.” 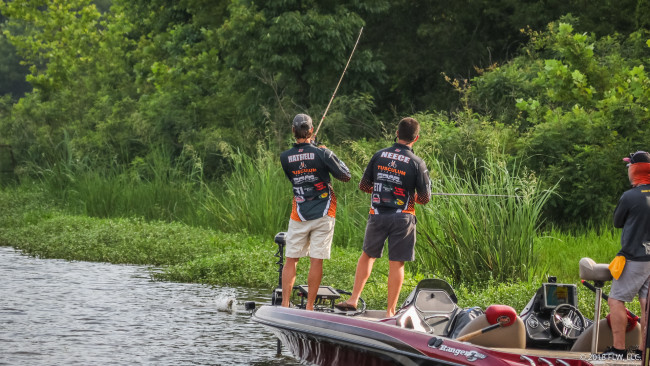 For the first two days, Tusculum College’s Nick Hatfield and Corey Neece kept themselves near the top of the standings before finishing third with 34-5. Day one saw the anglers catch a limit of 12-1 and place fourth. They’d follow up a day later with 13-9 and move up to second. In the final round, they finished out by adding 8-11.

A key backwater area in Pool 4 with abundant vegetation held Hatfield and Neece’s attention for most of the tournament. Punching a beaver style bait with a 1 1/2-ounce weights and working the surface with a popping frog and a buzzbait yielded all of their bites.

“We found this little backwater area that had clean water and alligator grass,” Hatfield says. “There was a healthy population of fish. Day one and day two we caught them good. Today, we went in there and we caught one good one right off the bat, but then I think it showed us we had depleted the area; we had run out of fish.”

Neece says his team’s strategy was to get away from the crowds and fish in solitude.

“Those fish live in the grass, so you have to get up close to catch them,” Neece says. 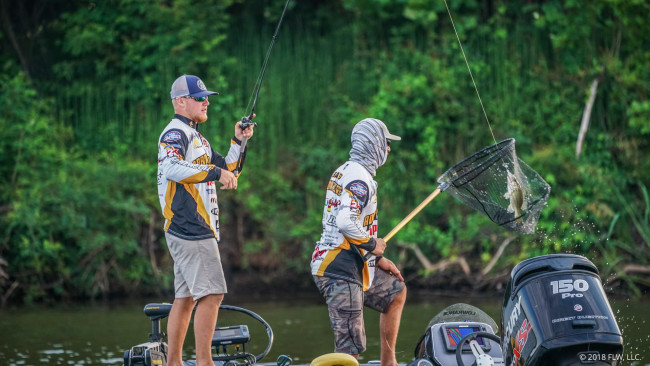 With far fewer tournament boats on the water on the final day, Adrian College’s Jack Hippe and Nick Czajka took advantage of the opportunity to run and gun. Adding 8-12 to their first two scores of 10-3 and 11-15, they ended up in fourth place with 30-14.

“We didn’t have a limit today until about 1 o’clock and then we made three or four culls afterward. Our adjustments worked, to an extent. We didn’t get nearly as big a bag, but I think we’re both happy with it.”

Czajka says he and Hippe caught their fish on black Zoom Magnum Trick Worm. Downsizing from a 5/16-ounce weight to a 3/16-ounce allowed them to make more effective presentations.

“In the areas we were casting to, you either got bit or you got hung, but that’s where the fish were,” Czajka says. “If you threw it out there and if you moved it too much, you were getting hung in the rocks. You had to let the current do its thing and just drag it along really slowly. It was painfully slow.”

Late on day three, Hippe culled a fish with a 1/4-ounce white Terminator spinnerbait with white blades and a white Bass Pro Shops Speed Shad trailer. Earlier in the week, the pair dragged a tube as well. 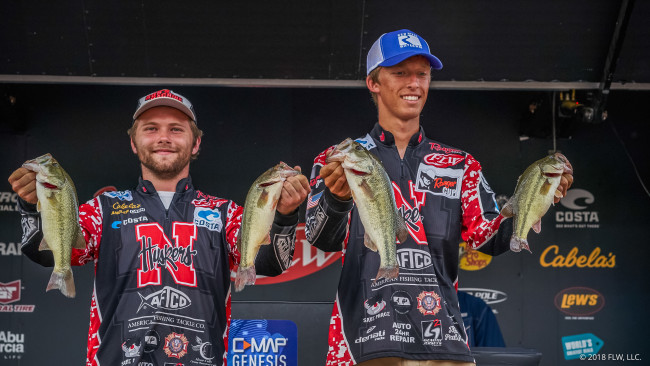 Day one saddled Charlie Deshazer and Jackson Ebbers with crippling boat issues, but the University of Nebraska anglers fought through the impediments and got their equipment back in full form for days two and three. That first day actually delivered their best weight — a limit of 13-11 that put them in second place. Adding 8-9 on day two and 8-5 on day three gave them a fifth-place total of 30-9.

“As the week went on, the big fish were being caught or they were being pressured, so we couldn’t catch a big one after day one,” Deshazer says. “We caught them on a spinnerbait and a squarebill crankbait. The crankbait excelled in the morning when they were up shallow and we threw the spinnerbait out deeper for big ones.”

Ebbers says boat positioning was key for the squarebill presentations. Sitting nearly on top of the rocks allowed them to get a light crankbait down into the strike zone. 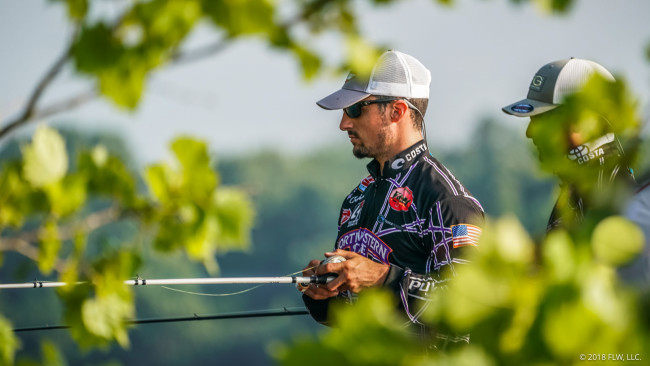 Shallow, muddy water intimidates some, but not Robert Jones and Hunter Malmay, who worked shoreline wood cover and earned a sixth-place finish for Northwestern State. Weights of 11-14 and 12-5 kept them in fifth place for days one and two, until a slower day three brought only a limit of 6 pounds for a tournament total of 28-3.

“The muddy water played to our strengths,” Jones says. “We’re pitching and flipping guys; that’s what we love to do. We did that on day one and got some bites and that was basically our practice day because we didn’t practice for this tournament.”

Malmay says they noticed lots of crawfish and baitfish around the shallow cover so they “beat it to death” with a black and blue V&M J Bug. Sending baits deep into cover allowed the Northwestern anglers to reach fish others likely bypassed.

“We lost a good one doing that on day three, but you can’t be afraid to go after them,” Malmay says. 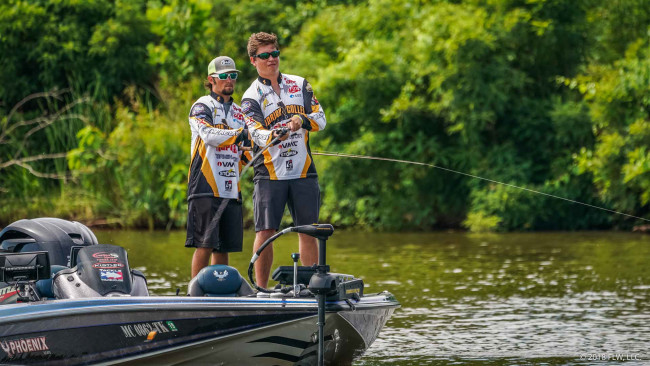 The Adrian College team of Chase Serafin and Cody Batterson – winners of this year’s YETI FLW College Fishing Open on Kentucky Lake – placed 13th on day one with 10-6, moved into ninth on day two with 8-4 and ended in 7th after they added 8-10 for a 27-4 total. Making their first visit to the Red River, the Adrian College duo opted to grind it out on the heavily pressured main river rocks; a strategy that relied on current.

“We were on some good fish in practice, but as the tournament came, more and more guys started moving out to the main river as they realized the sloughs and backwaters weren’t as good as they were hoping,” Batterson says. “Everyone pushed out onto the main river. The first two tournament days we had a boat on just about every one of our spots.

“We would run down the river and look for one of our spots that was open, we’d catch fish and go on to the next one. The final day was a little better; we shared spots with maybe one or two other teams.”

Batterson notes that less fishing pressure allowed them the morning bite they had previously been denied. Serafin says he and his teammate caught most of their fish on a Ike’s rasta-colored Rapala DT 6. They also caught fish on a mud bug-colored  Luhr-Jensen Speed Trap.

“We mostly targeted wing dams with current coming over them,” Serafin says. “One day we followed a barge to three different spots. As the barge came through, the water pulled over the spot and it pulled the bait over and we’d catch a couple of fish. We’d run down to the next spot and wait for the barge to come through.” 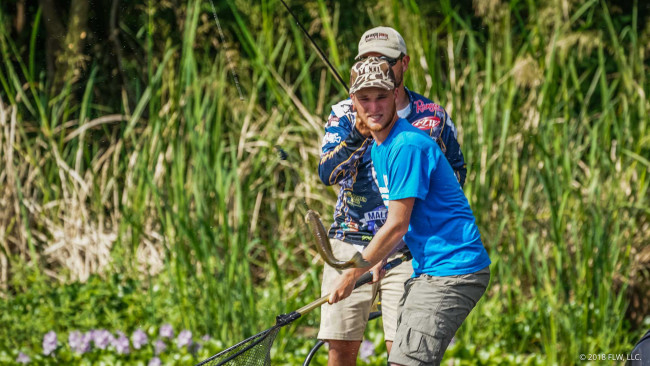 “We were fishing shallow cover in backwater areas,” Montilino says. “The key to that was finding areas with access to deep water. We caught a few on the main river, but deeper backwaters are what we were focusing on.

“We were fishing the bank, but the key was staying near a deep hole somewhere in the backwater.”

Spencer says wood and hyacinth mats were the key targets in the backwaters. 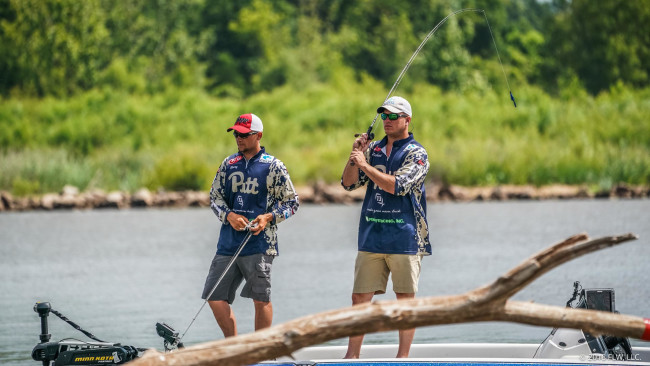 Adjusting to a changing bite led the University of Pittsburgh’s Michael Dunn and Henry Colberg to a top 10 finish. They placed 12th on day one with 10-8, moved up to eighth on day two with 8-2 and added 7-10 in the final round to end up ninth with 26-4.

“Day one was good, day two we had to change it up a little bit and day three we didn’t catch a fish until 12:30,” Dunn says.

“We cranked rock with a squarebill day on one and day two and on day three, we cranked rock almost all day,” he says. “In the last hour, we switched to a shaky head and picked up five.”

According to Dunn, the extensive pressure in Pool 5 eventually took its toll on their cranking bite. Switching to 1/4-ounce shaky heads with Z-Man Finesse WormZ coaxed the tough bites. Colberg says multiple casts to the same spots on current-washed jetties was essential to getting bit. 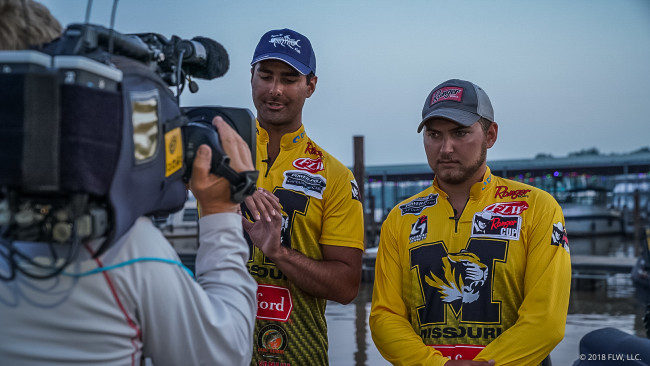 For the University of Missouri’s Gabriel Dubois and Brandon Heizer, making the top 10 was like starting all over. Days one and two saw them fishing an oxbow, which produced limit catches of 10-2 and 8-7 for 17th and 16th places. Day three yielded only three bass for 6-10 for a tenth-place finish with 25-3.

“We clawed our way here,” Dubois says. “We only got five keeper bites yesterday and when we made it to the day three, Brandon and I looked at one another and said ‘What do we do now?’”

“We finally found some water that produced for us. We just kept grinding and grinding and we finally got the ones that we weighed in in the last 30 minutes. We had to leave our spot at 12:45 to make the lock. At 12:25 I caught our first keeper, at 12:30 I caught our second keeper and at 12:35, Brandon caught our biggest one and that was our day.”

Dubois says he and Heizer caught all of their fish on 7-inch junebug-colored ribbon tail worms.

“We felt like kids again, fishing in the pond, but it got us here,” he says.