Crankbaits were the deal on Kentucky Lake 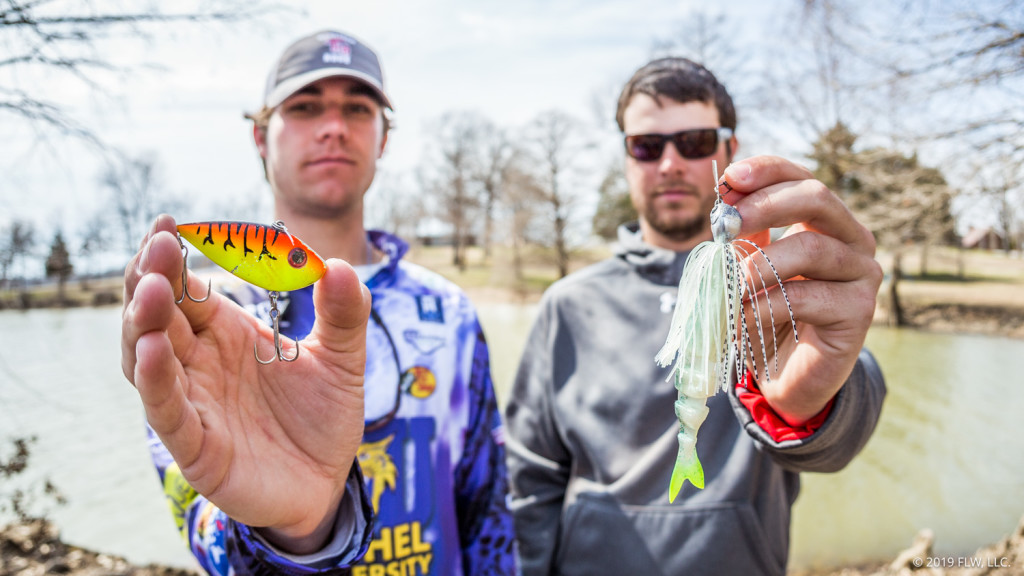 Crankbaits were the deal on Kentucky Lake during the 2019 YETI FLW College Fishing Open. Springtime on the Tennessee River impoundment usually means traditional prespawn tactics, and we saw a bunch of that during the tournament. Anglers in the top 10 relied heavily on lipless and diving crankbaits, as well as some Alabama rigs, jigs and jerkbaits.

Here are the details. 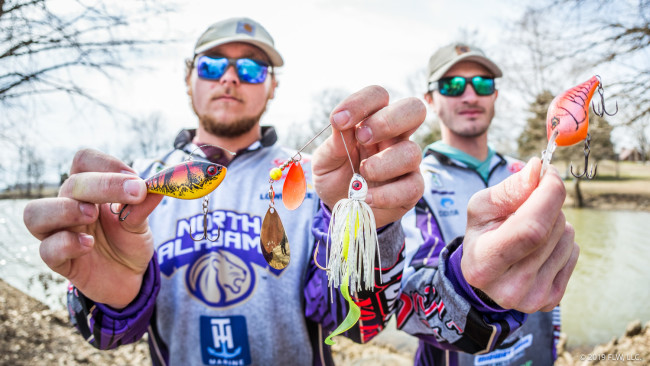 1. Hunter McCarty and Sloan Pennington of the University of North Alabama only used a few baits to get the job done: a red 1/2-ounce Jackall TN 60 lipless crankbait and a Rapala DT6 in the demon color. They also caught one fish on a custom 3/4-ounce double-Colorado blade (with one orange blade) spinnerbait and a Kalin’s Lunker Grub trailer. 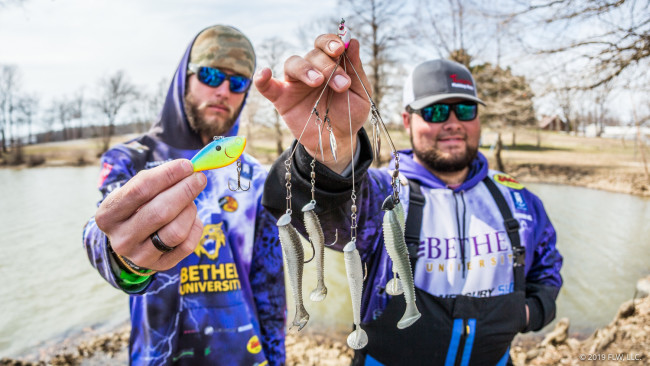 2. Dakota Pierce and Tristan McCormick of Bethel University caught most of their day-one fish on YUM YUMbrella Flash Mob Jr. umbrella rigs with 3.8-inch Keitech Swing Impact FAT swimbaits. On day two, they made the switch to a black and blue Queen Tackle jig and a 1/2-ounce Strike King Red Eye Shad to do most of their damage. 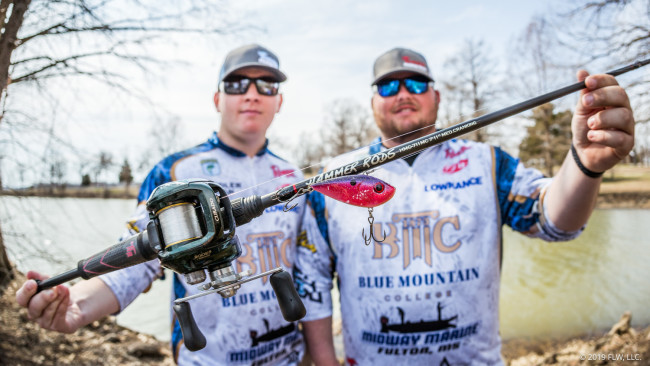 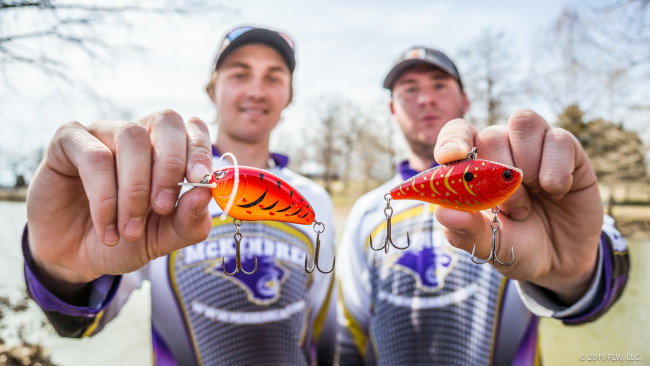 4. Nathan Doty and Jacob Louis of McKendree University did all their damage cranking. They employed a SPRO Little John 50 crankbait in a red craw color, but they caught most of their fish with a 1/2-ounce BOOYAH One Knocker lipless crankbait in the Rayburn red color. 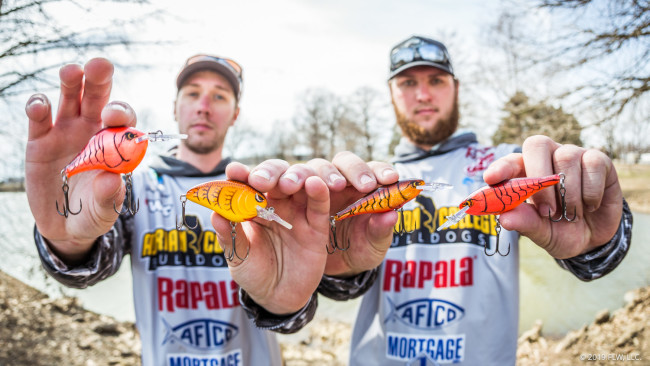 5. Alex Henderson and Zach Manneback of Adrian College spent all their time cranking and caught most of their fish on a No. 8 Rapala Shad Rap in Ike’s demon and crawdad colors. They stuck with those colors with Rapala DT6 and SPRO Little John MD crankbaits as well, though they didn’t catch as many fish on those baits. 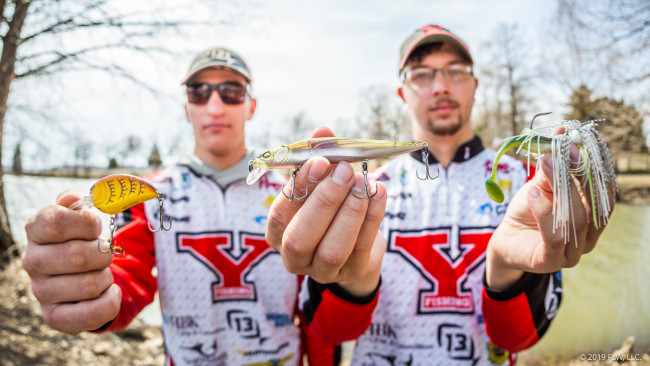 6. Youngstown State's Jonathan Creed and Jared Latone narrowed down their bait selection to just a few and “cycled through them” throughout the event. They relied primarily on a Megabass Ito Vision 110 jerkbait in the Wakasagi color, an Omega Custom Tackle Rapture vibrating jig and a SPRO Little John MD  crankbait in spring craw. 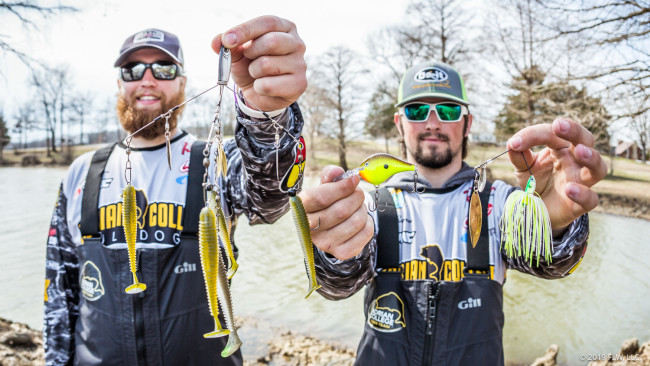 7. Zachary Graham and Cody Batterson of Adrian relied on a trio of baits to land their 37-14 for the event: a Rapala DT10, a white and chartreuse Terminator Super Stainless spinnerbait without a trailer and an Alabama rig equipped with either Keitech Swing Impact FATs or Bass Pro Shops Speed Shad swimbaits. 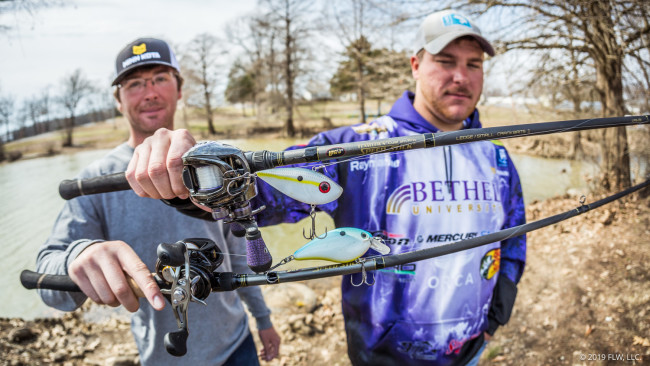 8. Bethel's John Coble Garrett and Kyle Palmer caught about half their fish on a Strike King HC 2.5 square-bill crankbait in either sexy shad or citrus shad and the other half on a 3/4-ounce Strike King Red Eye Shad in the sexy shad color. 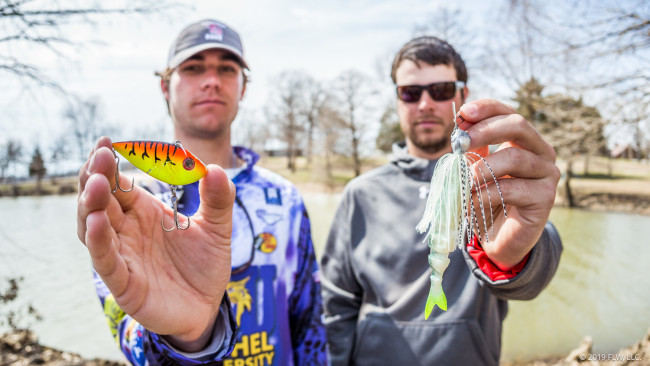 9. Cole Floyd and Carter McNeil of Bethel caught most of their fish during the event on a Strike King Red Eye Shad in the chartreuse belly craw color. They also used a white 3/4-ounce Z-Man/Evergreen ChatterBait Jack Hammer with a Lake Fork Live Magic Shad trailer. 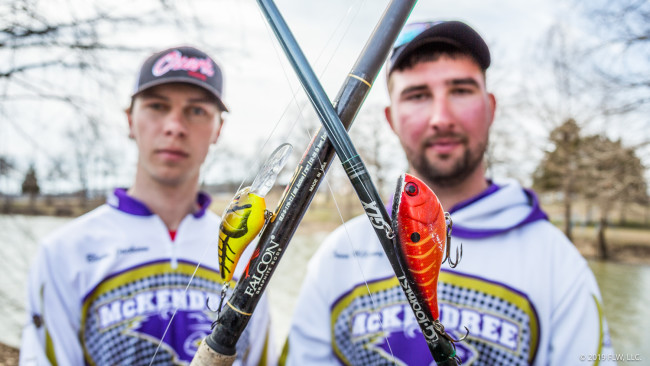 10. Trevor McKinney and Blake Jackson of McKendree relied primarily on two baits throughout the event: a SPRO RkCrawler 55 in spring craw and 3/4-ounce lipless crankbaits.