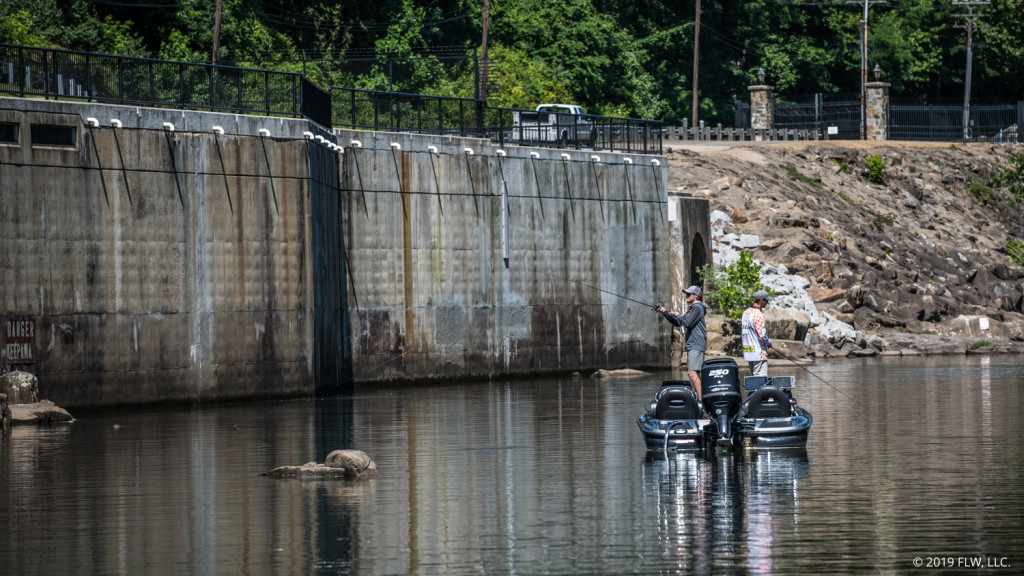 Day one of the YETI FLW College Fishing National Championship presented by Lowrance at the Potomac River was headlined by really good fishing. The combined efforts of 148 college teams netted 10 bags of more than 16 pounds and 86 total limits – a decent contrast to the recent T-H Marine Bass Fishing League (BFL) All-American. Leading the way, Nolan Minor and Thomas Raines of West Virginia University sacked up 18-5 to edge ahead of Jarrett Martin and Nickolas Marsh of Adrian, who comprise one of three times that landed in the 17-pound range after day one.

Though the fishing seems markedly better than it was just a few days ago, the techniques getting it done are just as mixed as before. Unlike some years on the Potomac, slightly underdeveloped grass beds have the river fishing in a pretty diverse way. If all you want to do is fish grass, that isn’t ideal, but it has made for a lot of opportunity elsewhere. 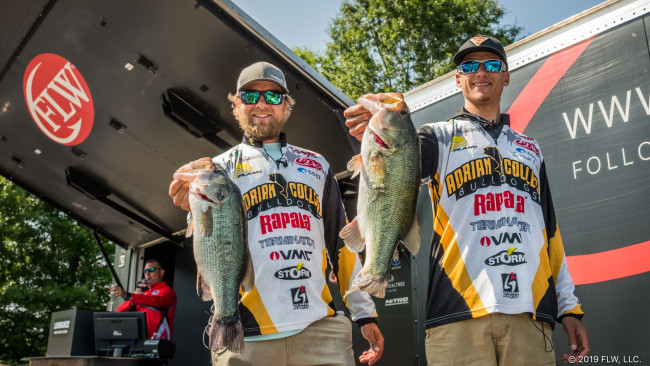 Mixing things up and seemingly running quite a bit of water, the Adrian duo of Jarrett Martin and Nickolas Marsh made hay in the afternoon as the tide was falling.

“We got ’em later in the day. This morning was definitely a little bit slower,” says Marsh. “Yesterday’s high winds kinda changed some of our water and positioned our fish a little differently, but the tide was still in our favor. But, it took us a little while. We only had two fish until about 11 o’clock.”

In the afternoon, the pair culled a few times and put together a really quality day. Though the team started in the grass, Marsh says he and Martin ran a hard-cover pattern for most of the day.

“I think the bottom composition is one of the biggest deals right now,” says Marsh of their pattern. “There’s a lot of the same structure through this entire system, but the key of our areas is the bottom. Ours is just a little different than the rest of it. I think that’s helping with the bigger fish. That, and there’s bait in our area.”

Eschewing the all-too-common Potomac practice of meandering over one grass flat for the entire day, Marsh and Martin stayed on the move.

“We’ve got quite a few areas. We basically have a good milk run up and down,” says Marsh. “It’s a run-and-gun tactic. We’re on the trolling motor for five minutes, and then we pull it and run for 10 minutes and do it again.”

As a school, Adrian has crushed it in recent years, but it hasn’t managed to win the YETI FLW College Fishing National Championship. Though this is the only Adrian team in the top 30 in this one, Marsh and Martin definitely have a chance to get the job done. 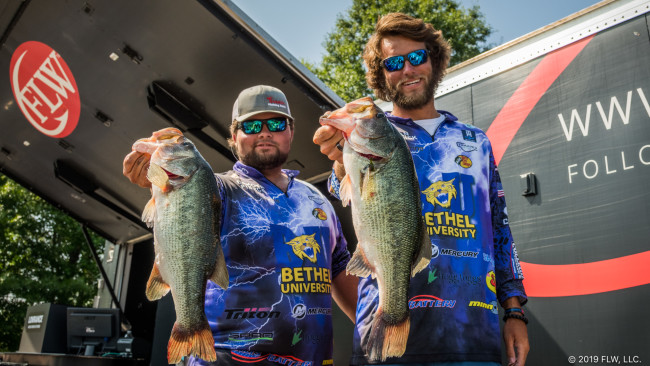 Fishing grass like you’re supposed to on the Potomac, Tristan McCormick and Dakota Pierce caught a pile of fish and mixed in some unexpected size to break 17 pounds.

“We caught quite a few fish in practice, and we just went down the same stuff and got a lot more bites and bigger bites,” says Pierce of the team’s first day. “We’re sticking our boat in about 3 feet of water and going around throwing a ChatterBait all day. Nothin’ fancy.”

When asked if they could do it again, Pierce was ready to go try.

“It could happen again,” he says, “or we could catch 2-pounders like a bunch of these boys.” 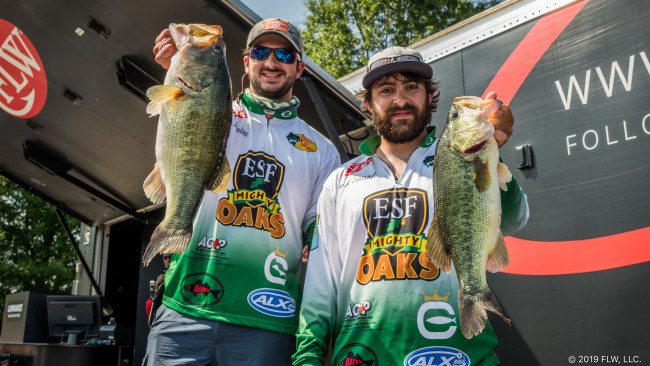 Patrick Durand and Benjamin Schultes had a decent day going until the final hour. Then it got really good. They culled out a 12-pound limit from one spot at the end of the day to get up to 17 pounds.

Hailing from Cherry Hill, N.J., Durand is relishing the chance to compete for a championship on a tidal fishery.

“Today we were just rolling with the tide, running and gunning,” he says. “I grew up in tidal water. I’ve been fishing tidal water all my life, and we found eight or 10 spots and were just running them when the tide was right.”

Fishing both moving baits and finesse baits, the pair caught about 25 fish on the day, though a number were definitely short of the mark. Though the low tide was key for their best spot today, Durand seems very interested to give it a shot in the morning with a high tide. 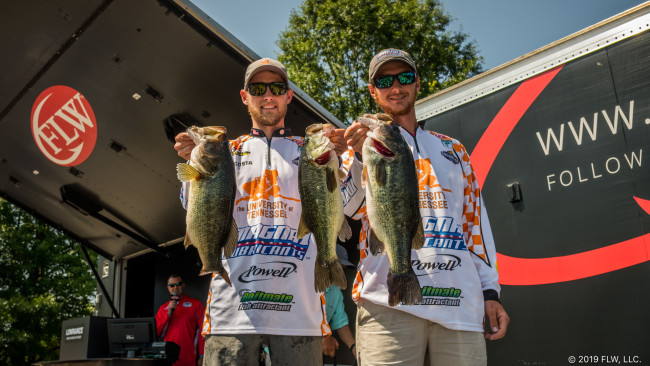 Mining just one spot is a dangerous game to play, but it starts looking really good when everything else goes right too. For Jordan Burdette and Saxton Long, day one was a really good day.

“I lost a 3-pounder on a swim jig first thing, and then a 4-pounder chased it out and sat right next to the boat for like an hour,” says Burdette. “I would just flip on her every now and again, and then I changed lures and flipped on her under the boat. I could see her, and she bit, and that was one of the ones we weighed in.

Starting away from everyone else worked great, and the Volunteer team kept things clicking from there. After a move to a few other predetermined spots it culled a couple smaller fish, and then ran out of stuff to hit and went practicing, only to cull two more times.

“It was a fun day,” says Burdette. “Everybody’s been talking about how tough it is, and I’ve had an absolute ball.” 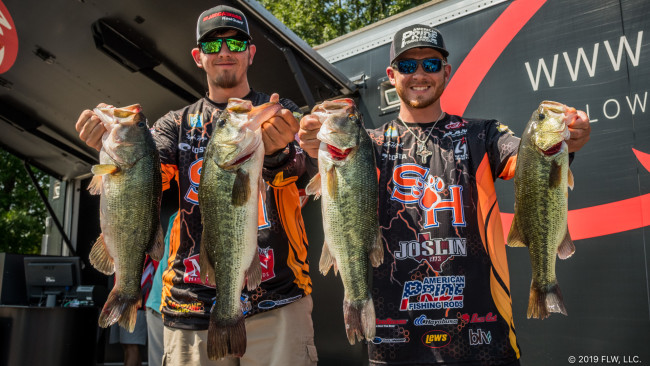 Tied by weight with Tennessee, Dillon Harrell and Taylor Harp headed to the back of a creek for their fish.

“We’re fishing hard cover, bends, but not big bends – just places where there’s some current on it,” says Harp. “We had our limit in one creek and upgraded a few times, and then went to another creek to save some fish, and we were able to get another upgrade.”

Kip Carter did very well in the All-American fishing the backs of creeks, and Brennon McCord won it partially in the back of a creek. So, Harrell and Harp seem to be in good company so far.