Puckett and Albertson take over first place with 18-plus bag

Thanks to a day-two limit worth 18 pounds, 14 ounces, Adam Puckett and Blake Albertson of Murray State University have the lead going into the final round of the YETI FLW College Fishing National Championship presented by Lowrance at the Potomac River. The Racers weighed 16-13 on day one to place seventh, but moved up the leaderboard today with the tournament’s biggest limit so far.

Doing an admirable job of keeping up the pace from day one, Puckett (a junior agriscience technology major) and Albertson (a junior business administration major) have done just about all of their damage in one area, just fishing it differently depending on the tide.

“We started out in our spot, where we had been starting out real shallow on high tide,” says Puckett, “but we stayed out and started fishing the grass and caught three keepers within about 20 minutes. One was about 4 pounds.”

After a hot start, the team made a short move and limited out. The Racers stayed rolling from there.

“It was one of those days where nothing went wrong,” says Puckett. “I flipped into this tree and caught a 3-pounder, and while I was culling Blake caught a 5. Not even two casts later I cast out in the grass, got a backlash and picked it out, and a 4-pounder had it when I started reeling.”

After leaving their primary area, they culled yet again to get to their final weight. 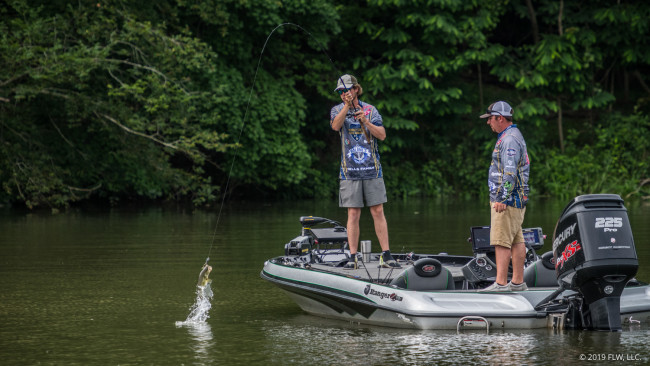 The area Puckett and Albertson are fishing is essentially a very flat creek with grass, and they’re catching some on wood and some in the grass.

“We only weighed two on the ChatterBait yesterday, but today pretty much every one of them come on a ChatterBait in the grass,” says Puckett. “We caught a quick limit flipping, but none of them were over 2 1/2 pounds.”

If their area can reload again, they might be able to close out the win. Though Albertson has a T-H Marine Bass Fishing League (BFL) win as a boater, the two only have one other top 10 in FLW competition, so a win in the National Championship would be pretty huge.

“I’m excited about that spot,” says Puckett. “We didn’t know how well it would reload, because at low tide you can’t even get a bite in there, so they have to come out. I’m hoping tomorrow it reloads again.

“We’ve got one stretch where every big one has been; about a 50-yard stretch. We’re definitely going to soak that tomorrow.”