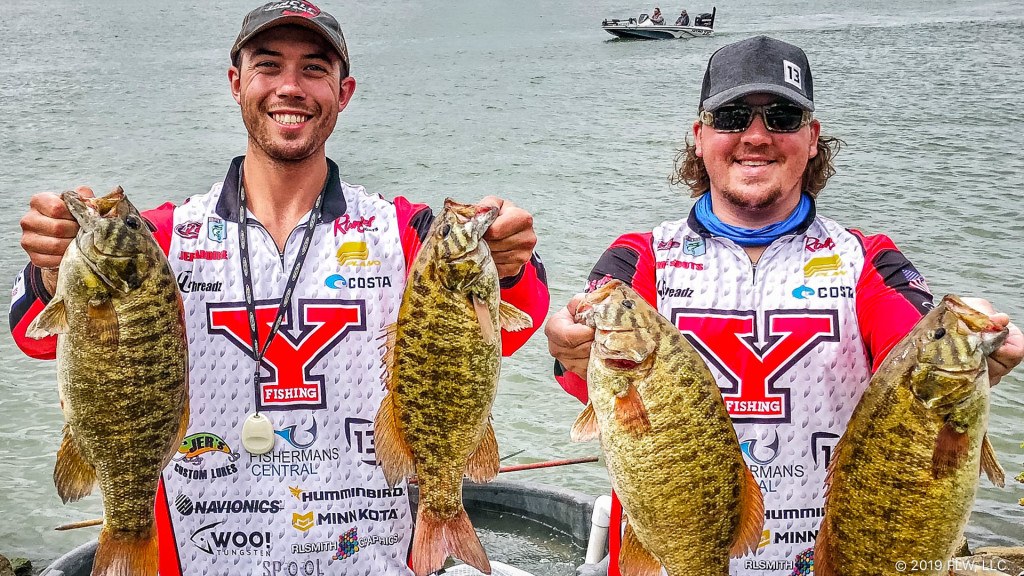 The Youngstown State University duo of Jeffrey Jardine of Niles, Ohio, and Mike Soots of McDonald, Ohio, won the YETI FLW College Fishing event on Lake Erie with a five-bass limit weighing 22 pounds even. The victory earned the Penguins’ bass club $2,000 and a slot in the 2020 FLW College Fishing National Championship.

“It was a pretty slow morning – we only had two smallmouth bass in the livewell by noon,” says Soots, a senior majoring in criminal justice. “Around 12:15, with two hours left in the day, we made a move back to a shoal that we had fished that morning – near Kelly Island – and it was on. I reeled in a 5-pound smallmouth and as I was unhooking it, Jeff got into a 4½-pounder. We caught three good ones within 20 minutes.”

“We had talked about scrapping the shoals and moving back into Sandusky Bay, but we made the decision to have patience and just grind it out on the shoals – we knew we were going to hero or zero – and I am so glad we stuck with it,” adds Jardine, a senior majoring in business administration.

The duo fished two main baits to catch the majority of their fish – Soots a Ned Rig and Jardine a drop-shot rig. Soots’ Ned rig setup was a New Money-colored Z-Man TRD, while Jardine used a green-pumpkin-sky-colored Verbinator Baits Little Donkey stickbait on his drop-shot.

“Mike and I work really well together as a team, and I think that is crucial to do well in these events,” Jardine went on to say. “We had so many problems that we had to overcome – our front graph stopped working, our trolling motor wasn’t working great, and I was hobbling around with a broken foot. It’s nice to have a teammate that works with me and I am comfortable with.”