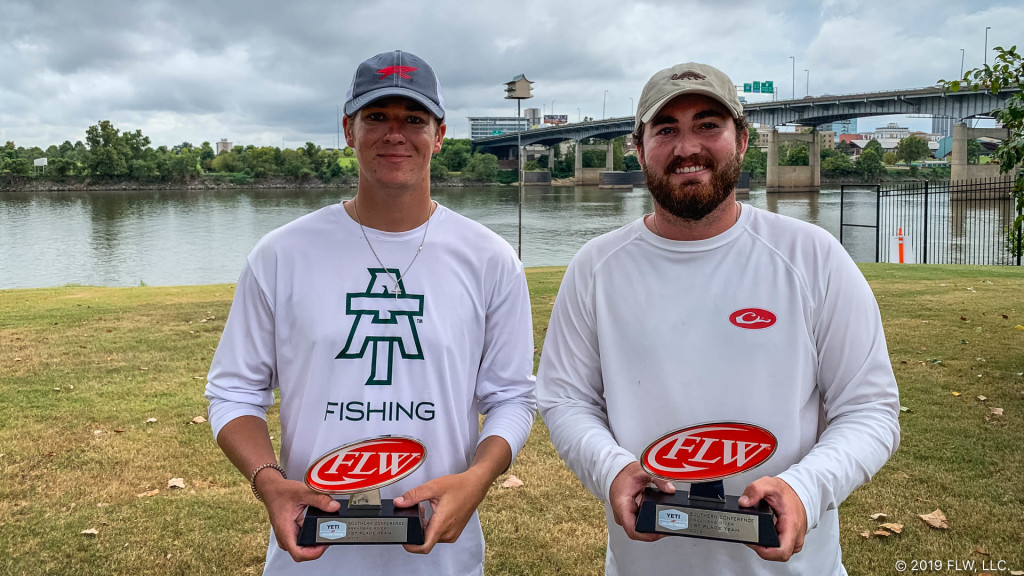 The Arkansas Tech University duo of Fletcher Nutt and Dustin Reid, both of Sheridan, Arkansas, won the YETI FLW College Fishing event on the Arkansas River presented by Bass Pro Shops with a five-bass limit weighing 15 pounds, 2 ounces. The victory earned the Wonder Boys’ bass club $2,000 and a slot in the 2020 FLW College Fishing National Championship.

“We live about 30 minutes from Little Rock, so the river is pretty much our home water,” says Reid, a senior majoring in agricultural business. “It turned out to be a big advantage.”

“We locked down from Little Rock to the Tar Camp pool,” says Nutt, a sophomore majoring in natural resource management. “We had two good days of practice coming into this event and had found some fish in the backwaters.”

The duo mainly caught their fish on a trio of baits – a Carolina rig, a crankbait and a Zoom Z Craw on a shaky head – although they also added a nice keeper near the end of the day on a River2Sea Whopper Plopper.

“We probably caught around 30 fish,” Reid says. “Most came on the shaky-head worm, but we caught one good one on a crankbait and a nice 4½-pounder on the Whopper Plopper.”

“I think the key was our local knowledge,” Nutt adds. “We were fishing a little bit deeper than everybody else was, and some of the areas we were fishing were very tough to find in practice.”