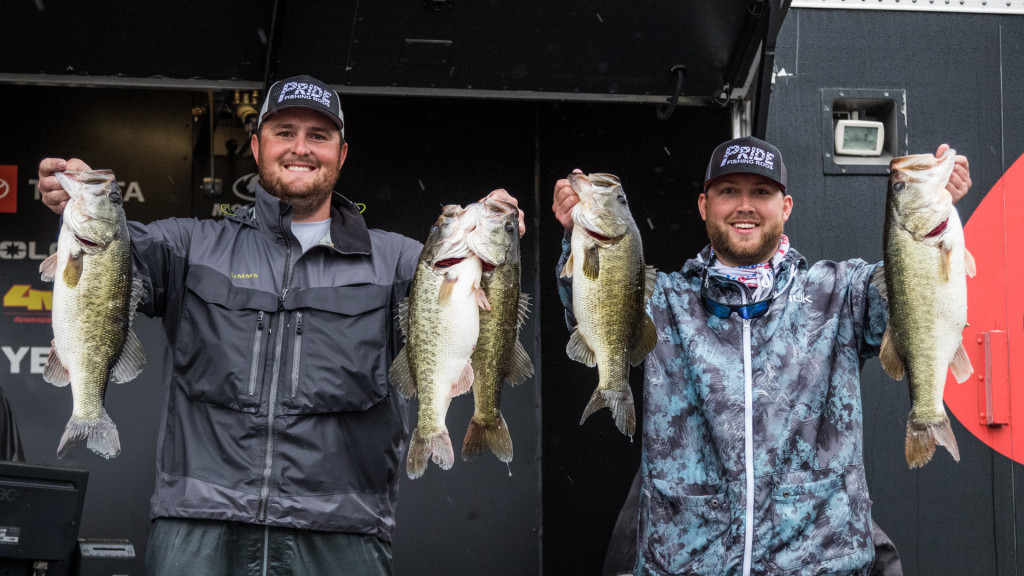 Day one of the Abu Garcia College Fishing presented by YETI National Championship presented by Lowrance on the Harris Chain certainly didn’t disappoint. The consensus from many of the teams during practice was that the chain was fishing tough, yet would kick up some solid bags on Tuesday. With 10 bags over 18 pounds and six over 20, it’s safe to say the Harris Chain is living up to it’s potential.

Leading the charge with 24-11 is the Sam Houston State duo of Bryton Kurtz and Jackson Carrell. While the team is obviously pumped to kick the championship off with a solid bag, it also came as nice birthday gift to Kurtz. 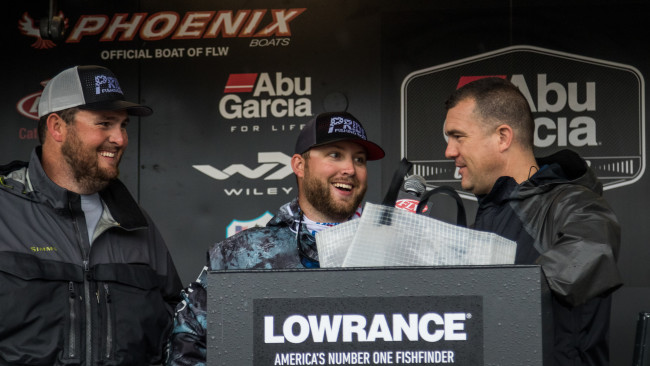 “I made a joke with [Kurtz] this morning that wouldn’t it be something if we caught 24 (pounds) on your 24th (birthday),” Carrell says.

Though the Texas school team has never been to Florida, it didn’t take much adjusting to get used to the Sunshine State.

“We caught one fish off a bed this morning and then the rest came just fishing in a canal,” says Carrell.

The bonus bed fish was a welcomed addition considering things didn’t start off as great as the pair would have liked.

“We didn’t have a fish, well, we had one 12-incher, at 10 o’clock and we rolled into a new area where we got a couple bites in practice and Jackson got bit and I pitched back in there and caught a 4-pounder,” Kurtz explains, who is a senior majoring in agriculture engineering technology with a minor in construction management. “We just kept on fishing and got bite after bite on this one 150-yard stretch in a canal.”

“I don’t know if they were sitting there waiting to pull up with this warm night we had, it’s kind of like a staging spot,” adds Carrell, who will graduate this May with a degree in agriculture engineering. “Tomorrow hopefully they won’t leave, but we don’t know how they’ll react to this cold front since we’ve never been to Florida before.”

Not knowing what the cooler weather that’s pushing into Florida will do to their fish, the Sam Houston team caught six quality fish and left their canal. While canals can be fickle in Florida, the plus side for them is that they don’t have any other anglers fishing near them. The downside is that the canal is about all they have to work with.

So, hopefully that birthday magic can last a little longer for Kurtz and Carroll.

“We have just that one magical area,” Kurtz says. “We got an early boat number tomorrow and we're gonna head there and see what happens. The canal is pretty long and we only fished about 100 yards of it and there’s about 700 yards of it we didn’t even touch, so we’ll see.” 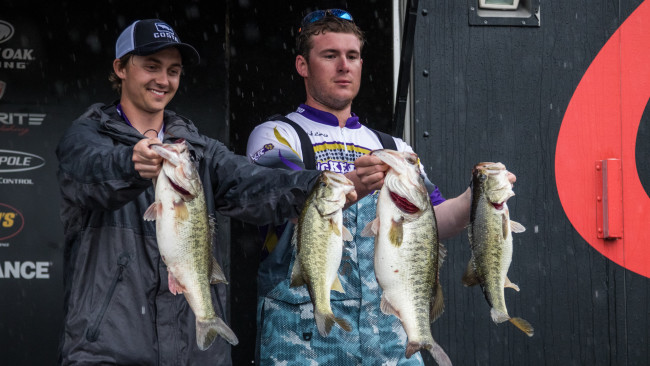 For Nathan Doty and Jacob Louis, things couldn’t have played out any better to start their championship campaign, especially since they didn’t think they were on the bag they brought to the scale this afternoon.

“We found two schools of fish on an offshore spot and we caught a couple little ones in practice and that’s all we had,” says Louis, who graduated last May with a degree in environmental science. “We went back to that this morning, and bam, caught a limit of little ones right away. We hit that spot a little later in the day and those big ones showed up on the spot and it happened.”

The McKendree team isn’t fishing a specific spot, rather a bigger general area that is holding a decent school of fish.

“It is a decent size area and we’re catching fish all around, so we’re fan-casting a lot and grinding it out,” Doty says, who’s a junior majoring in environmental studies.

Catching roughly a dozen fish throughout the day, Doty and Louis culled almost their entire bag in the afternoon. Once they caught their big fish – including one close to 8 pounds – they left to let the juice rest.

While they aren’t sure what to expect tomorrow, having just the one area will force them to commit to it.

“Fishing changes regardless, whether the weather stays the same or not,” Doty says. “So this front has our nerves up a little bit, but I tell you what, we’re going to go out there and give it our all.” 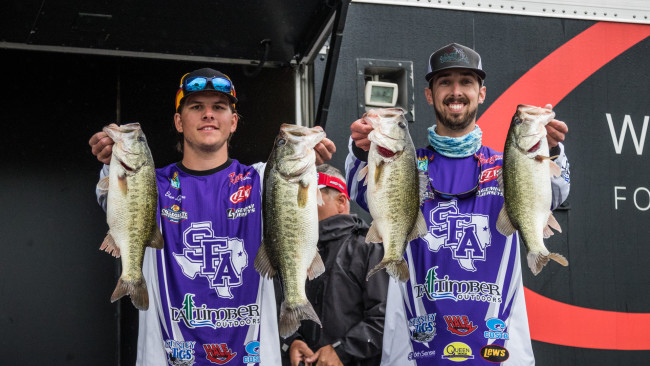 Florida may be a long way from Texas, but Ethan LeGare is feeling right at home and along with partner Hank Harrison the two scrapped together over 21 pounds to land in third.

LeGare actually called Florida home for six years, and though he didn’t spend much time on the chain, he learned a lot about how Florida bass behave. But, Florida experience aside, the duo also spends plenty of time on Sam Rayburn Reservoir, so they know their way around grass.

In practice, the dual sampled almost all of the lakes on the chain.

“We covered most of the lakes except for Griffin because we heard all the pros from the Pro Circuit were in there, so we ruled that out even though it has some of the best grass,” LeGare says.

“It got to the point where we got picky finding our spots and were able to do some early-stage practice with technology – Google Earth and the Humminbird FishSmart app – so we were able to have a decent game plan before we got here,” Harrison adds.

Because of the homework they put in, the two were able to dial in a pattern that they could run with ease around the chain.

“We had our bag by about 11 o’clock and once that rain started to hit we moved off and didn’t hit our spots hard and went looking again to find more stuff in different areas,” says Harrison, who’s majoring in marketing.

As far as tomorrow goes, the Stephen F. Austin crew isn’t too concerned about the weather or their fish moving. The want to stick with their plan and adjust tactics if need be, but not areas they’re catching their fish.

“We got the idea today that they are living there and are prespawn and from that we think they’re going to stay and maybe hunker down a little,” Harrison says. “But we’re excited to see what tomorrow brings.” 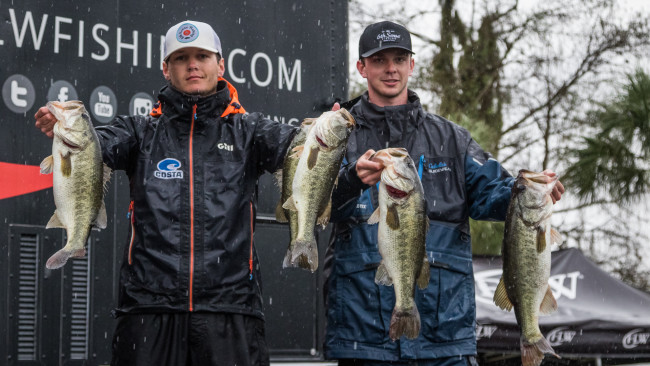 The second of three Sam Houston schools in the top five, Jayce Garrison and Mason Hoke made sure to put their time in practicing for this event, though it wasn’t in Florida. They opted for a lake close to home that sets up a lot like the Harris Chain in order to shorten the learning curve.

“We got a little home lake at home called Sheldon that sets up just like this place and we put in a couple hours out there,” Garrison explains.

“It helped us find a pattern, but other than that, man, we had to fish,” Hoke adds. “We got like eight bites.”

Hoke admits that focusing their efforts in one lake made the most sense for the few days of practice they got and so far, so good.

Like many of the other top teams, Hoke and Garrison caught the majority of their weight early before the rain set in. Even though they only got one bite in the afternoon, the two are confident that they can catch fish again tomorrow.

“We know our fish aren’t going to leave, all they’re going to do is hunker down,” says Garrison. “So, we’re probably just going to run the exact same pattern we’re doing and just slow down.” 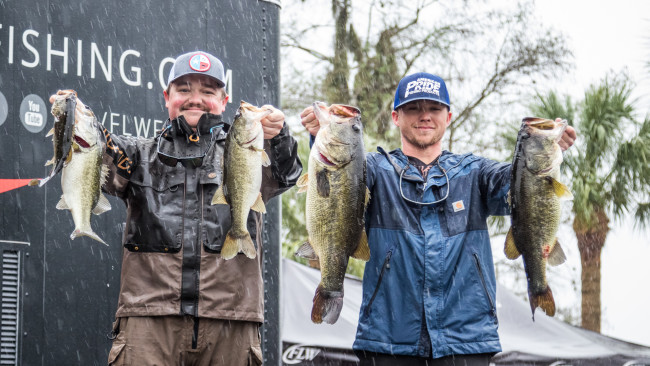 Finishing out the hat-trick for Sam Houston in the top spots, Matthew Sewell and Joshua Perrin were first team to weigh a 20-pound bag on Wednesday. While their lead didn’t last, they didn’t fall far and are in prime position to keep their name in the conversation for national champions.

“We focused on Lake Griffin and found an area we liked and thought it would be pretty heavily pressured, got in there today and there was nobody in there,” says Perrin, who is a senior majoring in agriculture engineering. “Around 9:30 I was spun out, not catching them, but the sun came out and I looked down and probably about a 7-pounder was locked on a bed. On the first flip I broke off on her, then I picked up another rod and on the third flip I caught her.

“I went a little further down and I saw one at the trolling motor and kicked mud all over her bed. I came back 10 minutes later and she swam off. I backed off and sat there for about an hour and started to think I was stupid, but I knew it was a giant. I caught the buck and in the next three flips I caught her and she was probably an 8 or a 9.”

The pair left Griffin with only three fish and were running short on time before they had to check in for the day, so they made a stop not far from takeoff and it panned out to produce the two other fish they needed for a limit.

With only five keepers on the day, two of which were bed fish they had no idea were there until today, the duo is optimistic about repeating another 20-pound day.

“I know there are giants in there and I saw a couple people swing on some big ones in [Griffin], so we’ll see,” Perrin says. 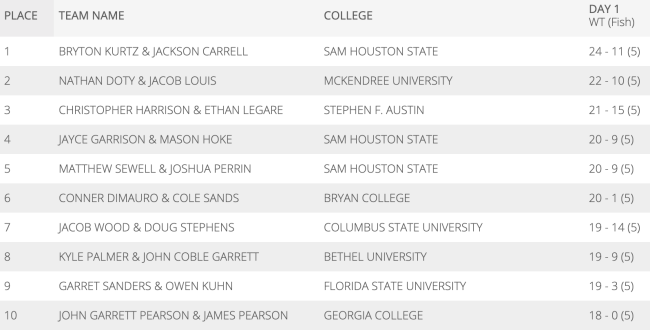