It's a blustery and cool day on the Harris Chain 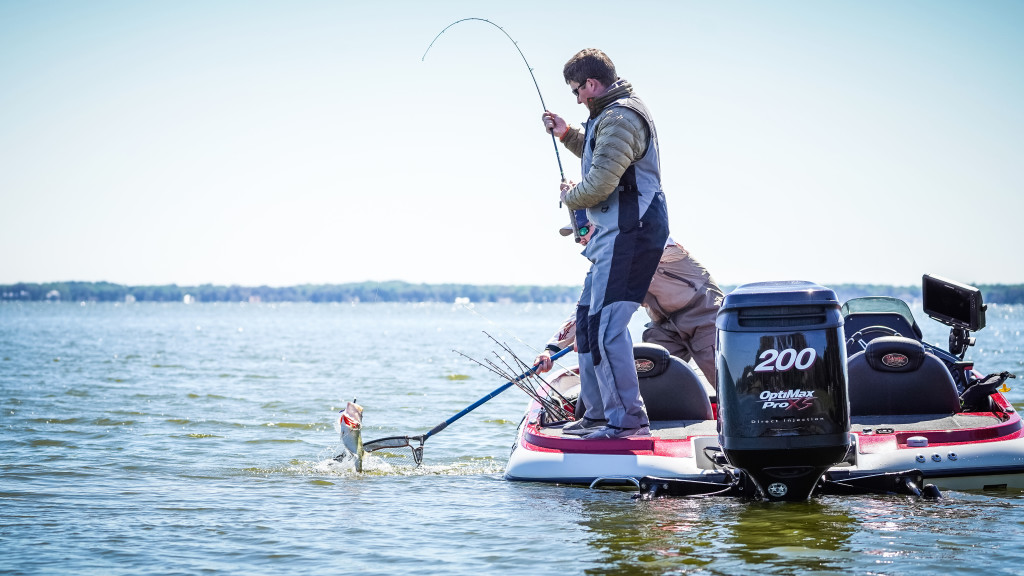 Day two of the Abu Garcia College Fishing presented by YETI National Championship presented by Lowrance is underway on the Harris Chain. The link to yesterday's top patterns is below, and we'll try to check in here about every hour with updates from around the field. 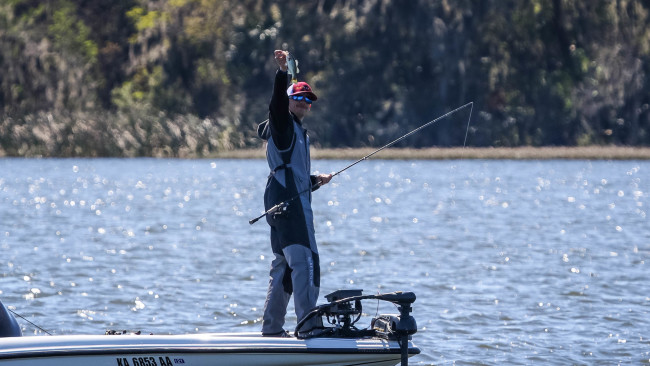 With only an hour and a half left before the first flight checks in there are plenty of teams scrambling to make something happen in order to try and move inside the top 10 to fish tomorrow. A lot of the teams that spent their time up in Griffin have started to work their way back. The bite seems to have slowed in the early part of the afternoon, but with the water temperatures slowly climbing it’s not wild to expect teams in the last flights to take advantage of a late bite in the warmest part of the day. Our coverage team is off the water, so tune in at 3 p.m. ET to see what teams will qualify for the final round because there will be plenty of shuffling today on the leaderboard.

Bethel – Cully Scroggins and Nathon Portch – limit for 10 pounds, one is a 6-pounder 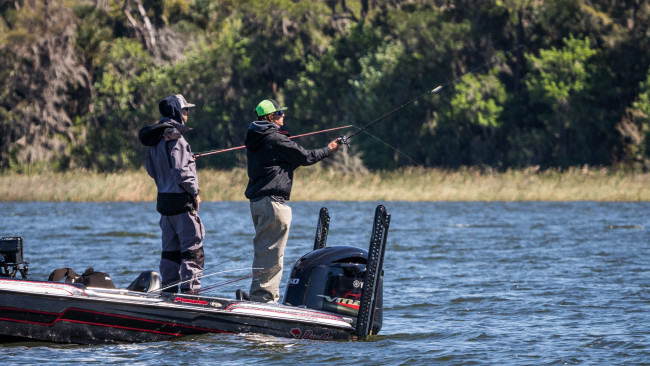 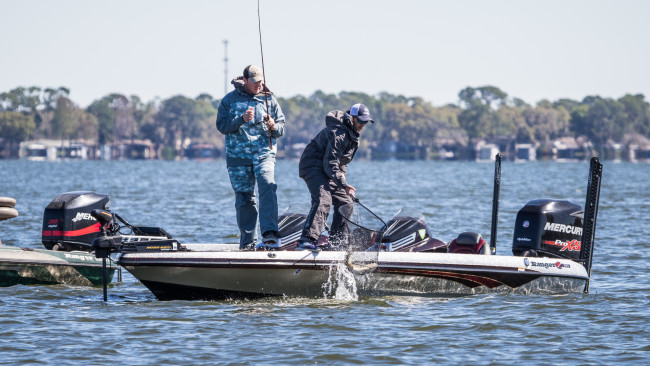 We've now hit most of the folks who did well on day one, and the only thing clear is that they aren't doing quite as well on day two. So far, the best of the bunch is definitely the McKendree University duo of Nathan Doty and Jacob Louis. They put perhaps 12 pounds in the boat fairly early, and culled twice to get over 15 pounds as we watched. The leading Sam Houston State duo of Bryton Kurtz and Jackson Carrell have assembled a limit now, but it's just babies at this point. 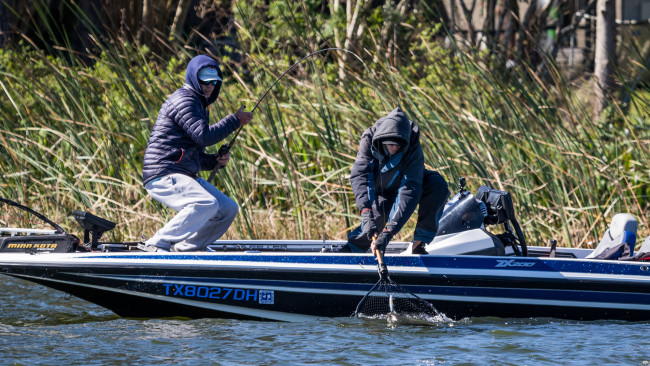 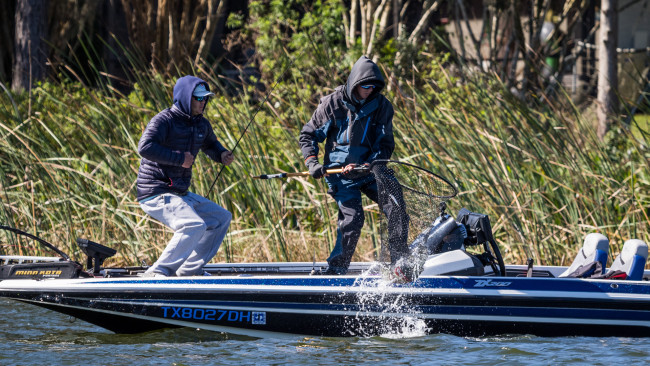 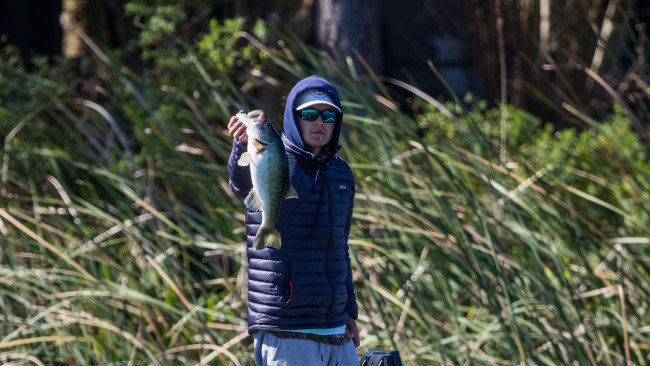 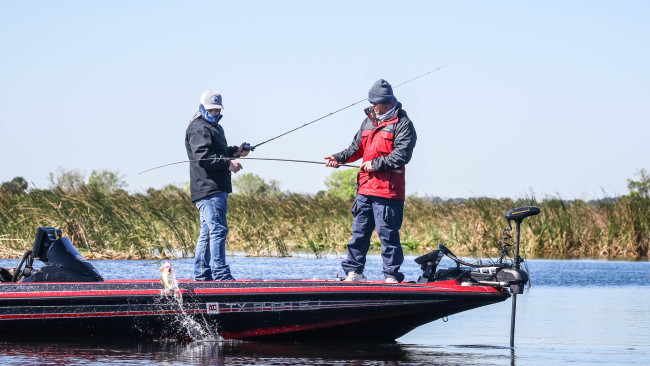 The wind is still blowing pretty good, but the sun is shining and making it feel a whole lot nicer outside than it did at takeoff. In Griffin, there are few more teams exploring the marshes than there were on day one, but nobody we’ve talked with has the makings of a megabag punching mats. The fifth-place team of Josh Perrin and Matthew Sewell of Sam Houston State are back where the magic happened yesterday in Griffin, but only have one small keeper in the box. Elsewhere, the McKendree University duo of Nathan Doty and Jacob Louis have a limit worth 13 pounds. 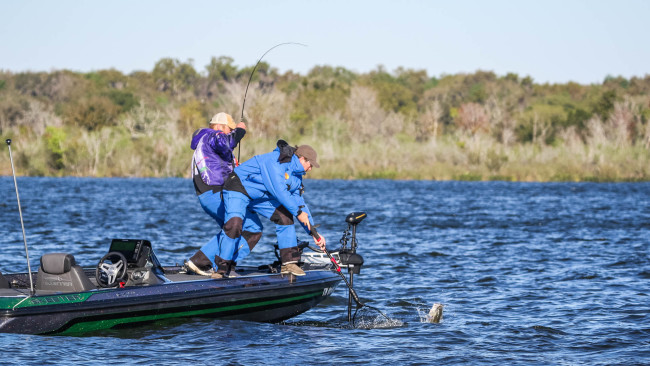 Early this morning, the weather is pretty brutal for Florida. Though it is plenty sunny, it's quite cold, and the wind is blowing pretty good. Still, some of the teams are catching, especially offshore. The leading Sam Houston State duo of Bryton Kurtz and Jackson Carrell have just two fish so far, but, they caught them both on a patch of offshore grass.