What got it done in the National Championship 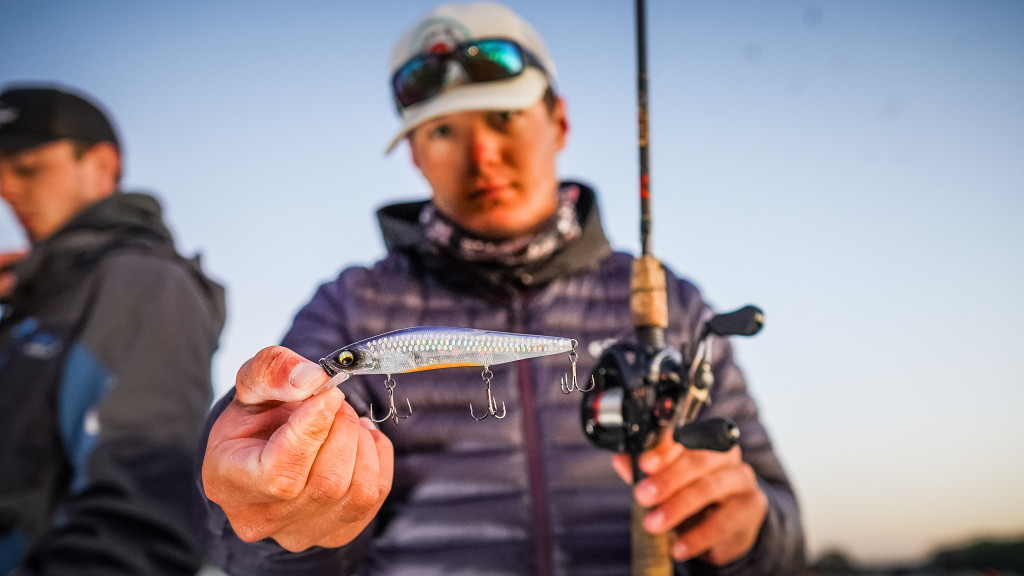 Between cold fronts and pressure, the Harris Chain has been a tough nut to crack, yet the top teams in the Abu Garcia College Fishing presented by YETI National Championship presented by Lowrance got it done with a combination of plastic and hard baits. Certainly, the teams learned a thing or two from the Tackle Warehouse Pro Circuit event held the week prior on the chain, but you still can never go wrong with a Texas-rigged worm, vibrating jig or lipless crankbait in Florida. If you’re battling cold-front conditions on a grass fishery, or heading to Florida, you’ll want to make sure you’re stocked up on the baits below. 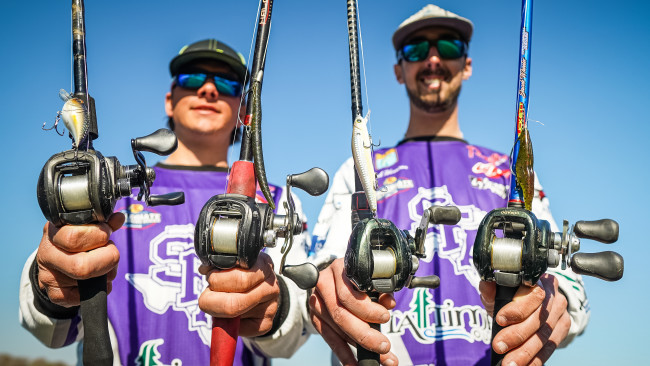 1. Targeting mostly staging prespawn fish, the Stephen F. Austin duo of Hank Harrison and Ethan LeGare caught their biggest bag of the week on day one with a 6th Sense Curve Finesse squarebill and a 6th Sense Provoke jerkbait. After the cold front they slowed down with a soft plastic stick bait on a drop-shot or Texas rig and dragged a light Carolina rig or split-shot rig with a Zoom Salty Fluke. 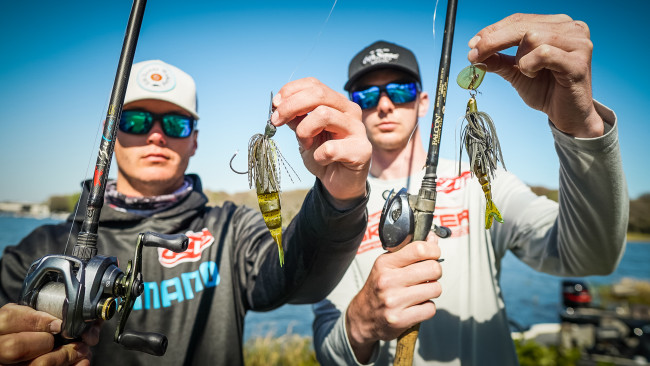 2. Sam Houston State’s Jayce Garrison and Mason Hoke went all-in on the vibrating jig bite for their second-place showing. Hoke used a Terminator Shuddering Bait matched with a  Yamamoto Zako for a bigger profile bait and different vibration to key on bigger bites. Garrison stuck with a  Z-Man ChatterBait Jack Hammer, but started the final day with a 6th Sense Divine swimbait  trailer before they had a limit and switched to a Lake Fork Live Magic Shad for bigger bites later in the day. 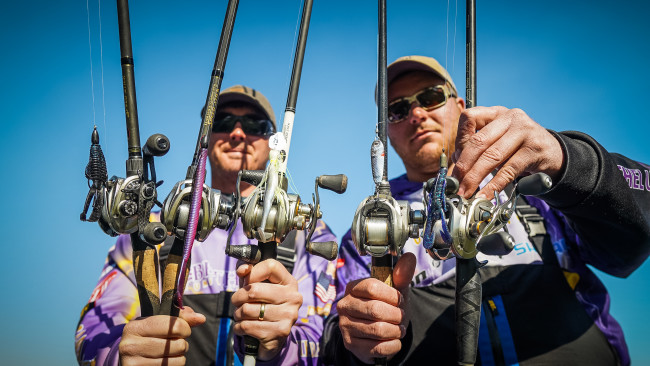 3. Fishing offshore and relying on a big bed-fish bite later in the day, the Bethel team of John Garrett and Kyle Palmer used a smattering of baits, with the majority of their fish coming from either a spoon, Strike King Magnum Cut-R Worm, Thunder Cricket or Rage Bug. 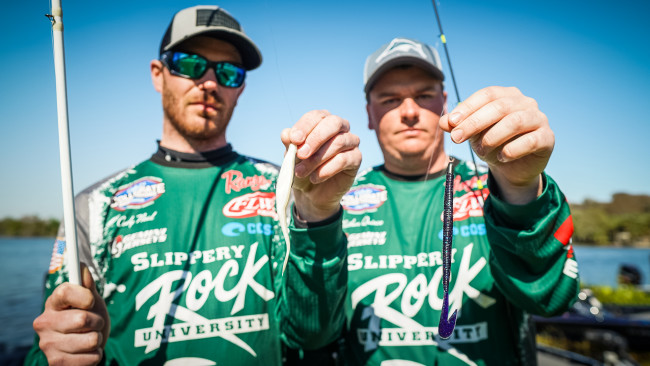 4. The Slippery Rock University squad of Nathan Quince and Cody Neal had Helena Run – the canal leading to Lake Denham – all to themselves throughout the event and relied on a white Zoom Fluke and Zoom Ultravibe Speed Worm (green pumpkin) to carry them to the top 10. 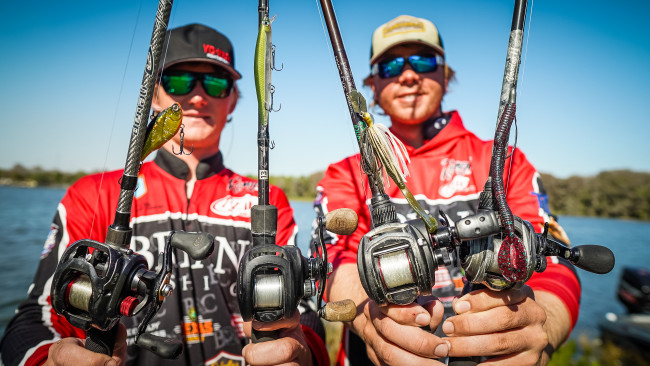 5. Conner DiMauro and Cole Sands of Bryan College targeted offshore grass for their bass. They had four key baits which were a Rapala Shadow Rap, a Yo-Zuri Rattl’n Vibe (blue chrome or gold shiner) thrown on Yo Zuri TopKnot 14-pound fluorocarbon, a Texas-rigged Zoom Z Craw Worm and a Z-Man ChatterBait Jack Hammer. 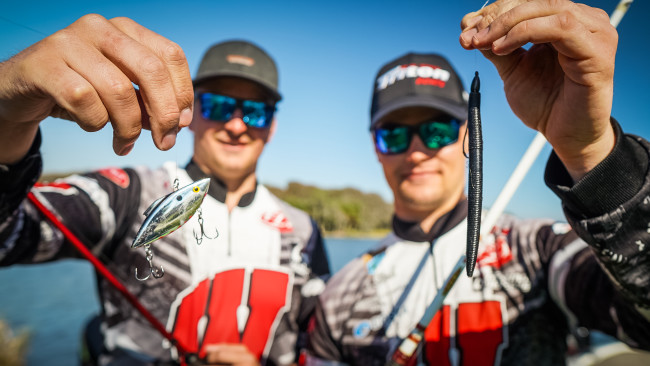 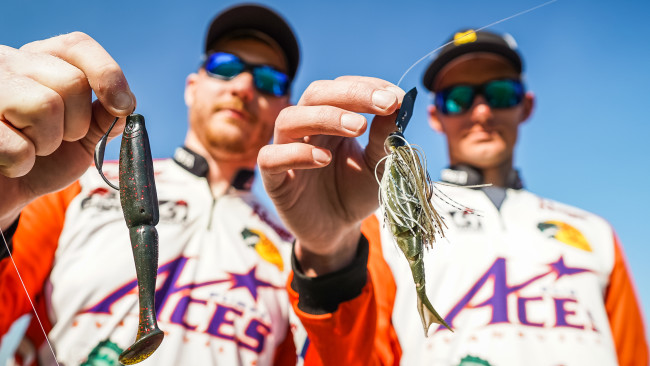 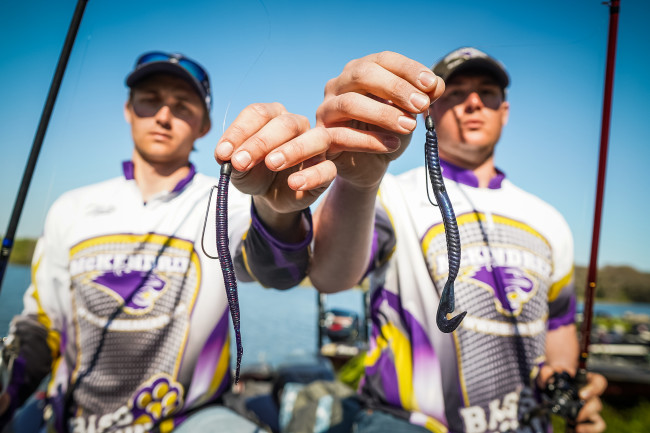 8. Staying in the top 10 all tournament, McKendree University’s Nathan Doty and Jacob Louis put some Florida staples in hand and never looked back. Doty preferred a Zoom Ultravibe Speed Worm, while Louis threw a Gambler Burner Worm, both Texas-rigged with a light weight. 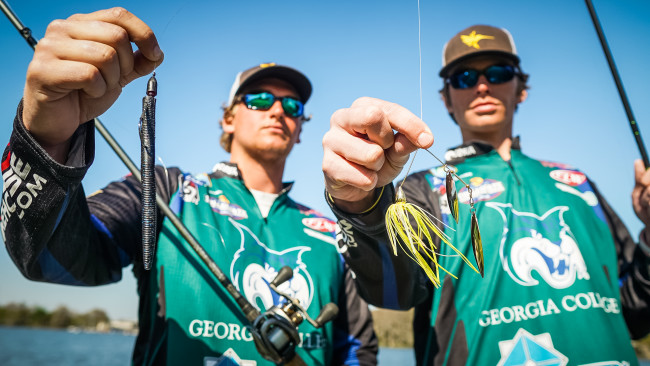 9. The Georgia College duo of John Garrett Pearson and Rudy Pearson had a one-two punch of flipping and casting. They started the tournament split between throwing a War Eagle spinnerbait and flipping a ½-ounce tungsten weight with a Bass Pro Shops Stik-O. By the end of the event they had transitioned solely to flipping and added a Zoom Z Craw (South Africa special) to the mix. 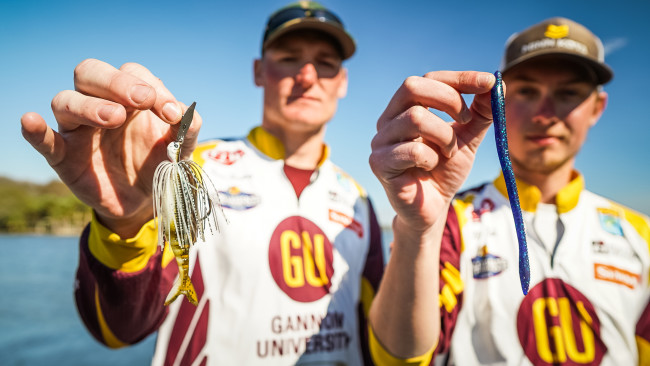 10. Rounding out the top 10 was the Gannon team of Nolan Pyle and Aaron Bunting, who found a shell bed and milked it for all it was worth. They opted to throw either a ½-ounce Z-Man ChatterBait Jack Hammer matched with a Yamamoto Zako or a Lew’s TP-1 Black rod to throw a Carolina-rigged Zoom Trick Worm (junebug) on a ½-ounce tungsten bullet weight.