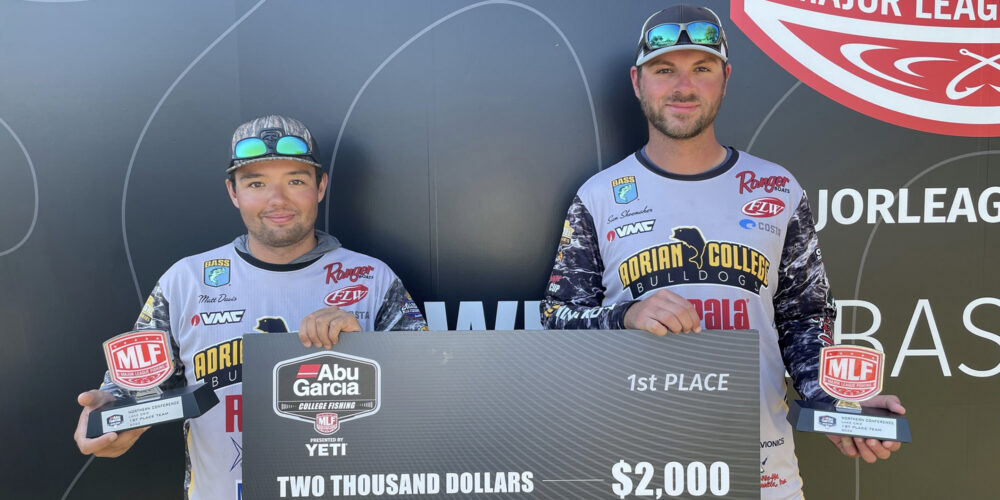 “We had found some decent fish in practice,” Davis said. “Maybe not the quantity we wanted, but we were catching some really nice-sized fish.”

“There wasn’t a whole lot of wind (Friday), and that kind of scared us,” Shoemaker said. “But when we got out there, there was still a little bit of chop to the water. On one of the first couple of pitches, Matt hooked up on one right underneath the boat. It came up to the surface and jumped, and I don’t know if there was a nick in the line or what, but it snapped off. That fish was every bit of 4 pounds.”

The Bulldog team didn’t let that rocky start faze them, and they continued to focus on their game plan – using their Garmin LiveScope to toss baits at boulders in 16 to 24 feet of water in the Middle Bass Island part of Lake Erie. Davis said he threw a Ned rig with a green pumpkin Z-Man TRD, while Shoemaker used the same bait on a drop-shot rig. Their tactics resulted in seven smallmouth during the course of the tournament. Davis said they caught all of their fish between noon and 2:30 p.m.

“We went and fished a couple of other areas, but for some reason, that spot was just a gut feeling. It was calling our name,” Shoemaker said. “We caught a lot of drum and catfish, but once we caught some brown fish in between, it gave us the confidence to stay in that area and put our nose to the grindstone and try to make something happen.”

Davis said the key to their victory was moving into water that was a bit more shallow. He said the bright sun was moving smallmouth into the 16-foot range to hold on large boulders.

“This is just a very surreal moment,” Shoemaker said. “I didn’t think it was going to pan out like that. But we’re very glad it fell into place. I just can’t put this feeling into words.

“I’m a senior, and I’ve been fishing MLF since I was a freshman, and to come out and put that much effort into every event and then get the win on Erie, especially as tough as that part of Erie is … I’m just super stoked,” Shoemaker said.

MLF College Fishing teams compete in three regular-season tournaments in one of five conferences – Central, Northern, Southern, Southeastern and Western. The Top 10 teams from each division’s three regular-season tournaments and the Top 20 teams from the annual Abu Garcia College Fishing Open will advance to the following season’s National Championship.