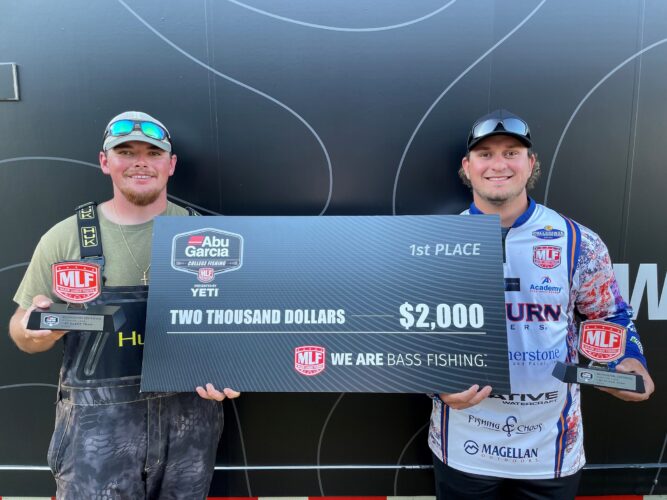 “We got there for practice and started on a secondary point instead of taking off down the lake,” Parrish said. “That was the best decision we could have made, because we found shell beds. In the first five minutes of finding the shell beds we caught a 3½-pound smallmouth. So, we decided to run shell beds for the tournament.”

Parrish said the team started the tournament fishing mid-lake, below Waterloo, and caught two 3-pound smallmouth in the first 15 minutes of competition. They threw Alabama rigs over the tops of the shell beds and stumps. Their method produced 25 to 30 keepers over 2¾ pounds throughout the day.

“It just went right for us,” Parrish said. “As the water warmed, we found the bass holding on the stumps more than on the shell beds.

“Throughout the whole day we were nauseous because we were so excited and nervous,” Parrish added. “When we put the bag in the tray and the scale said 18-7, we were speechless.”

MLF College Fishing teams compete in three regular-season tournaments in one of five conferences – Central, Northern, Southern, Southeastern and Western. The top 10 teams from each division’s three regular-season tournaments and the top 20 teams from the annual Abu Garcia College Fishing Open will advance to the following season’s National Championship. The 2023 MLF Abu Garcia College Fishing Presented by YETI National Championship Presented by Lowrance will be held on Lake Toho in Kissimmee, Florida, Feb. 21-23, and is hosted by the Kissimmee Sports Commission.