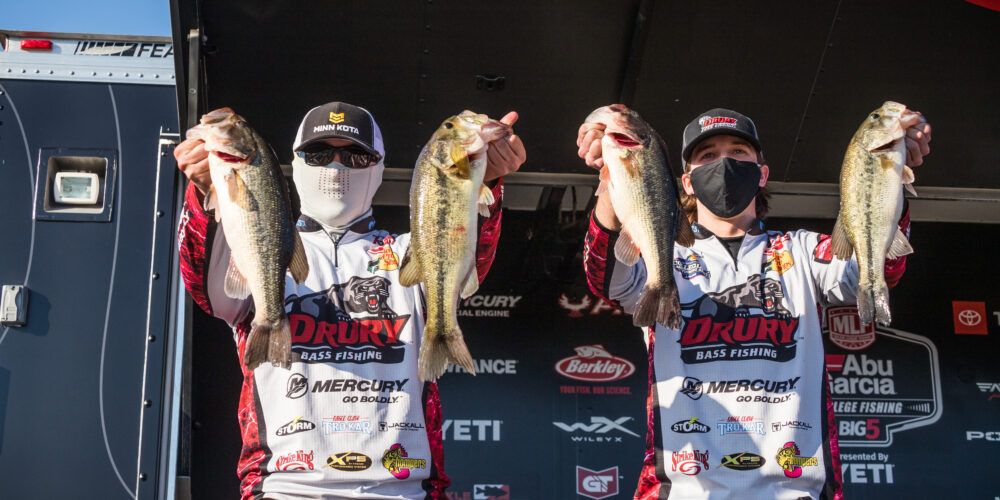 Weighing 13 pounds, 14 ounces, the Drury University team of Cole Breeden and Cameron Smith took a slim lead on day one of the Abu Garcia College Fishing presented by YETI National Championship on Grand Lake. The event is presented by Lowrance and hosted by the City of Grove and the Grove Convention and Tourism Bureau.

Though the fishing was brutally tough for most of the teams, Breeden and Smith are in a tight race for the top spot as six other teams caught 12 pounds or better. Today, while many teams struggled to get a bite, the Drury duo were culling early.

“It started off pretty strong, we had a limit by about 8:45, like a solid 10- or 11-pound limit,” says Smith, who is a senior majoring in biology. “We just gradually upgraded throughout the day.”

“We replaced little ones with ones that were just a little bit bigger,” says Breeden, who is a junior marketing major. “And, we had two that were about 3 pounds, so that really helped us.”

Breeden and Smith say they’re mostly fishing shallow, but they haven’t come close to running into one of the 5- or 6-pound tanks that roam Grand Lake.

“We’re in an area where there are lots of fish, I don’t really think numbers are a problem,” says Breeden. “There’s lots of bait and stuff, there are just so many little ones. We’re hoping today and tomorrow with the warm weather that maybe some big ones will move up.”

“We’re finding lots of little schools of males up shallow,” says Smith. “They’re grouping together. We’re waiting for the females to follow suit.”

Though the pair says they haven’t seen a fish over 3 pounds so far, they’re feeling pretty good about their situation all things considered. Even without a lot of Grand Lake experience, things are shaping up well.

“It’s very Ozarks,” says Breeden. “It’s just like our home on Lake of the Ozarks and Table Rock. A lot of the stuff looks real similar, so we’re just doing the same thing we’d be doing at home.”