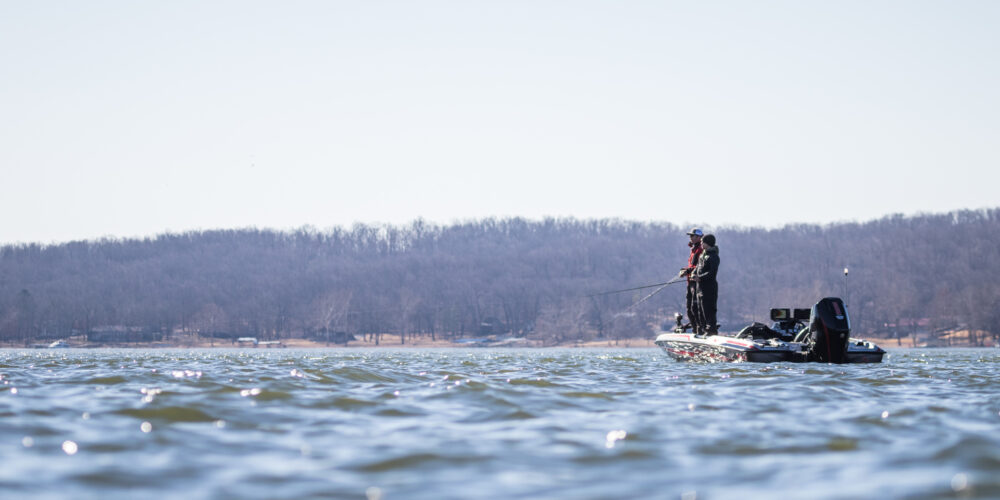 Day 1 of the 2021 Abu Garcia College Fishing presented by YETI National Championship presented by Lowrance on Grand Lake has been slow going from a fish catching standpoint thus far. Still, teams are managing to put keepers in the boat and with the sun shining down hopes are high for the bite to pick up as the afternoon wears on.

Temperatures in the 30s to start the day have since given way to a decent breeze and now the thermometer is creeping towards the 60s. Despite the warming trend, the bite has been slow thus far, which was expected, and teams are spread from the dam to up the rivers.

From a technique perspective, the umbrella rig has been the main deal for teams across the lake. Water temperatures vary depending on where you’re at on Grand, but range from the upper 30s to even the low 50s when you get into the Elk River, so it’s no surprise an A-rig is a favorite for the teams.

Pitching docks with a jig or rolling a spinnerbait alongside them have also been predominant patterns with varying success. They are Grand Lake staples and are proven ways to get big bites, but cold, dirty water in a lot of the key areas down the lake have left bites few and far between.

The only team our on-the-water crew was able to come across with a limit in the boat was McKendree’s Tyler Christy and Trey Schroeder. We didn’t get an update on their size, but a limit could go a long way in this event.

Bryan College’s Jake Lee and Mason Cizek had four fish in the ‘well by mid-morning. They were fishing up the lake, but different than the other teams around them, which we’ll let them elaborate more about as the week progresses.

Tristan McCormick and Steven Mills of Bethel University were the closest to having a limit, and should have one if not for some miscommunication this morning. The duo was under the impression the minimum-length limit was 15 inches (it’s actually 14 inches for all species) and turned back three would-be keepers before realizing their error. They had two fish in the box when we caught up with them and with as good as they are you can bet they’ll make up for the mishap this morning.

Here’s a rundown of other teams with fish in the box:

As is usually the case with tournaments early in the year, the afternoon bite should be the best, and with our crew off the water you’ll have to tune into the live weigh-in starting at 3 p.m. CT to see who’s got ‘em.