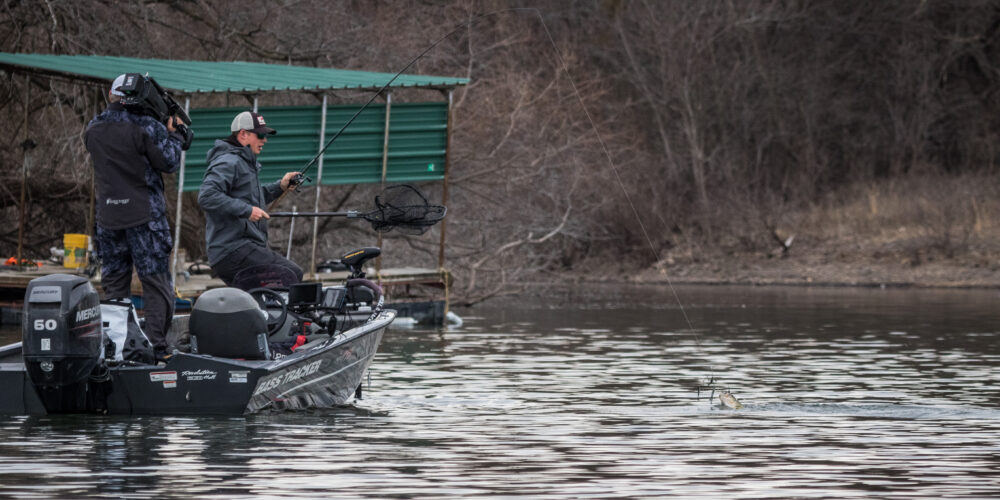 The final day of the 2021 Abu Garcia College Fishing presented by YETI National Championship presented by Lowrance on Grand Lake has been a good one. Most of the teams are catching bass pretty well, and the weather hasn’t been too bad yet.

On the weather side of things, it’s been a bit blustery and cold all morning, with mostly overcast skies. Around noon, some light rain moved in, and it looks like it’s going to blow through sometime around weigh-in. That’ll make it a little rough for the anglers running back from down the lake, but certainly nothing they haven’t seen before.

Weigh-in is shaping up to be quite a show. Though no team has crushed a 20-pound bag to really get out in front, the fish are really biting today compared to previous days. Like Days 1 and 2, a jerkbait has been doing most of the damage, but the semi-nasty weather and last night’s non-freezing temperatures seem to have the fish biting.

Leading the day so far, Cole Breeden and Cameron Smith of Drury have about 14 pounds in the ‘well. Behind them, Josh Kelly has over 13 pounds and is unofficially in second.

After the tentative top two, things are a bit murkier. Grant Harris and Beau Browning of Drury and Harbor Lovin and Zach Martin of Murray State have limits for more than 10 pounds. Somewhat surprisingly, Zach Potter and Alex Johnson have not caught a limit yet – the Day 2 leaders still only have three small keepers in the boat.

Elsewhere, Luke Ripple and Blake Albertson of Murray have a limit, as do Tyler Christy and Trey Schroeder of McKendree. Josh and Justin Luetkemeyer have just three, and Grayson Morris and Jacob Pfundt of Montevallo have just two, as do Zach Manneback and Gunner Wilson of Adrian.

Weigh-in starts at 3 p.m. CT, and you’re going to want to tune in – nobody has the win wrapped up yet.