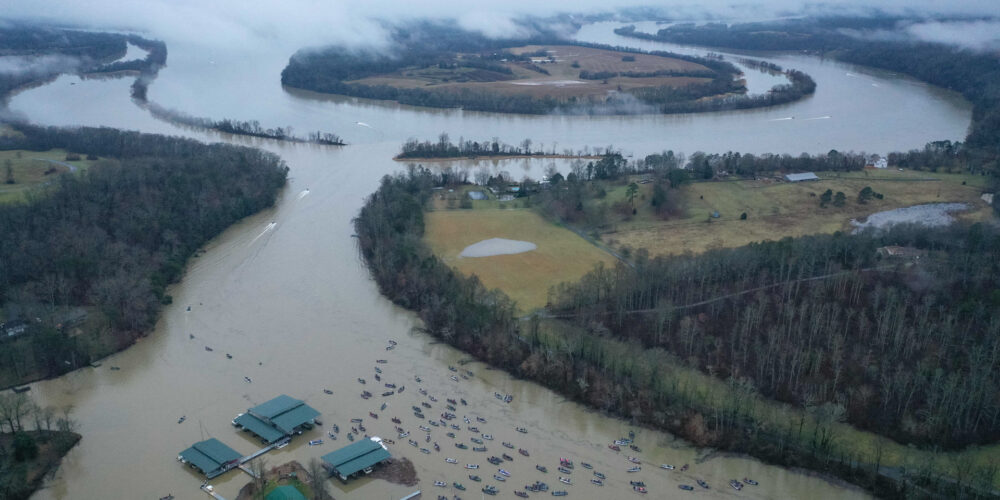 DAYTON, Tenn. – The eighth annual Abu Garcia College Fishing Presented by YETI Open kicks off under typically volatile late February conditions on Lake Chickamauga. With a Phoenix boat and a bunch of National Championship berths on the line, the anglers have muddy water and a lot of current on their hands this week. Still, turbulent conditions weren’t enough to keep a record field of 275 teams away, and warm weather should keep the bite pretty decent.

The folks in Dayton, Tennessee, have done a fantastic job of marketing Chickamauga as a premier bass fishing destination. But, in fairness, it’s a pretty easy sell. Chickamauga, at 36,000 acres, is by no means the biggest reservoir on the Tennessee River, but it’s one of the country’s top destinations for anglers wanting to target double-digit bass. Thanks to the fertile waters of the Tennessee, healthy grass growth in the spring and summer, and an injection of Florida-strain genetics, Chickamauga is the kind of place where 30-pound limits are possible.

The upper end of the reservoir snakes back and forth in riverine fashion before joining up with a series of backwaters and shallow sloughs in its midsection and eventually widening out into a classic Southern reservoir at the lower end. Because of the distinct zones, Chickamauga offers a wide variety of structure and cover to fish. There’s plenty of grass in the spring and summer, though it won’t be a massive factor in February, so anglers will be fishing stumps and laydowns on shallow flats, points, ledges, creek channels, gravel bars in the current, and various types of bottom content transitions.

Late winter and early spring on Chickamauga can produce some epic fishing with stable conditions, but this week will be anything but. A local on the lake fishing for Bryan College, Conner DiMauro said big rain has the lake fairly churned up.

“Last week it got pretty good, I caught a bunch of fish last week,” said DiMauro. “But, we got a lot of rain this week, it’s got the water muddy, and it’s a couple feet up from winter pool. So, it’s changing rapidly. We got some rain at the beginning of the week, and it dumped last night, it’s come up about a foot since last night.

“I know it changed a lot of stuff for a lot of people who were down here earlier in the week and caught fish,” said DiMauro. “It’s a changing lake as we speak, because it’s going to keep getting more muddy as the creeks run off.”

Though the water is above winter pool, it’s still not high by any means. So, you won’t see anyone flipping flooded vegetation or getting too out there on the technique side of things for winter and the early prespawn.

While the surge of incoming water and mud is a wild card, Chickamauga has more grass in it than usual for this time of year. That could add a level of stability to the fishing that isn’t always present when the Tennessee River starts rolling in the spring.

“This year especially there’s a lot of grass left,” said DiMauro. “There’s still grass on the main river bars, and there’s grass on some of the back-channel stuff where it grows in the summer. It didn’t die off this year; there’s grass in some areas I’ve never seen it before this late in the winter. We’ve caught a couple fish out of it, it’s actually got a couple feet of water in it now.”

The list of baits to bring for the winter and early spring on the Tennessee River isn’t that long. It starts with an umbrella rig and a lipless crankbait and contains a handful of moving baits after that. For this event, you can expect the staples to play, but maybe with more focus on vibration than swimming things.

“With the water coming up and getting muddy, there will be a lot of Rat-L-Traps and lipless baits,” said DiMauro. “It dominates anyway this time of year, but now that the water is up and got stained it’s going to help that bite out if you can find ‘em.”

Of course, that’s not entirely the only thing going.

Even with rising, muddy water, you can’t count out chasing fish with forward-facing sonar.

“We found some clean water this morning and caught a couple fish on an Alabama rig and watched them follow a jerkbait,” said DiMauro. “That’s definitely still in play, and it’s a way to target some bigger fish. But, the mud moves around with the current, once the mud washes out into the main channel, I’d say it will take away from that bite.”

With so much changing, most everyone in the field expects good fishing, but not great fishing.

Fishing for Auburn, Logan Parks figures that it will still take good weight to win.

“It’s fishing pretty tough for me,” said Parks. “I’m sure some guys are catching them, but it’s changed a lot from practice until now. It’s going to be interesting to see who can adapt to that change.

“It’s Chickamauga, so I still think it will take over 20 a day,” said Parks. “It’s not as good as I was hoping it would be, I was thinking maybe 50 pounds in two days, but I don’t know about that now. Probably 22 a day would do it.”

DiMauro is a little more pessimistic but still thinks the fishing will be decent.

“The lake’s gonna keep changing during the tournament, as everything settles down,” said DiMauro. “And I think we’re going to get a little more rain. But, it’s not going to get cold, it’s not bad conditions. Somebody is going to catch them. I wouldn’t say the bite is great right now, but I’ve definitely seen it worse. There will be some good bags caught. I think 41 pounds will probably be a safe number for a two-day total.”