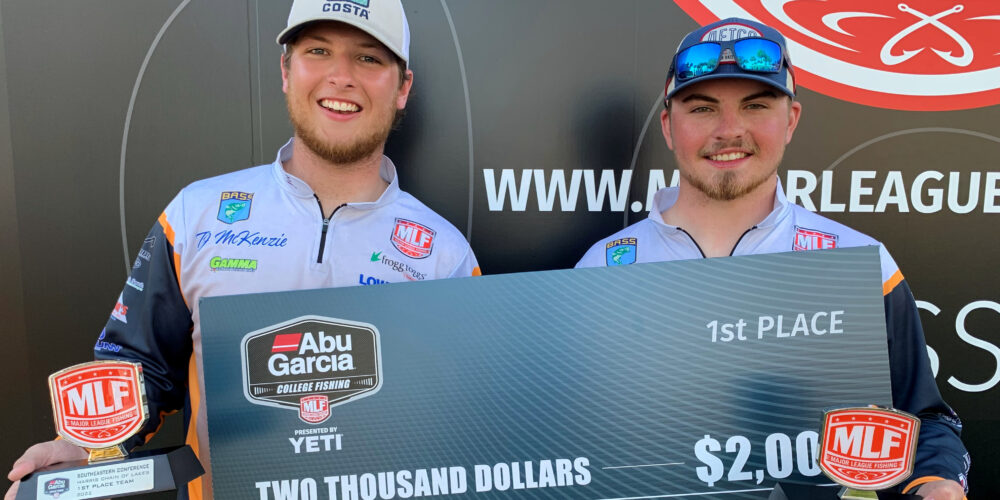 A total of 189 teams participated in this event, which was the largest season-opening field in MLF College Fishing history.

The Emmanuel College team had hoped to bag a limit of 30 pounds during competition, but their five fish weighed enough to give them a 1-ounce victory over Webber International University.

“We had the mindset that we didn’t want to come in with less than 30 pounds, because that’s what usually wins these college tournaments,” Jenkins said. “That was our complete drive all week.

“We had two offshore spots that we fished all day, and we alternated between those two spots every hour and a half,” Jenkins added. “We had people fishing down our stretches all day, but they were power-fishing and we were fishing slow. We probably spent a minute and a half on each cast.”

Jenkin said his bait of choice was a 6th Sense Ridge Worm, while McKenzie focused on a Zoom Speed Worm.

“We know for a fact there are bigger fish where we were fishing,” Jenkins said. “I think if we would have had two more hours we probably would have caught a fish over 8 pounds. But that didn’t happen.

“Our whole conversation idling back through the canal was that we were expecting a Top 10 finish. We weren’t expecting to win, but we kept grinding all day.”

The top 10 teams that advanced to the 2023 College Fishing National Championship are: