ETBU Duo of Bird and Keith Win on Chickamauga 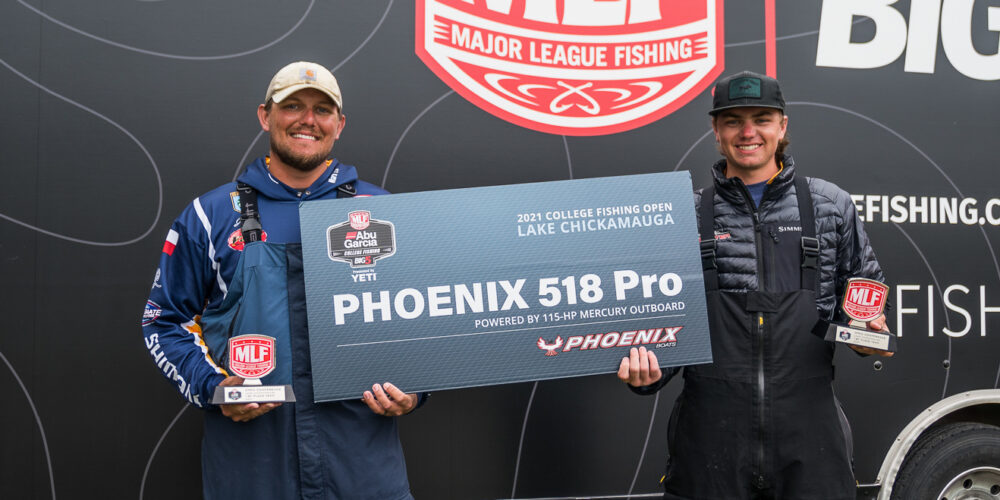 Fishing in sloppy, wet conditions all day, the East Texas Baptist University team of Cannon Bird and Jacob Keith rose from fifth to first to win the  Abu Garcia College Fishing presented by YETI Open on Lake Chickamauga. With a total of 38-13, the ETBU team won a brand-new Phoenix boat and punched their ticket to the 2022 National Championship.

They topped the home team of Bryan College seniors Conner DiMauro and Cole Sands by 3 ounces.

At about noon Wednesday, Keith used a black and blue Z-Man Evergreen ChatterBait Jack Hammer to haul in a 7 ½-pounder.

“Yesterday, the sunshine moved up some bigger fish and I think that’s why we caught mainly quality yesterday,” says Keith. “Today, we caught a bunch, a bunch of males, but still there was that one female lurking out there that sealed the deal for us.”

Initially, Keith and Bird didn’t think they could vault to the win based off Tuesday’s results.

“Unbelievable, we didn’t think we had a shot. There’s guys that dropped some really big bags yesterday and we only had 18,” Bird says.

After Tuesday’s sun splashed day and beautiful blue skies, Wednesday brought in a cold, driving rain. The morning started with a hard downpour that let up for a few minutes and then returned. Misty clouds overhung nearly every inch of the Tennessee River reservoir.

But Keith and Bird had a plan and executed it methodically and deliberately. They had practiced around the marinas dotting Harrison Bay. The training session gave them confidence for the finale.

“Going into today, we figured, let’s start right back where we caught the 4 and the 3 yesterday,” says Keith. “And immediately [Bird] caught another one and it was about 3 ½ pounds today.”

One of our media boats found the pair in the marina mid-morning Wednesday.

At that point, they only had two in the boat, but that changed rapidly.

“After we left that point, we went to that marina. We were just getting behind the docks and everything,” Keith says.  “It’s mainly a pressure deal. We were avoiding pressure by getting behind those docks. I mean, we were going under walkways and stuff, it just seemed like every time we could get to an area, we could catch one or two good ones.”

Both throwing a Z-Man Evergreen ChatterBait Jack Hammer, the pair used black and blue and fire craw, but with the same green pumpkin V&M J-Bug trailers.

The duo fished the same pattern each day, but thought poor planning may have cost them the chance at a win after Day 1.

“We fished the same stuff again today,” says Bird. “We thought we hurt ourselves yesterday because we left our stuff down south, probably about 10 o’clock or 10:30. We left it and started running back this way, just panicking trying to put together a limit. In the long run, that actually helped us because it made us save stuff that we needed today.”

Winning the tournament is something Bird will never forget.

“I’ve fished a lot of BFLs and stuff, but I’ve never won a big tournament like this, so it’s crazy.”

Right after launch Wednesday, the two friends had a moment that proved prophetic.

“After yesterday we saw we were in fifth and when we put it on plane this morning, we touched knuckles and said, ‘Let’s go try to win it,’” Keith Says.

As they ride back to east Texas, the two will think about the big victory, qualifying for the National Championship and the future. Bird has a lot of college fishing ahead of him, but Keith is a senior and likely not too far away from working in the family air conditioning business.

The personable ETBU senior is working on his master’s degree in business management, but now, he’s thinking about life before graduation,

“I’ve got one more year of fishing,” says Keith. “I might go longer if they’ll let me.”