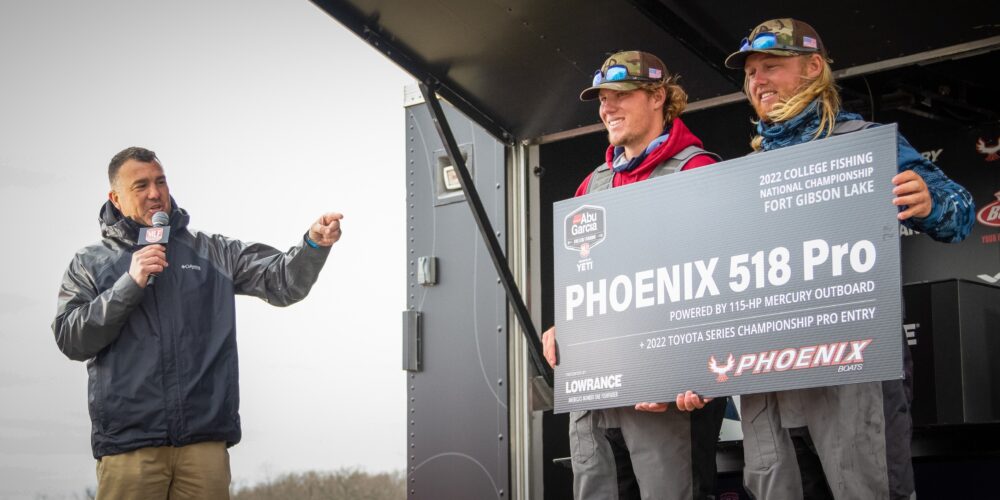 WAGONER, Okla. – One of the more decorated programs in collegiate fishing, East Texas Baptist University has taken down a win in the College Open in recent years, several titles in the Southern Conference and the overall Tackle Warehouse School of the Year title in 2020. What ETBU didn’t have was a national championship of any form in collegiate fishing. But, after three tough days, the duo of Kaden Proffitt and Cason Ragsdale filled that space in the trophy case with a victory in the Abu Garcia College Fishing Presented by YETI National Championship Presented by Lowrance on Fort Gibson Lake.

Weighing 17 pounds, 9 ounces on Day 1, 11-14 on Day 2 and 14-1 on the final day, ETBU totaled 43-8 for the win. More than 3 pounds ahead of Donavan Carson and Landon Lawson of King University, the ETBU squad earned a new Phoenix boat and motor package worth $33,500 and berths as pros in this fall’s Toyota Series Championship.

Both senior business administration majors, Proffitt and Ragsdale are already qualified for the 2023 National Championship and have been cooking with gas of late.

“Last year, we were on the fish to definitely qualify, potentially win, almost every conference tournament we fished,” said Proffitt. “And we just managed to lose fish, make mistakes, and we didn’t qualify all the way up until the last conference tournament in October at Dardanelle. We got on a bite, didn’t lose any fish, and had 14 pounds and finished third. Really, since then, it seems like everything has been rolling.

“We’ve gotten a lot of confidence. We came in seventh at the Harris Chain in January, and we had a Top 20 at Chickamauga in the Open,” Proffitt added. “Nothing has gone wrong in the last six months or so. Things have slowly been coming together since that Dardanelle tournament, and here it all comes together, right here at the natty, where you want it to.”

On stage and after, the pair were both visibly emotional, with Ragsdale grinning ear to ear and Proffitt fighting to keep the tears at bay.

“It still hasn’t really set in I don’t think,” said Ragsdale. “But, we’ve got a long drive to let it set in. Leading Day 1, we were sitting there the morning of Day 2, and we were both sitting there looking at each other like ‘hey, we’re kinda leading this tournament, maybe we should get a little nervous,’ and we just kept our head straight.

“We’ve had a lot of good runs, we’ve had fish on to win it, but we never put it together. This is when we wanted it to come together. We’ve talked about this, we’ve joked about it, and here we are.”

All week, every team dealt with brutal conditions and uncooperative fish. Going into the final day, it seemed like everyone in the Top 10 was due for a bad day. Midway through, that potential seemed to be playing out for Proffitt and Ragsdale.

“We didn’t have fish at 10:30,” said Proffitt. “I still stand by what I said yesterday and the day before. We could go out there tomorrow and zero. We know what we’re running, and there’s fish on it, but there are so few fish, and the bites are so few and far between. I knew there was a legitimate possibility that we’d zero today and fall to 10th place, that’s how fine of a line we were walking, and it worked out.”

As for the actual fishing, Proffitt and Ragsdale didn’t really break any new ground with their techniques this week. Relying on a few standard options and standard locations, they basically milked Fort Gibson for all that they could.

For baits, the pair used a ¼-ounce black and blue jig, a 3/8-ounce Z-Man/Evergreen ChatterBait Jack Hammer in green pumpkin and red as well as a handful of crankbaits. For both the vibrating jig and the jig, they used matching trailers poured by All-In Custom Baits. On the cranking side, a Storm Arashi Silent Square, a SPRO Little John 50 and a 6th Sense Crush 50X, all in shades of red got it done.

Their tactics were based on catching staging fish heading into spawning pockets.

“I was by myself the first day of practice,” said Proffitt. “I knew the water was too cold for them to be pulled up, but I knew it had warmed up enough that they wouldn’t be out deep. I was just looking for those areas where the bank went from steep to flat, or where there was a point outside of a spawning cove. That kind of stuff was what I keyed on that day, and it worked, but when it started warming up, it kinda got iffy. So, what we really started doing then, and kinda all tournament, was keying on those points and transition areas, but then also fishing through the area around it in case someone moved.”

One of the biggest keys for the Texas anglers was fishing slowly, sometimes remaining on Spot-Lock for minutes at a time on seemingly innocuous points.

“We were soaking it, we were spending so much time in every area, making sure to make our bait go in every possible spot a fish could be,” said Ragsdale. “It was deadly slow for us, we’re run and gun, but we were running and gunning as fast as we could, as slow as we could. Even some of our spots that were one or two casts, we’d sit on them for 30 minutes and then get a bite. If you missed one cast, you didn’t get the bite and we would have lost the tournament. It was so important to make sure you covered everything.”

It actually snowed some on the final day, and one key adjustment the pair made was to mix in the jig more, after relying heavily on moving baits on the first day. Today, the jig accounted for two of their best fish.

“I caught some decent fish in practice on a jig when it was cold,” said Proffitt. “Earlier I probably could have caught them on a jig, but there was no need. There was no need in slowing down and throwing something that was going to get hung in the rocks all the time. But today, on our first spot, the first bait I picked up was that jig, and I caught [a short] on my second cast.”

Fishing fewer than 20 places each day, and no long stretches of bank, the pair were very efficient, even if that didn’t result in big numbers of fish. In fact, after catching five keepers on Day 1, four on Day 2 and six on Day 3, they really needed about every one of ‘em. The duo also made a few very clutch decisions.

“One of those five keepers on Day 1, we were running out of the creek, leaving, and I happened to look down on the map and I saw behind us a bank that looked like it transitioned and went back into a little spawning cove like the other stuff we were fishing,” said Proffitt. “I spun a 180, I just cut it, we went over there and he (Ragsdale) caught a 3 ½-pounder out of it. He doesn’t catch that, and it’s a whole different tournament.”

On the final day, they caught a keeper off a place they first found in their only other experience on Gibson in a Southern Conference event back in July of 2020 when they finished 36th out of 63.

“We saw it, and thought that looked cool, but we didn’t use it in July,” said Ragsdale. “But then today, when we were running, we ran over there and fished it and ended up catching our kicker there.”

One bite went a long way for a lot of teams this week, but after three days, the consistency and fine-tuned adjustments from Proffitt and Ragsdale got the job done at the best possible time.