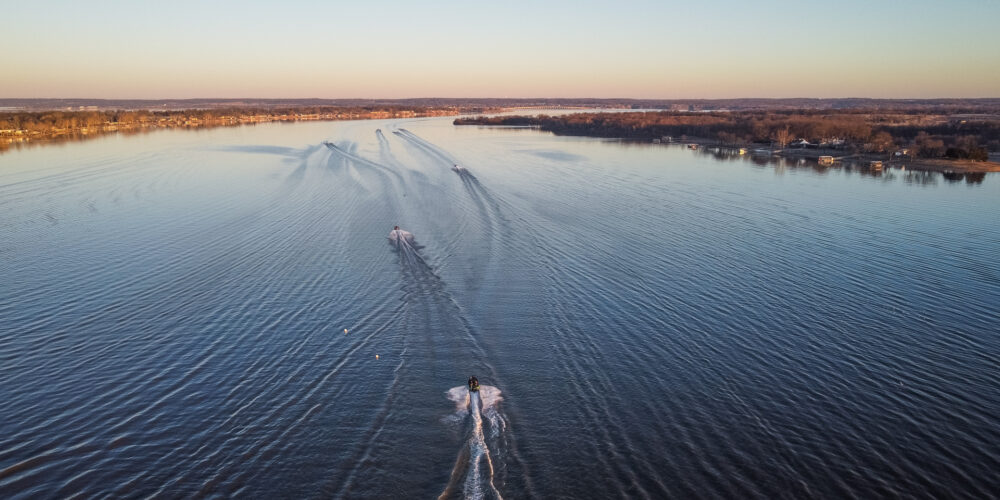 A crisp Oklahoma morning greeted the 150 teams competing in the 2021 Abu Garcia College Fishing presented by YETI National Championship presented by Lowrance this week on Grand Lake. While March is usually a phenomenal time to splash a boat in on Grand, the recent record-setting cold snap that rolled across the country has left fishing tougher than usual.

Still, after three days of competition, the winning team is going to walk away with a Phoenix 518 Pro bass boat powered by a 115-horsepower Mercury outboard worth $33,500, plus entry into the 2021 Toyota Series Championship where they will compete as pros for a top prize of up to $235,000. Oh, and of course they get the bragging rights that go along with holding the title of National Champion.

Grand is situated in northeast Oklahoma among the foothills of the Ozarks. The impoundment was created in 1940 when the Pensacola Dam was finished. The 46,500-acre reservoir is the largest impoundment on the Neosho River (which is also called the Grand River, particularly below Grand Lake), and the lake is a bit more than an hour or so from Tulsa.

Though technically in the Ozarks, the lake is a bit of a combo between a prairie lake and a true Ozark impoundment. It’s flatter and shallower than Beaver Lake and Table Rock, but you can still mistake large sections of it for the Ozarks very easily.

The predominant structure on the lake is rock. Aside from various types of rock, docks and wood found in the form of flooded bushes, laydowns and brush piles are found fairly commonly throughout the lake.

The split nature of the lake is shared by its tributaries to an extent. Flowing from Kansas in the north, the Neosho River is the primary tributary. Meeting up with it near the top of the lake, the Spring River also flows from Kansas and the western edge of Missouri. The part of the lake fed primarily by the Neosho is notably dirtier, and the upper reaches of it feature a lot of permanently shallow water strewn with laydowns.

Entering the lake to the north of Sailboat Bridge, the Elk River is the clearest-running large tributary of Grand and flows from the east out of the Missouri Ozarks. The Elk has a reputation as a big tournament producer, and many lake tournaments have been won in it. However, you can say that about many sections of Grand. Because of Elk’s proximity to takeoff and the color of the water, you can expect it to get plenty of pressure this week.

It’s no surprise that Grand Lake isn’t its usual self this week considering a substantial part of the lake was covered in ice just two weeks ago. With things thawing out, the lake has been steadily rising and currently sits barely above conservation pool (742 feet). The influx of water has led to dirtier conditions throughout the lake than usual. Add in the fact that water temps are well below average, and it’s likely Grand will be a tough egg to crack this week.

Hailing from Drury University in nearby Springfield, Missouri, Cole Breeden and Cameron Smith don’t have much experience on Grand, but they know Ozark fisheries well. After two days of practice and a little bit of exploring in pre-practice, the duo agrees that fishing is going to be tough this week.

“On the main lake the water is pretty dirty,” says Breeden. “There’s a lot of creeks though that flow clear, and the further you go back in those creeks, the clearer they get. The water temp right now varies anywhere from 38 degrees all the way up to 54 degrees. Some of our teammates have seen 58 degrees, so there’s just about every clarity and water temp out there that you could think of this time of year.”

Because of the cold water, there’s also a shad kill going on that could be one reason keeper bites have been hard to come by.

“We haven’t seen many dead shad in the areas we’ve been fishing, but we saw some today around the takeoff area,” Smith says.

“It just depends on where you’re at,” Breeden adds. “Some places we haven’t seen many, but it doesn’t mean there aren’t shad on the bottom. Overall, there’s definitely a decent shad kill going on. On top of the ice that was down here, the shad kill is going to make things even more tough. Why would a bass go out of their way to chase your bait when they have a feast in front of them?”

This week should be fairly straightforward in terms of what teams employ on Grand to catch bass. A spinnerbait is one of the best tools to cover water and dissect docks, laydowns and rock on Grand, so expect to see plenty thrown. A jig is also another staple that will see plenty of water this week. You also can’t count out a balsa crankbait, jerkbait or a shaky head.

Probably the biggest factor and one of the best tools for catching cold water bass is an umbrella rig. There are plenty of areas where the water is too dirty to effectively fish one, but there’s also plenty of water for it to shine. The A-rig could be the major storyline of the event.

Ask nearly any team in the field and they’ll tell you Grand is a grind. But, with warm weather in the forecast things may take a turn for the better.

“I think the fishing will improve with the rising water temp,” says Smith. “We may not see the best fishing you can have on Grand, but we’ll see it improve. When you get that first big warming trend in the spring a lot of the biggest bass will move up.”

“There’s a possibility for a big wave of fish to move up not to spawn, but just to feed,” Breeden adds. “The next two days are supposed to be in the mid-60s and sunny, so a lot of big ones will move up and there could be a bank or pocket someone rolls up to and that suddenly has some big ones. The warm and sunny week will help things and with the shad kill having fish pull up shallow can be key to getting bit.”

While things may be tough, Grand is still chock-full of 3- to 5-pounders, so even getting only five or six bites a day could produce a solid bag.

“We’re on Grand in the spring, so you can catch a giant bag, but backing it up might be tough,” Breeden says. “We’ve been saying it’ll take 18 pounds a day to win.”

“Yeah, decent limits a few days and one fire day will do it,” says Smith.