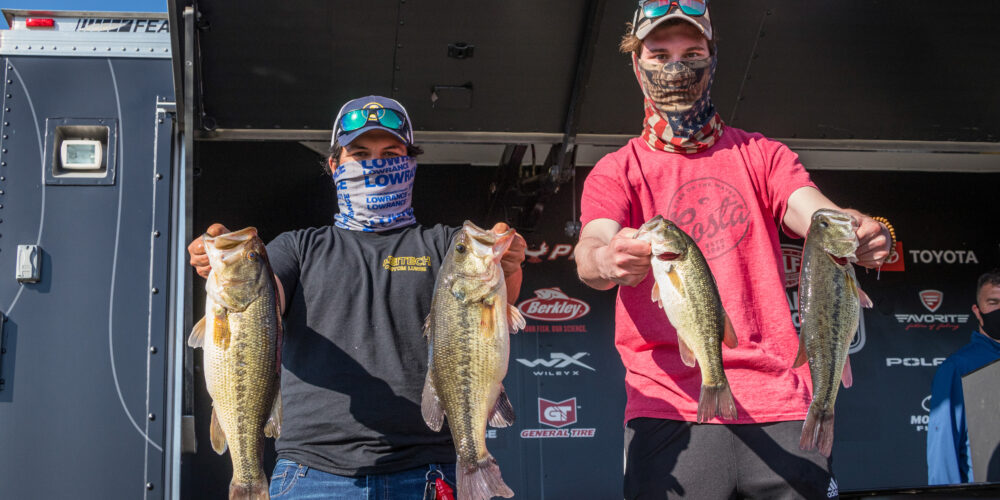 Zachary Potter and Alex Johnson dropped 17 pounds, 14 ounces for a 29-6 total on Day 2 of the of the Abu Garcia College Fishing presented by YETI National Championship on Grand Lake. Potter and Johnson started the day in ninth place and their bag was the biggest of the tournament so far by a wide margin. Heading into the final day, Potter and Johnson will have more than a 2-pound edge on the competition.

Fishing down the lake, the New Jersey duo have barely caught limits both days.

“Today and yesterday were both grinds,” says Johnson. “We got five bites yesterday and seven today. We’re just fishing slow. We’re fishing one small area and we know there are good ones in it. We’ve got two bite windows, one in the morning, one in the afternoon. It happened the same both days. We’ve just kinda got to sit around in the middle of the day; it’s a little mentally taxing, but we’re hanging in there”

The pair are essentially fishing one stretch of rocky bank with some scattered wood and they’re doing the majority of their damage with a jerkbait.

“We only caught one fish all of practice, and this spot is where we caught that fish,” adds Johnson. “I saw ‘em on my 2D, I knew there were more than one fish there, but that was the only spot I knew we could catch fish. Over two days, we’ve learned a lot more about that spot, so we’re starting to be able to break it down better.”

This event is the final college tournament for both anglers. Heading out as the lead boat on the final day, the pair will have a chance to end their careers with an exclamation point.

“We’re just going to grind it out tomorrow and hope for the best,” says Potter.

“We’re not getting a ton of bites, so it could be hit or miss,” says Johnson. “I know the right fish are in that area, if we keep our heads down and work, I think we should be able to get ‘em.”