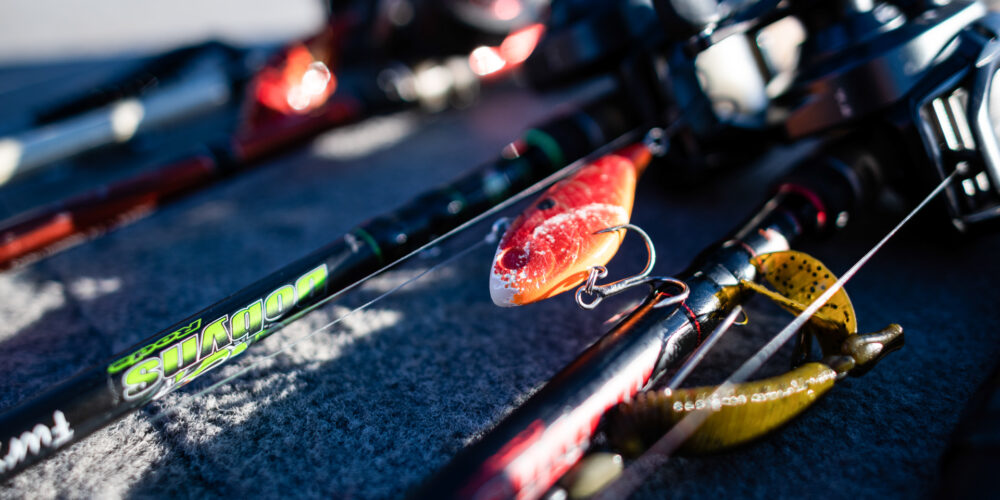 DAYTON, Tenn. – The Abu Garcia College Fishing Presented by YETI Open on Lake Chickamauga was an absolute grind for most everyone in the field. Rising water, mud and lots of current made for tough late-winter fishing on the legendary Tennessee River reservoir.

Still, one team got it done in a big way, and the others scratched together some good weights to lock up National Championship berths and paychecks.

1. The team of Hunter Fillmore and Dylan Fogarty from Bethel University blew out the rest of the field, winning by more than 14 pounds and catching over 20 pounds two days in a row. Targeting a patch of healthy eelgrass on the main river, the pair used a Jackall TN lipless and Z-Man/Evergreen ChatterBait Jack Hammer and a Queen Tackle Switch Blade Tungsten Bladed Jig in 1/2-ounce models. For the vibrating jigs, both anglers used baits with red skirts and a white Yamamoto Zako, which they dyed orange.

2. Finishing second, Conner Johnson and Jordan Nicely of Georgetown College used a pair of red lipless baits and a SPRO RkCrawler 55 for their weight. In the mornings, the duo fished their lipless baits in the back of a creek along a road bed with stumps. Later, they cranked shallow areas on the main river directly up- and down-current from bluffs.

3. In third, Reagan Nelson and Collin Reyes of Tarleton State-Stephenville fished current breaks and cleaner backwaters for their fish. A 1/2-ounce Z-Man/Evergreen ChatterBait Jack Hammer with Zoom Z-Craw Jr. was their go-to vibrating jig, which they fished in both scenarios. In the backwaters, they also cast a 5-inch weightless Yamamoto Senko in gooseberry.

4. The LSU duo of Bryan Bergeron and Heath Pinell worked a run-in in the back of a short pocket for all their weight. A spinnerbait, a Z-Man/Evergreen ChatterBait Jack Hammer with a Yamamoto Zako and a Strike King 1.5 squarebill all did work, but their best bait was a red Bandit 200.

5. Running up to the Watts Bar tailrace, Conner Giles and Christian Wright targeted smallmouth and might have rocked things if they’d been allowed more than two per day. Drifting a 100-yard stretch, they did their best work with a 2.8-inch Keitech Swing Impact FAT on a 5/16-ounce Strike King Baby Squadron Swimbait Head. They added some largemouth on a YUM YUMbrella Flash Mob Jr. with 3.3-inch Keitech Swing Impact FAT swimmers, a Strike King Red Eye Shad Tungsten 2 Tap and a Texas rig with a Strike King Rage Bug.

6. Tyler Hill and Bryant Marsh of Blue Mountain College went with a 3/4-ounce Z-Man Big Blade ChatterBait matched with a RaZor ShadZ and a BOOYAH One Knocker. They focused on grass on the back sides of main-river bars and fished their baits slowly to make sure they ticked the vegetation. They threw both baits on a 7-foot, 3-inch, medium-heavy Hammer Rod.

7. The second Bryan team in the Top 10, Mason Cizek and Rob Lindsey flipped reeds and wound a lipless for their fish. On the flipping side, they used 5/16-ounce Texas rigs with either a Zoom Z-Craw (blueberry) or a Missile Baits Baby D Bomb (green pumpkin). For their lipless baits, the pair went with a BOOYAH One Knocker and an XCalibur XR50.

8. Finishing eighth, Austin Aikins and Sean O’Brien of Bethel targeted current breaks at the beginning, but ended up looking for warmer, dirtier water with bait and wood cover and cattails as the event went on. Never limiting, every fish they caught was more than 3 pounds. For baits, they rolled with a 1/2-ounce BOOYAH Covert Spinnerbait and a XCalibur XR50 blank that was custom painted by teammate Cody Gregory.

9. Repping the University of Montevallo, Cade Holcomb and Grayson Morris did their damage with a 1/2-ounce Z-Man/Evergreen ChatterBait Jack Hammer and a Strike King Menace Grub. On Day 1, the pair caught all their weight on a current break formed by a boat-sized boulder on a point. On Day 2, with the boulder tapped out, they targeted cypress trees with reed clumps for their fish.

10. Lane Bailey and Justin Eggers put Catawba Valley Community College in the Top 10 with a trip up to Watts Bar to fish rocky secondary points. Their primary baits were a Riot Baits Reactor 1.5 and a 3/8-ounce Queen Tackle Tungsten Flipping Jig with a Strike King Menace Grub trailer.