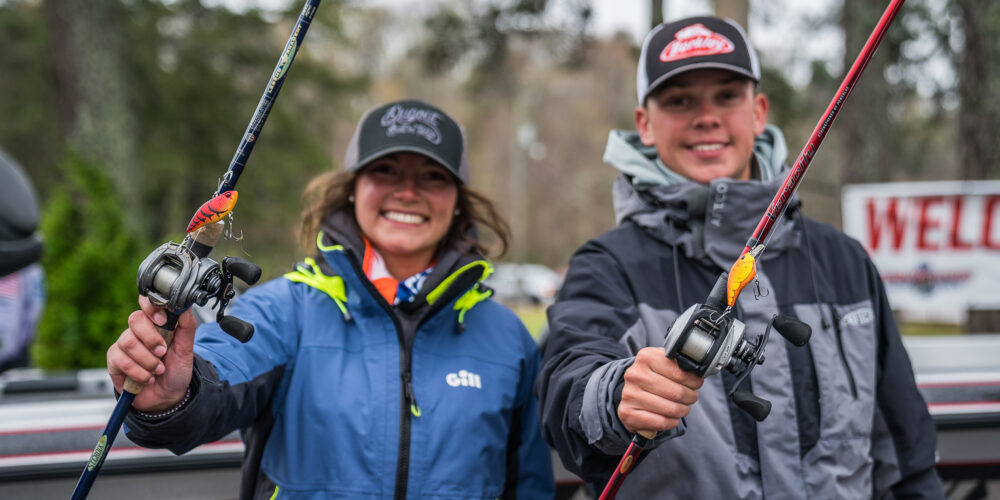 The  Abu Garcia College Fishing presented by YETI Open on Lake Chickamauga presented anglers with two dramatically different weather days and solid prespawn fishing on the Tennessee River. The East Texas Baptist University team of Cannon Bird and Jacob Keith took home a new boat thanks to a pair of vibrating jigs fished in hard-to-reach places and a variety of other Chickamauga staples contributed for the other top teams.

2. Bryan College’s top team of Conner DiMauro and Cole Sands know the lake inside out and led on Day 1. The Dayton duo ended up with a slew of baits on deck and actually weighed three species on the final day as proof of their unraveling pattern. Between them, the pair used a 6-inch Megabass Magdraft, a 5/8-ounce Yo-Zuri Rattl’n Vibe in matte craw and citrus shad, a ghost sexy shad-colored Yo-Zuri 3DB Series Jerkbait and, of course, a white Z-Man Evergreen ChatterBait Jack Hammer as well.

3. Robert Gee and Reed Noyes of the University of Tennessee had solid outings on both days fishing current below the Watts Bar dam. Weighing a pile of smallmouth, the Vols relied on True Bass Swimbaits Hollow Body Perfect Head swimmers on ¾-ounce heads. The best-producing color for the pair was Sexy Rexy.

5. The freshmen anglers of Emmanuel College mixed it up a bit. Dylan Akins and Chase Carey tossed a Sam Rayburn red craw-colored Strike King Red Eyed Shad for their keepers, but caught most of their bigger fish on a green pumpkin Zoom Z Craw.

“We tried a bunch of different colors, but we wound up having the most success in the regular green pumpkin color,” Akins says. “We didn’t get a lot of bites on the Z Craw, but we got two or three key bites each day, so that helped a lot with our bigger fish.”

7. Next up in the order of finish, Aaron Cherry and Chandler Holt of the University of Montevallo, which placed two teams in the Top 10. Cherry’s top choice overall was a Rapala DT 6 in demon. Holt went with a ½-ounce jig with a sapphire blue Zoom Super Chunk.

9. Caz Anderson and Lee Rose Koza of Carson Newman both went with a power approach. Anderson threw a Berkley Frittside 5 in a crawdad color. Koza chose a SPRO Aruku Shad with a red and orange belly.