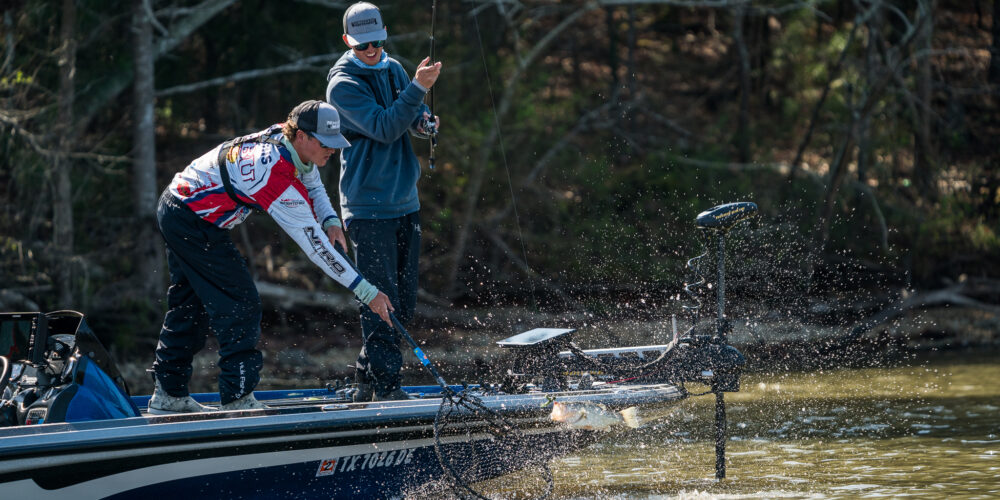 Day 1 of the Abu Garcia College Fishing presented by YETI Open was hardly the heavyweight battle that Lake Chickamauga can dish out, but it wasn’t without good fishing. With a full moon and plenty of current rolling through the lake, the conditions are great for the bass, if not for the anglers. In the afternoon on Day 1, anglers faced rough rides back to weigh-in when the wind got up. On Day 2, the challenge is likely to come in the form of rain, with more than an inch in the forecast for the final day of competition.

Leading the way, Cole Sands and Conner DiMauro of Bryan College set the pace with 23 pounds, 15 ounces. Behind them, some great collegiate talent is very much in the hunt.

Nick Montilino and Adam Puckett landed 23-2 for second and Puckett is no stranger to big time success. Back in 2019, Puckett and partner Blake Albertson won the National Championship on the Potomac River.

He and his partner fished upriver from takeoff.

Puckett says they decided to go north instead of south because of Montilino’s suggestion.

“He had fished it prior and there’s just a grass bed that grows there and it doesn’t die,” says Puckett. “It’s healthy grass.”

On Tuesday morning, they caught two there. They felt there were many more bass to be had, but they simply weren’t biting. The Murray State team was about to leave and go to Chester Frost at about 11:00 a.m. That’s when the wind kicked up, so they went back to the grass bed. Going back paid off.

Just like the team in front of them, Puckett and Montilino are not worried about Wednesday’s weather. Puckett believes they may have found a spot that will produce regardless of weather.

“It’s going to be nasty and when we found this spot and caught fish, it was Sunday morning when that front came through. It was just the tail end of it, but it was nasty,” says Puckett. “Today when we got there it was calm and sunny and they were not biting, so I think in this nasty weather they’ll get in that grass and I think we’ll be able to catch some.”

Late in the day, the Tennessee Volunteers made some noise. Robert Gee and Reed Noyes netted 20-9 for a third-place Day 1 finish.

Noyes says they had to push through the morning.

“We had a really slow start to the morning, but we had confidence in what we were doing,” says Noyes. “We just had to put our heads down and keep fishing. We stayed shallow and had to grind out five bites, but it paid off.”

The pair fished the lower end of the lake near Chester Frost Park. They were throwing mostly lipless crankbaits and Rapala DT 6 crankbaits.

Gee took notice of the very windy conditions and adapted.

The effort from the Vols was an exercise in patience and determination. Noyes said they didn’t get discouraged from the morning lull.

“It was a slow start to the morning but as the sun got higher, it got better.”

Blanton says Tuesday proved a day to trust their instincts.

“Honestly, we don’t really know about a pattern,” says Blanton. “It’s a place that we found in practice. We got one bite on it and didn’t really go back. But we went in there this morning and we got a bite in one area. We were like, ‘Okay maybe there’s some more fish in this area.”

Mazur went with a lipless crankbait all day. The partners caught their first four bass between 10:00 and 10:30 a.m. but caught most of their weight after noon.

Keith says they did some “junk fishing” and “threw a little bit of everything,” mainly square-bill crankbaits and lipless crankbaits. Like the fourth-place team from Missouri Western, Keith and Bird had no set pattern. Keith says they, “just kind of picked areas apart.”

It may not have been textbook, but it certainly worked.

“I mean we fished docks, rocks, points and we found one little spot that had a touch of grass in it,” says Keith. “It was stop here and pick one up, stop there and pick two up. It was kind of a tough day all the way around.”

Bird says with the choppy water and wind, they simply had to take what Lake Chickamauga was giving. Turns out, she gave enough for a top-five start.