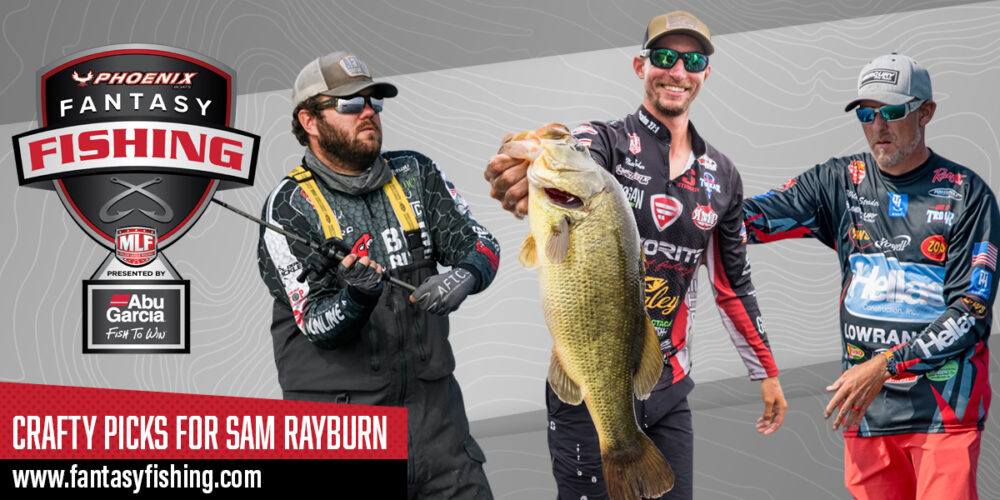 As someone who never stopped playing Fantasy Fishing, I’m thrilled by the reintroduction of FantasyFishing.com and stoked to get to pick a team for the Tackle Warehouse Pro Circuit season opener at Sam Rayburn. With two Flights to pick out of, I found I had more options than I wanted, which means if things go poorly, I guess it’s all my fault. Still, I went ahead and took a stab at some picks – so, let’s dive right in and explain along the way.

Taking the reigning Angler of the Year feels like a bit of a no-brainer to me. If I had to choose between Neal and Dicky Newberry or something like that, I might have trouble, but here it’s easy for me. I don’t really expect a gangbuster offshore tournament, but if that happens, Neal will be ready for the shootout. If it’s a grinder in the grass, then you can’t count him out either. Picking up something that vibrates and covering water puts Neal in the Top 20 almost every time he’s in Florida, and I think that same deal will work for him at Rayburn.

I consider Dakota Ebare to be one of the bigger gambles in the field. Though he’s a local with a lot of time on the lake, Ebare isn’t one to hit singles on Big Sam. Odds are, he’ll be shooting big out deep, which can lead to anywhere from 8 pounds to 40 pounds. His history on Rayburn is spotty, with a day spent leading a Toyota Series event and his worst finish ever back in 2020, when he caught one fish on Day 1 of the event.

If it all clicks, everyone going with the hot local will look smart, but there’s plenty of history to say it won’t.

It doesn’t really make a ton of sense, but Ron Nelson just seems to get Rayburn. His first event at the big lake in 2019 was also the start of his rookie season, and he bombed on Day 1 and rallied on Day 2. The next year, he made the Top 10. Great in grass and pretty adept with a C-rig offshore, I fully expect Nelson to turn in a consistent performance one way or another.

Picking an angler below 40th in points might turn out to be a bit tricky later in the season, but for now, it is absolutely cake. Nick LeBrun is a hammer on Rayburn and really hasn’t ever disappointed in big competition on the lake. Likely to stay fairly shallow, I think LeBrun is far less likely to bomb than Ebare, which I like, considering some of the other gambles and semi-gambles on my roster.

In 2014, Mark Rose finished runner-up to Bryan Thrift on Rayburn and did it almost entirely offshore. He got lucky with a big bite, but if you’re as good offshore as Rose is, and you spend enough time on Rayburn, that’s not really getting lucky. I wish Rose had been in the previous two FLW Tour and Pro Circuit events on Rayburn, but really, he seems perfectly fitted to the lake. Plenty of other Tennessee River anglers have had consistent success there, and Rose’s back-to-back wins in 2017 showed just how good he is at figuring out a lake in the prespawn and winter, not just in the summer on the ledges.

The last time at Rayburn was a bit of a train wreck for Cole Floyd, but I still think he’s well-suited to the fishery. Excellent winding in grass or offshore, he’s also a dynamic shallow angler who has a lot of his dad in him. Assuming Floyd has his feet under him a little more than he did his rookie season, I could see him grinding out something weird and shallow (think Tommy Dickerson in 2020) or killing it deep or in the grass.

Part of my team-building strategy is to assume that the fishing won’t be great and that the offshore bite will be tough. So, if shallow is the name of the game, I have a hard time passing up Wesley Strader. Strader’s Elite Series win at Kentucky Lake sticks in my mind, and I know he can make a stingy fishery look pretty good with ease.

In the two times he’s fished Rayburn, Matt Becker has never really had a bad tournament. If you ask him, he’ll predict a zero, but last year’s Lake Murray champ has got to be burning for some revenge. Missing the Tackle Warehouse TITLE isn’t something he’s used to, and I expect Becker to get the ball rolling early in 2022.

The man is a maestro with a Rat-L-Trap and he has more Top 10s with MLF on Sam Rayburn than anyone else. I’m not gonna overthink it. Pick Dicky Newberry.

The only rookie I’m running out there, River Lee has a ton of experience in East Texas and ought to do just fine. He’s also only sort of a rookie. Though the Tackle Warehouse Pro Circuit is the biggest thing he’s fished so far, he fished a full season of the National Professional Fishing League in 2021 and got to experience high-stakes competition around the country.

The main difference between MLF Fantasy Fishing and other Fantasy Fishing styles I’ve played is that the pools to pick from are a lot bigger and weight is the determining factor, not place. I’m pretty far from an analytical fantasy player when it comes to fishing, so I’d welcome someone actually good at math on this, but it seems to me that making the Day-3 cut is going to be huge. That extra 10 to 14 points will go a long way, and make the difference between 55th and 45th pretty gigantic.

The field is obviously good enough that some really good anglers are going to miss the cut, but I feel like Lee and Ebare are the two biggest gambles I took. Not that the format forced me to pick anyone I didn’t want to, but I tried to consider consistency as often as I could. Becker hasn’t really been that guy of late, but I think he’ll come back. LeBrun isn’t a lock outside of Texas, but he’s cash money on Big Sam.

A Couple of Misses

When you can only pick a few anglers, you’re going to leave some folks on the bench. In this case, I feel pretty sure that I’ll come to regret not starting Skeet Reese, John Cox and Spencer Shuffield. Reese has been on such a roll (in five-bass derbies and otherwise) that he seems as inevitable as anyone these days. Cox is a previous winner and honestly should be pretty unbeatable if shallow is the way to go. For Shuffield, I’m banking on a return to form and the fact that he’s very skilled at many styles of fishing. I think he can contend in a lipless derby, and I think he could find something with LiveScope that not everyone is on.

Other pros really worth considering are Terry Bolton, Tommy Dickerson and Dylan Hays. All of them have good track records in Texas, and I can totally buy any of them making a cut fishing a couple of ways. For Dickerson, I wouldn’t bat an eye if he fished three days throwing a lipless or pitching to bushes. For Bolton, I could see him dragging and cranking deep or grinding a blade shallow. The same can be said for Hays, and I love that he’s one of the guys that doesn’t put his rods down in the fall.