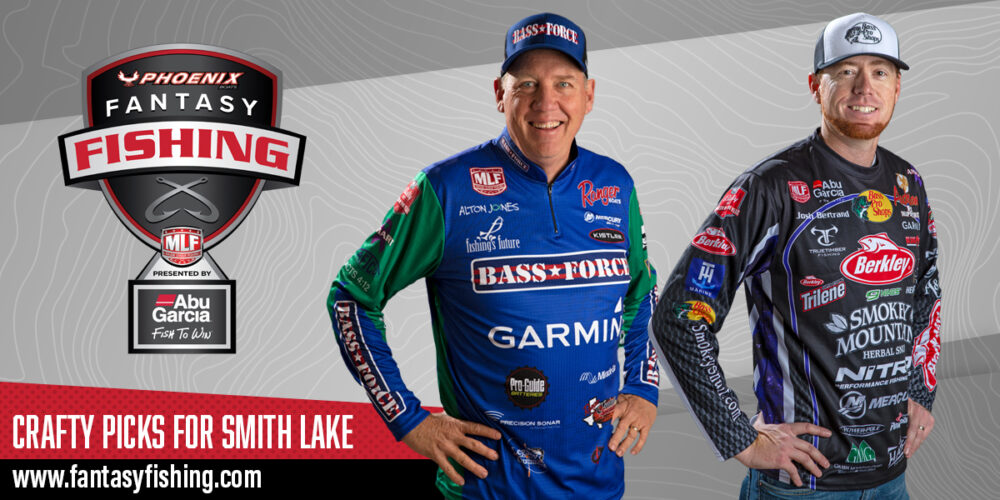 Alton Jones and Josh Bertrand two Bass Pro Tour pros who also happen to be avid fantasy sports players. They’re no slouches at picking their fantasy fishing teams, and – oh by the way – they have the definition of “insider” knowledge about Smith Lake as we head into Favorite Fishing Stage Two Presented by Mercury.

We asked these two FantasyFishing.com insiders to share some crafty picks for Stage Three on Smith Lake, here’s what they told us.

My strategy is to really go for either the local guys or the guys that are good at techniques that you know are going to play. That’s a tried-and-true formula that has given me some success over the years, and I’m sure it’s going to pay off again at Smith Lake.

You can’t go wrong with picking one of the Lee brothers – Matt or Jordan. Jordan is off to a great start this season and he’s fourth in the Angler of the Year standings. You’re required to pick an angler below 40th in the AOY standings for each group, and Matt Lee is that guy for me in Group B. His local knowledge will for sure play this week.

Some other local guys I have my eyes on – Jesse Wiggins and Justin Lucas. Lucas is a steal for Group A, as he’s 42nd in AOY points coming into Stage Three.

In terms of guys who’s specialties play well in this kind of environment – Cody Meyer and Mike McClelland. Both of those guys are good finesse fishermen in their own rights. I think if you’re looking to pick some guys that may help you stick out from the rest of the field, I would go with those two for sure.

A wild card – Bobby Lane. We have really high water this week and it’s really muddied up quite a bit. He loves to pick up a Berkley Frittside Crankbait in the colder months. I wouldn’t be surprised at all if Bobby does well in this one.

I’m going to agree with Josh – as I’m sure a lot of people will – that you can’t go wrong picking a couple of local hammers. Jordan Lee and Jesse Wiggins are two guys that I for sure have on my team. Lee continues to be one of the best anglers in this group of 80 pros and Wiggins has the ability to catch a bunch of spotted bass on Smith Lake.

My next pick may seem like I’m playing favorites but it’s also a pick based on logic. My son, Alton Jones Jr., is an angler I need on my roster until he starts to slow down. He’s coming off the first major win of his career on Lake Fork just a few days ago and has proven that he can figure out how to catch them on just about any fishery MLF throws at him. He’s one of the hottest anglers on the planet right now and I expect him to keep it up in Alabama.

Another guy I’m adding to my roster is Ott DeFoe. The man is a master at covering water and fishing during the prespawn. He’s a proven winner in this league even though he’s off to a slower start than he’s used to this season. However, that’s good news for the people picking him, because you can’t find a much better angler who’s currently sitting below the Top 40 in AOY standings.

Also, throw Jacob Wheeler into the mix because, why not? He can’t seem to be stopped right now and is almost a lock to compete for a spot inside the Top 10 no matter where he goes.

The Favorite Fishing Stage Three Presented by Mercury begins on Wednesday, March 2. Picks must be completed on FantasyFishing.com by no later than 7 a.m. CT on Wednesday.