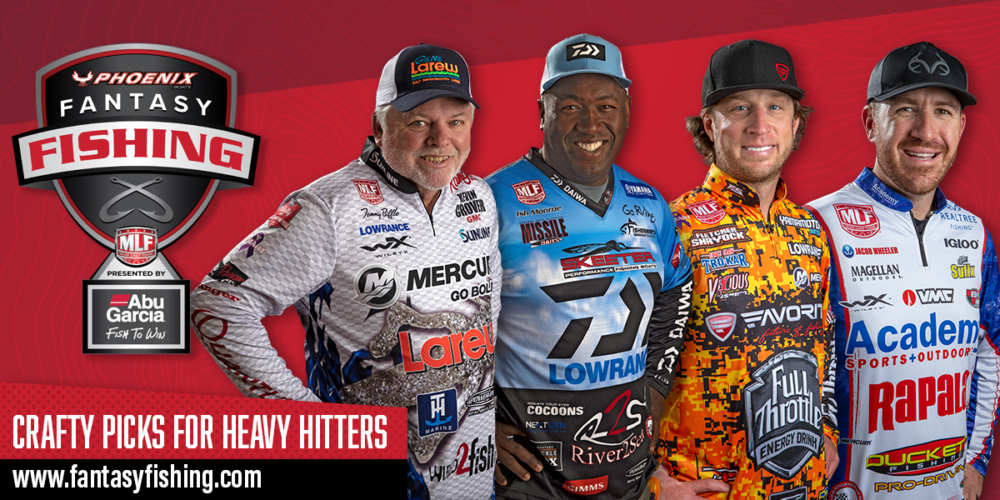 TYLER, Texas – It’s time to make your fantasy picks for General Tire Heavy Hitters Presented by Bass Pro Shops at Lake Palestine in Texas. This East Texas fishery is traditionally a producer of big bass, and you can expect to see plenty of them as the 32-angler field begins fishing on Saturday, April 9.

With such a small field, picking 10 is both easy and difficult, if that makes sense. Odds are good that many fantasy players will have anglers reach the final day, but how many members of your team fish in the Championship Round will likely determine your utmost success at fantasy.

As a senior writer for MajorLeagueFishing.com, I pay close attention to statistics, angler’s styles and fisheries. My picks this season have me sitting at No. 56 overall in Bass Pro Tour Fantasy Fishing heading into Heavy Hitters. I’ve continued to climb the ranks each event with what I consider safe picks: I tend to pick the sport’s biggest superstars, and I analyze anglers’ fishing styles and how they fit the particular tournament site.

Here’s some insight into my thinking for my picks for this event.

The Obvious and Not So Obvious

I’m sticking with my “APW” philosophy: Always Picking Wheeler. Jacob Wheeler has finished in the Top 10 in every event this year and shows no signs of slowing down. Plus, since everyone else will likely pick him, it won’t hurt you if he somehow doesn’t fare well at Heavy Hitters.

I wanted to go with Jordan Lee as Alton Jones did, but I don’t feel it for this one. Even though Lee is leading the Bally Bet Angler of the Year race, Lake Palestine doesn’t immediately seem to fit his style.

My two other obvious picks here are Michael Neal (who catches them everywhere right now) and Bryan Thrift, who finished second and fifth in the two previous Heavy Hitters events in 2020 and 2021. You can’t go wrong with either of these two guys and they rarely have bad events.

My other pick is a wildcard that could help gain some points as he likely won’t be picked by everyone: Tommy Biffle. The Oklahoma pro was eighth in Heavy Hitters standings, so he obviously catches big ones and you know he’ll be right at home flipping and pitching the abundant wood cover in Palestine. Plus, he’s fishing well this year and sitting in 29th in the AOY race after three events.

This one’s a no-brainer, but anglers with reputations and fishing styles geared toward big fish should be on your team. The REDCREST 2022 Presented by Costa champion immediately comes to mind, and with a nickname like “Big Fish” Bobby Lane, he’s undoubtedly going to be picked by a lot of fantasy managers.

Alton picked him as one to watch, but I’ll keep him off my team this time. I believe the extra media attention and responsibilities from that win may take him off of his game a little this week.

Ish Monroe is another who comes to mind, and I’ll have him on my team. He’s skilled with various big bass techniques and made a Top 10 at last year’s Heavy Hitters. His AOY rankings have him as one of the required picks with an angler below 40th in the standings, making him an even easier choice here.

Fletcher Shryock is another solid pick: he’s sitting below the 40th line so he would count as one of your required picks below that mark, but he’s in the same group as Monroe. I’m still picking him based on his fishing style and penchant for catching big ones. Shryock’s track record of taking home Berkley Big Bass awards is uncanny, plus he finished in the Top 10 at Heavy Hitters last year.

Make your picks for Phoenix Fantasy Fishing Presented by Abu Garcia from now until Saturday, April 9, at 7:30 a.m. EDT. Go to FantasyFishing.com to compete against me, Tyler Brinks, and thousands of others all season long.