FANTASYFISHING.COM INSIDER: Top Harris Chain Picks to Get Your Team a Win 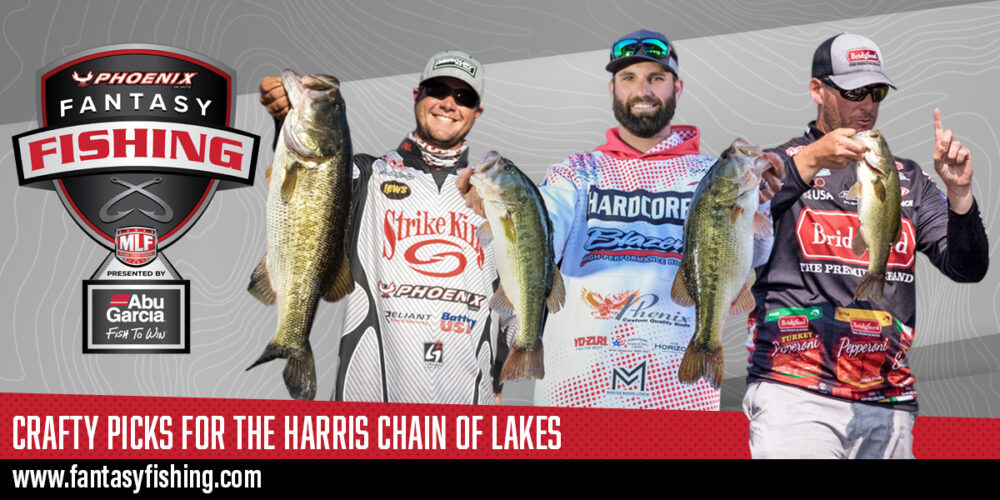 It’s been a while since the opener at Sam Rayburn, which naturally means my fantasy squad for the Tackle Warehouse Pro Circuit Presented by Fuel Me event at the Harris Chain has been highly polished. Per my style, I’ll probably mess with it again after registration, which worked out with my Dylan Hays addition at Rayburn, but hasn’t historically been super smart.

Anyhow, here’s who’s on the squad for this go-round, with some theory on the fishery en route.

Honestly, not a slam dunk in Florida, Spencer Shuffield’s best pro-level finish in a large field in Florida came at the Harris Chain back in 2020, when he finished 56th. Elsewhere, he’s been medium to bad at Okeechobee, and hasn’t got other Florida experience to stand on. Still, he makes the team for his offshore prowess. Lately, it seems like you need to fish off the bank on the Harris Chain, and there are few better with forward-facing sonar and a jerkbait than Shuffield.

The owner of a Top 10 in a B.A.S.S. Open on the Harris Chain, I’m picking my guy Nick Hatfield for sentimental reasons and because he could do well. A really good offshore and forward-facing sonar angler, Hatfield is well-suited to how many fish the Harris Chain these days. He’s also just really good at fishing and a super nice guy I’m rooting for.

There are a stunning 19 pros from Florida in the field this year (plus some that may as well be), so you probably won’t choose to put a Tennessee rookie on your team. But, I’m gonna go ahead and do it, because at its heart, Fantasy Fishing should be fun.

Maybe the best of both worlds when it comes to offshore or shallow, Josh Weaver may as well be from Florida with how his record looks in the Sunshine State. Great in hydrilla (he’s got experience out the wazoo on Lake Seminole), the Big Weave can also prowl the shallows with the best of ‘em. Coming off a good derby at Rayburn, I like Weaver for at least a Top 30 or so at the Harris Chain.

Had the 2020 stop at the Harris Chain gone one more day, I’m pretty convinced that Jimmy Washam would have outlasted Laramy Strickland for the W. As-is, he fits my theme of offshore prowess. Not that a jerkbait is the only thing that works in Florida, but Washam is a really good jerkbait angler and has a few tricks that I think could give him an edge on some of the more pressured offshore fish.

I considered building a team entirely out of non-Floridians, but that seems like a pretty stupid thing to do. So, in Flight 1, Jared McMillan got the nod. Definitely on the list of pros that could make the trek to Apopka and crush, the younger McMillan is one of a dozen incredible Florida options that really can’t be ignored.

You know the drill by now … John Hunter often has the offshore grass bite dialed and has done well at the Harris Chain a number of times. Also, one of these years he’s gonna qualify for the Tackle Warehouse TITLE, and this seems like a good time for it, so hopefully he’ll do well in Florida and keep the season rolling.

I know Brett Hite hasn’t exactly been a lock the last few years, but his performance in the Bass Pro Tour event last year at the Harris Chain was truly superlative and he’s amazing when it comes time to fish offshore grass. Generally, you give the man a ChatterBait and some hydrilla and look out. So, he’s on the team, and likely on a lot of others.

Harris Chain local Dustin Smith says the fish will be in all three stages of the spawn, and it’s really hard for me to stay away from John Cox in a Florida derby. Likely not the man if things are totally an offshore slugfest, Cox can still surprise on that end. If there are any beds at all, he’ll find them, and probably catch all the fish on them.

My Flight 1 was heavy on outsiders, and I’m looking for a little balance with Cox and Bobby Lane. Lane kinda snuck under the radar at Rayburn with a 27th place finish, but lately he’s been in about every Angler of the Year hunt he can find and generally pretty money at any event in his wheelhouse. From a pattern standpoint, he’s pretty dang versatile, and ought to be able to contend shallow with a big stick or out off the bank if need be.

Finishing fifth the last time the Pro Circuit hit the Harris Chain, Matt Stefan left Florida thinking he’d figured the fishery out. Ready to go for it offshore on grass and shells, Stefan is a meticulous angler who could set himself apart from others with a tweak or two. He’s also extremely consistent, and you’re very unlikely to get a really rough showing from him.

With a big field and only 10 spots, you’re going to leave some excellence on the bench. Still, there are three pros that really stick out to me as potential misses.

The first is Randall Tharp, who is back fishing five-bass derbies for events exactly like this. Pretty unstoppable with a flipping stick, Tharp is going to have a chance to win this event. In fact, I may just have convinced myself to change my team up.

Second is local Tim Frederick. He busted a 30-pound bag in a local tournament this winter, and really is pretty due for a huge showing on his home turf. The problem with Frederick is that he’s totally capable of throwing up a triple-digit finish at any time, less so on his home lake, but he’s still a much bigger gamble than Bryan Thrift on Lake Norman or Scott Dobson on St. Clair.

Finally, I don’t love leaving out Michael Neal. Still hot as a pistol, Neal is really good in Florida and has been the AOY leader for more than half a year at this point (if you want to get squirrely with math). This totally feels like one of those events where Neal will finish between ninth and 20th without too much fanfare and take home more points and another good payday.

Head to FantasyFishing.com to build your team before the start of the event on Sunday!