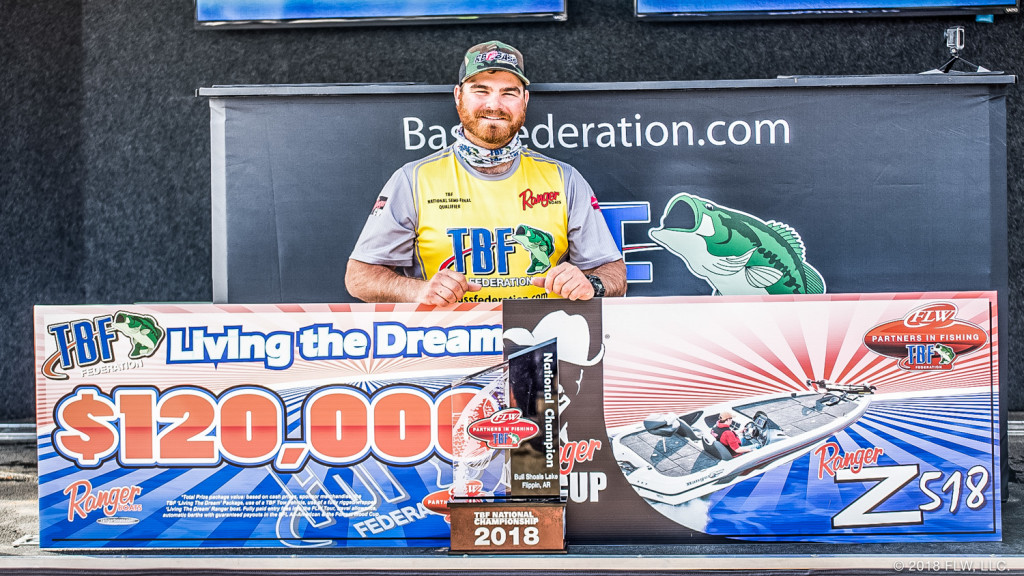 Undaunted by rollercoaster weather conditions, falling water levels and intense competition, California’s Austin Wilson turned three days of rock-solid springtime bass fishing into a $120,000 payday at The Bass Federation’s 2018 National Championship. In addition to the prize money, Wilson qualified for the 2018 Forrest Wood Cup, 2018 T-H Marine FLW Bass Fishing League All-American and the Living the Dream package that includes entry into the 2019 FLW Tour, with an expense stipend and use of a wrapped Ranger bass boat.

Held April 12-14 on Bull Shoals out of Flippin, Ark., the championship event featured an elite field of 54 boaters and 54 co-anglers from across the continent who qualified at 22 district competitions in the TBF’s National Semi-Finals system.

Thanks to the success of that recently adopted qualifying format, the field competed for an all-time record payout of nearly $300,000 in cash and prizes.

“Anglers practiced in their own boats Monday and Tuesday, then transferred their gear to brand-new Evinrude-powered Ranger boats for the final day of practice,” explains TBF President and CEO Robert Cartlidge. “Everyone fished out of these state-of-the-art Rangers on Thursday and Friday, after which the field was cut to the top boater and co-angler from each of the TBF’s seven divisions for Saturday’s final round.”

Wilson’s drive to the championship began with serious research from his home in Citrus Heights, Calif., just outside Sacramento.

“As soon as I found we were fishing Bull Shoals, I spent as much time as possible on Google Earth, dissecting the lake and getting an idea where I thought the bass would position to move in and spawn,” he says.

Wilson’s home waters include the California Delta, plus Folsom and Clear lakes, and although his favorite tactics are frogging and flipping, he’s a firm believer in versatility.

“I don’t like to put myself in any one category,” he says. “My weakness is cranking, but I still caught a lot of my fish this week on crankbaits.”

In practice, he fished the lake stem to stern and fished new water each day.

Wilson started the championship with a five-fish day-one limit weighing 14 pounds, 2 ounces. The catch included a pair of largemouths that hit a compact Picasso umbrella rig near a bridge located 25 minutes from takeoff at the Bull Shoals Boat Dock, and a trio of smallies taken barely a long cast from the ramp.

“I got the smallmouths on a Norman Deep Little N in reverse green craw,” he says. “I was fishing chunk rock on a secondary point in 5 to 10 feet of water.” 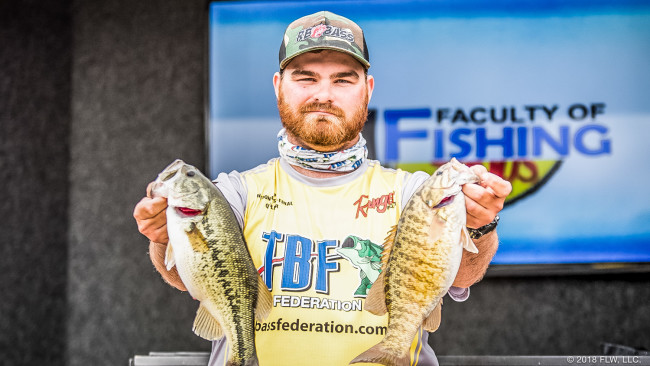 The weight put him atop the Southwest Division and within striking distance of overall leader Cody Huddleston of West Virginia, who brought 15 pounds, 9 ounces to the scale.

As he idled onto Bull Shoals the second morning, Wilson was in a dead heat with Kentucky’s B.J. Nelson, who was representing the Southern Division. Wilson followed a similar game plan. Although the bridge failed to produce, a mix of umbrella rigs and crankbaits yielded all the keepers.

As fate would have it, both anglers turned in identical limits again on day two. Each weighed 13 pounds, 9 ounces to lead his division and the entire field with 27 pounds, 11 ounces.

Wilson stuck to the same game plan on day three. Again, the bridge was a bust. But his two-pronged crankbait and umbrella rig program yielded a respectable limit in 10 feet of water on secondary points near the weigh-in area.

“I didn’t think I had enough to win it,” he admits.

The 12-pound, 9-ounce limit was enough for a 40-pound, 4-ounce total that put him more than 3 pounds ahead of his closest rival.

“I’m ecstatic,” Wilson said after claiming the crown. “I’ve been fishing as long as I can remember, and ever since I was about 16 I knew this is what I wanted to do with my life. I’m thankful TBF offers an opportunity like this.”

In fact, Wilson became interested in TBF after seeing fellow Californian Mark Daniels Jr. win the TBF championship and parlay the Living the Dream package into a professional bass fishing career. He hopes to do likewise with his shot at the FLW Tour.

As icing on the cake, Wilson was awarded a brand-new Ranger Z518 for being the event’s top Ranger Cup-qualified boater. 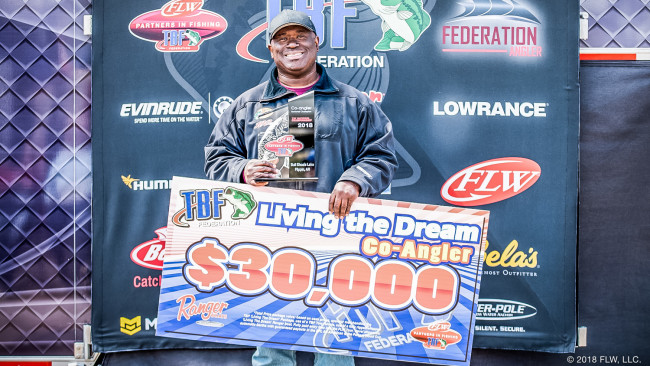 On the co-angler side of the event, Missouri’s Ray Blash won the Central Division and the overall co-angler title with 10 bass for a 27-pound, 12-ounce total. Blash sacked 6 pounds, 11 ounces on day one, boated the field’s heaviest catch on day two with a 16-pound, 3-ounce limit, and finished with 4 pounds, 14 ounces on day three.

Blash received a $30,000 “Living the Dream” prize package with fully paid entry fees into the Costa FLW Series division of his choice. Vermont’s Scott McKay earned a $5,000 cash award for being the highest-placing Ranger Cup-qualified co-angler.

The top boater and co-angler in each TBF division at the championship qualified to fish the 2018 BFL All-American. The list of qualifiers follows:

Coverage of the TBF National Championship was streamed live daily on bassfederation.com and will be broadcast nationally in high definition on “Federation Angler,” which airs on the Pursuit Channel.

The Bass Federation is a proud partner in fishing with FLW, which helps support this annual event along with other industry-leading TBF sponsors, including Bass Pro Shops, Ranger Boats, Evinrude, Faculty of Fishing, Cabela’s, Humminbird, Minn Kota, Berkley, Lowrance and Power-Pole.