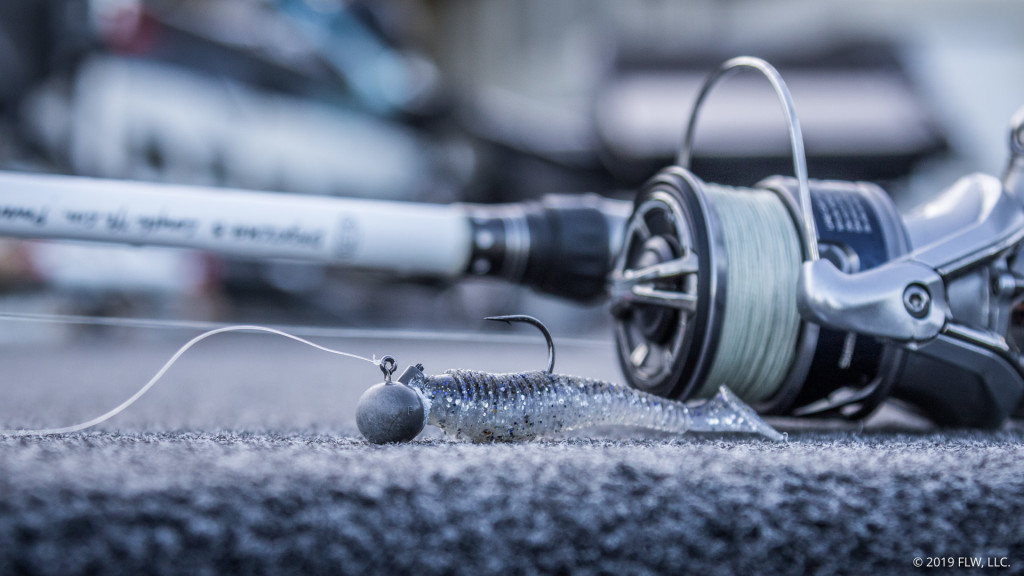 Wintertime and late fall fishing can be super fun, especially up north, when smallmouths are often fat and fairly grouped up. However, it’s not the time of year when you want a ton of rods on deck, and having a confidence bait or two is a must. For Casey Smith, the go-to winter weapon is super simple: a little bitty swimbait on a jighead. 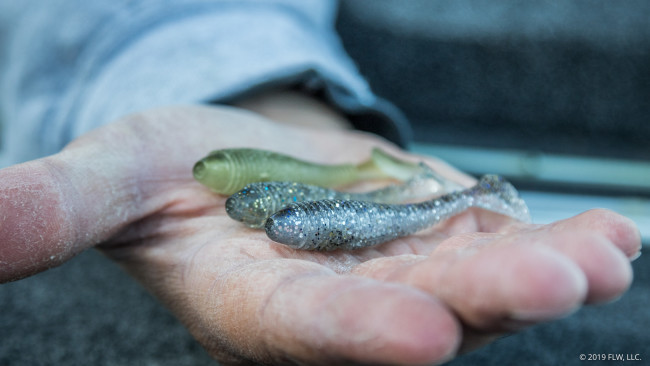 The lowdown on the bait

Smith’s go-to winter swimbait is the 2.8-inch Keitech Swing Impact FAT. Though the Keitech swimbait is probably the most popular in this size class, it isn’t alone anymore in the market. The Jackall Rhythm Wave, Berkley PowerBait Power Swimmer and a few others also come in a tiny size.

Smith typically mounts his swimbait on a 1/4- to 1/2-ounce tungsten football head from Keitech. His current favorite is an unreleased version of the Keitech Super Tungsten Football Head, usually with the weed guard clipped off. He particularly likes the hook because it’s stouter than some other finesse-style swimbait heads.

“I used to use just a ball head and little grubs, but the 2.8 is a much better swimmer and has more of a baitfish profile, and the football head can get in the rock and doesn’t hang up,” says Smith. “And, if you’re in a situation where you’re swimming it, that football head doesn’t impede it at all.”

For swimbait colors, he sticks with baitfish standards such as bluegill flash or alewife most of the time, but on Erie or somewhere with gobies or lots of perch he often turns to green pumpkin or a perch color.

The tackle is a pretty straightforward. Smith uses a 7-foot, 2-inch spinning rod in a medium-heavy power, 10- or 15-pound-test braid and an 8-pound-test flourocarbon leader.

“I want that backbone,” Smith says of his preference for a bit more rod than usual. “When you launch it way out there and it’s deep, you want to get a hook in them and make sure you’ve got ’em.” 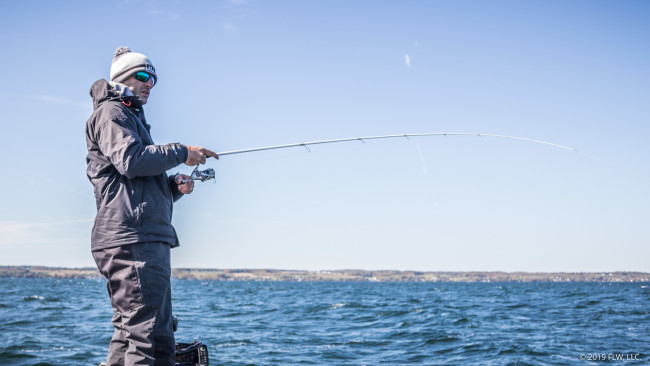 You can catch plenty of fish on bigger stuff when the water is warm (not that the 2.8 doesn’t do work then, too), but come winter, the little 2.8 can shine.

“No. 1 is that they eat it really well,” says Smith. “It’s just a little snack. Big baits on Ontario are a little bit of an exception. Everywhere else in the fall you want to downsize a little bit as the water gets super cold. For me it comes out super late, after the umbrella rig bite dies off, when they won’t come up as high in the water column to bite something. That’s when I put that on, and it gets to a point really late, when the water gets to about 42 degrees or under, that you’ve gotta put something right on the bottom and right in their face. That’s where that thing is perfect, too.”

One of the keys to the small swimmer is how efficient it is compared to other baits. With the proper size jighead, Smith can keep it right at the desired depth and cover quite a bit of water.

“I use it instead of a Ned or a drop-shot because you can cover more water,” says Smith. “The good thing about it is that you can cover the water, and if you see a fish on your graph beneath the boat you can drop it down and they’ll bite it just like they bite a drop-shot.”

The places he targets are pretty broad – deep flats, points, humps and really any place in 10 to 35 feet that might have a smallmouth or two.

“There are times when I want it swimming, when I don’t want it on the bottom,” says Smith. “That’s usually when I use the 1/4-ounce head, and I’ll just adjust my speed. There are a lot of times when I use the 1/4; if you’re fishing a deep flat with rock, or on a really steep point, you might throw across the end and really not be fishing the bottom. The heavy ones are more for when I want it closer or on the bottom.”

Wherever he’s fishing it, Smith says finding the right cadence is important. 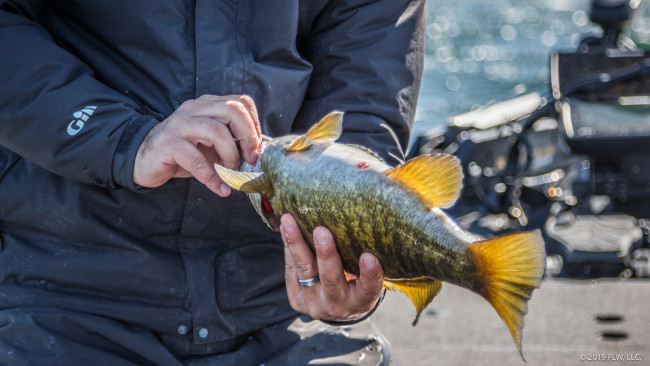 When the water gets cold and the weather gets bad it’s easy to head to the woods or the couch, but staying with it can have tremendous rewards. On the Great Lakes and most other Northern fisheries the smallmouth keep biting until ice makes it impossible to reach them. If you’ve got the right baits and know where to put them, you can really make some hay.