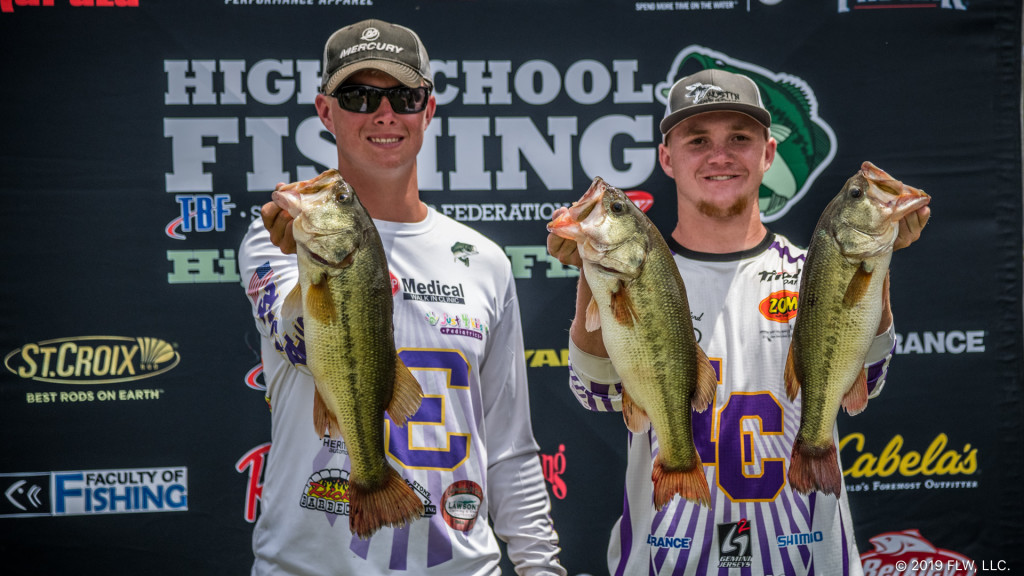 Time management played a big role for J.D. Bedford and Walker Brown of Alabama’s Lawrence County High School, who lead day one of the 2019 High School Fishing National Championship on Pickwick Lake with 13 pounds, 12 ounces. This event is being held in conjunction with the High School Fishing World Finals presented by The Bass Federation and FLW.

The leaders did most of their work on a ledge in 18 feet of water. Brown says he and Bedford threw a variety of baits in an effort to stand out from the rest of the boats crowding their periphery.

“We didn’t get a lot of bites, but when we did, it was usually a good one,” Brown says. “Probably the best bait that worked for us was a Texas-rigged big worm. Between that and a drop-shot is how we caught our fish.”

“We have more than one spot in a general area,” Bedford says. “We would run maybe two minutes down the river, and we’d be on our next spot. It’s all compact and close together, and that’s what we were looking for.

“We didn’t want to find a sack upriver and a sack downriver. We had an early boat number, so if we had fished a different area and didn’t catch them, we wouldn’t have had much time to catch on another area.”

Brown notes that he and Bedford found their key area around mid-morning and steadily culled up to their weight before cutting their day short.

“We actually should’ve cracked a bigger bag than we did, but we pulled off our fish about an hour and a half early,” Bedford says. “We knew we had a decent sack, so wanted to make sure we could get back in time.” 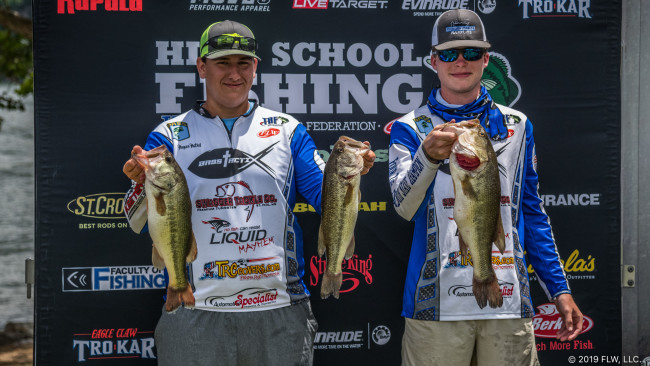 Trailing Bedford and Brown by 3 ounces are Dalton Smith and Hayze Hutzel of Northwest Rankin High School, who placed second with 13-9. The anglers split their day between shallow water and offshore patterns, with their biggest catch a 5-13.

“This morning it was cloudy, so we stayed shallow, got a couple fish and just filled out a limit,” Smith says. “When the sun got high, we went offshore because the fish were grouped up and easier to catch.

“When we went offshore, we looked for a good school and used big baits and big presentations to get a big bite. Up shallow, we were just looking for a limit. We just slowed down and took our time.” 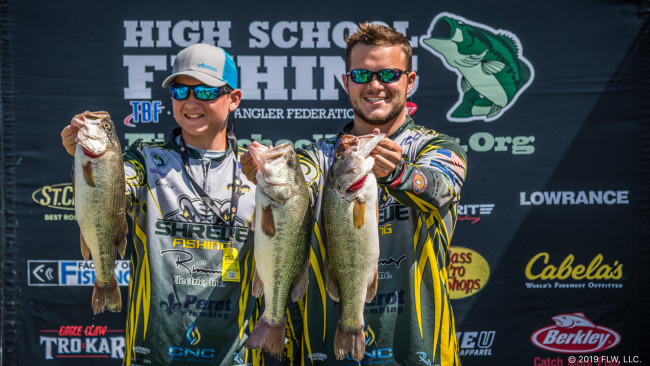 Bedford and Brown also hold the third-place spot in the World Finals, where Keegan Fort and Clayton Page lead the field with 14-05. Representing Louisiana’s Captain Shreve High School, Fort and Page started their day with a bang, complements of a 5-pound, 8-ounce largemouth that bit within the first 30 minutes.

“I flipped my bait up there, it sunk to the bottom, I turned around to talk, turned back around and picked up my line and it was moving,” Fort says. “I set the hook, and I couldn’t turn the fish. I made two or three cranks, got the fish up, and we could see it was big.

“Clayton looked like a deer in headlights, and I was like, ‘Where’s the net?’ He grabbed the net, we got the fish in the boat, and it was hugs and high-fives. That got our attitude going the right way.”

Honoring their Bayou State roots, Fort and Page stayed shallow all day and worked a grassy area in about 5 feet. 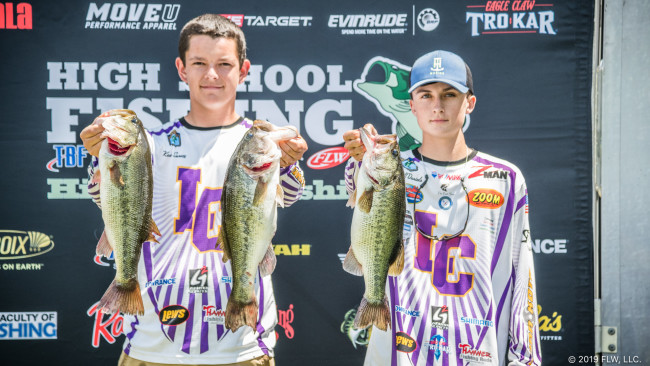 Bedford and Brown’s Lawrence County teammates Will Daniels and Kade Suratt caught 14-3 to place second in the world finals. They spent their morning hours targeting shallow rocks and grass with slower presentations before heading offshore.

Finesse baits were the key to their offshore game, which yielded a 5-pound, 2-ounce fish in the last hour of the day.

“We threw crankbaits and swimbaits, too, but we didn’t catch a fish on those,” Daniels says. “This lake has been so pressured lately that the finesse baits are key.” 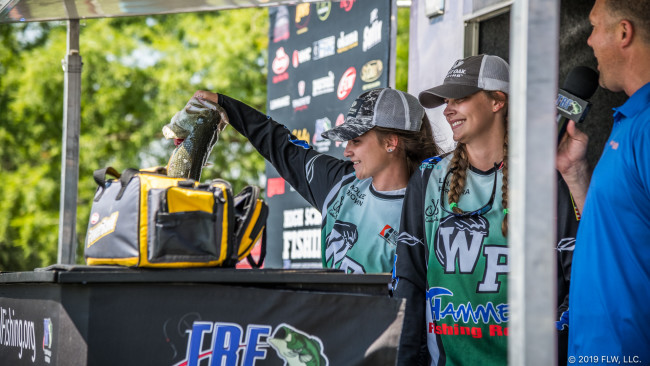 The only all-girl team in the High School Fishing National Championship is Mollie Brown and Lidia Portera of Mississippi’s West Point High School. They caught a 6-pound, 3-ounce largemouth that temporarily held the Big Bass lead and helped the duo place 28th. Noting that she caught the fish on a worm, Brown says she and Portera fished grass in 8 to 12 feet of water.

“You could tell that a lot of boats had been fishing that area, and they probably pushed the fish out where we were,” she says.

East Beauregard’s Dylan Guillory and Hayden Farmer would take over the Big Bass lead with their 6-10. In the World Finals, brothers Lain and Eli Peake of Bethlehem High School lead the Big Bass standings with the day’s largest fish – a 6-15. 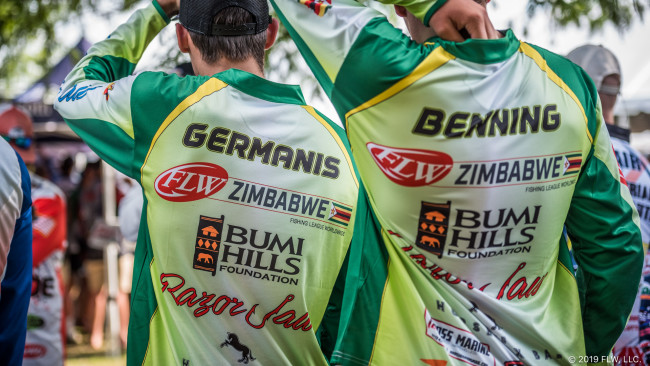 “A lot of the shallow bite is the same, but back home we don’t fish deep a lot,” Germanis says. “Spinnerbaits, jigs, a lot of the soft plastics – a lot of the baits are the same, just different colors.”

Benning says he and his partner commonly power-fish back home, so they employed similar tactics in their World Finals effort.

“The majority of our bites were coming on spinnerbaits,” he says. “We were just fishing the bank hard, covering water and trying to get that reaction strike.”

All participants are automatically entered in the World Finals’ invitational format, while National Championship competitors have qualified through SAF-sanctioned events. After two days of full-field competition for both events, the National Championship field is cut to the top 10 for day three, which is the final round of that tournament. The winner is determined by heaviest three-day cumulative weight on Friday.

Each member of the winning team receives a $5,000 scholarship to the school of his or her choice or a four-year $40,000 scholarship to Kentucky Christian University. All 10 finalists automatically advance to Saturday’s final round of the World Finals.

Teams are also competing for more than $2 million in scholarships and prizes at the World Finals.

The World Finals field is cut after two days to the top two teams from each state. Those anglers compete on Friday (when weights are zeroed) in the semi-final round.

Any teams that missed the cut in the National Championship or World Finals will compete on Friday in a separate second-chance round for a shot at making it back into the World Finals competition on Saturday.

Saturday’s field will consist of the 10 National Championship finalists, the top 10 teams from Friday’s World Finals semi-final round, and the next 10 teams (highest day-three weight) from the semi-final round and second-chance rounds combined. A Friday night party will include a Lucky Dog Last Chance Wildcard drawing for one team, not already qualified, to compete on day four – bringing the total to 31 teams. Weights are zeroed on the last day, and the World Finals winners are determined by the heaviest catch.