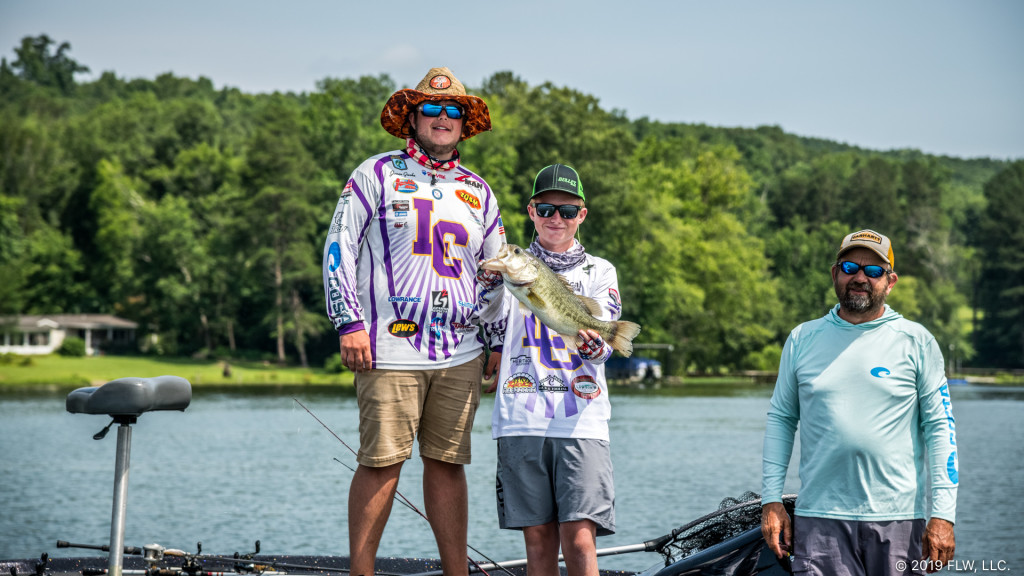 Timing is typically the key to success on most TVA reservoirs and Pickwick Lake seems to be dishing out the lessons during day three of the High School Fishing National Championship, held in conjunction with the 10th Annual High School Fishing World Finals.

Case in point, Colin McCullough and Justin Hamlin, who led Cedar Bluff High School into the National Championship’s final round. We saw them complete their limit by 7:30 a.m., but when we revisited them a few hours later, they had caught a couple more fish, but nothing that could push them past their early mark of approximately 11 pounds.

McCullough explained that days one and two had delivered big bites by this point, but they were waiting on the culmination of an approaching stimulus — big gizzard shad chasing schools of smaller threadfin shad. The anglers were fishing a ditch off the top end of Kroger Island and each day, the shad would move past the island, spill into the ditch and trigger the big fish to bite.

“We keep watching them get closer,” McCullough says of the shad’s progression. “But we can’t get bit until they reach this ditch. Normally, they’re blowing up the screen by 10.”

McCullough says the lack of wind and slower current were the likely limitations. He’s hopeful that one or both will turn in his team’s favor and get the big fish feeding.

Not far from Northlake Christian, the second-place team, North Augusta High School’s Dustin Williamson and Nathan Boatwright, also struck an early limit of 8-9 pounds, but after the early morning feed, they were left waiting for the next period of opportunity.

Starting the day in first place, North Lake Christian High School’s Christopher Capdeboscq and Sam Acosta boated an early limit and then moved around to other spots in search of upgrades.

Seventh place Easton Fothergill and Nick Dumke were sharing a spot with another boat when we found them. The neighboring boat stuck a fish and moments later, Fothergill caught the first of two fish in 5 minutes. Before and after, it was a lot of waiting for those feeding periods.

Late in the day, we passed World Finals competitors Taj White and Ethan Ryan of Phoenix High School who reported recent flurries where they caught one every other cast. This was the highlight of an otherwise slow morning.

We found several World Finals teams reporting slow to moderate days, but as of midday, the top producer was 11th place Jerren Gieske and Hunter Brewer of Lawrence County High School, who reported approximately 14 pounds, including a 5-pounder caught on camera.

The mostly sunny day was yielding to typical summer cloud cover by late morning, so perhaps this change in conditions, plus a potential increase in afternoon current production could turn the timing in someone’s favor.