HS Championship Will be a Frog-Fest 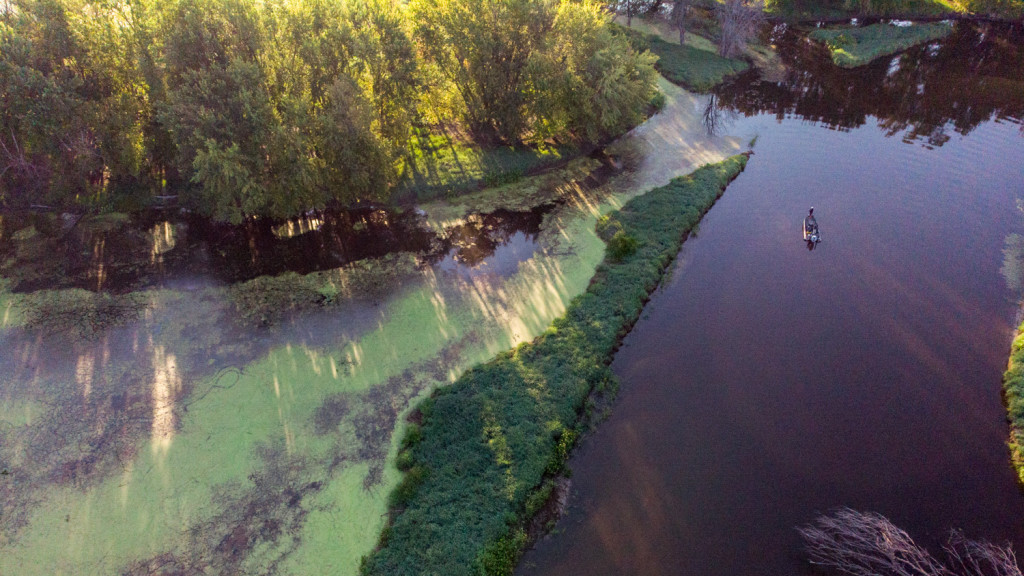 If you wanted to design the perfect frog-fishing tournament, you might host it at Guntersville or the Cal Delta, but you could also copy the agenda for the Student Angler Federation High School Fishing National Championship on the Mississippi River out of La Crosse, Wis.

The tournament goes down June 24-26 on one of the premier Northern tournament waters – the backwaters, channels and vast grass flats that comprise pools 7, 8 and 9 of the Mississippi River. According to Minnesotan Cade Laufenberg, who has 10 top-10 finishes on the Mississippi in FLW competition, now’s the time to sling around some weedless topwater on this stretch of the big river.

“Normally, the third to fourth week of June is when the frog bite starts to come into its prime,” he says. “Typically, the beginning of June is kind of a transitional period where the water might still be high and coming down from spring floods. Fish are still in a stage of postspawn and fry guarding, and there’s even some fringe spawning still happening [in early June]. As you start to push into that third or fourth week of June, it starts to become true summer. That’s what I’m starting to see here.” 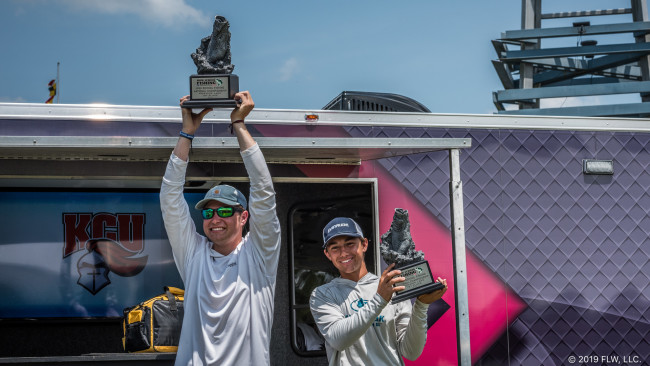 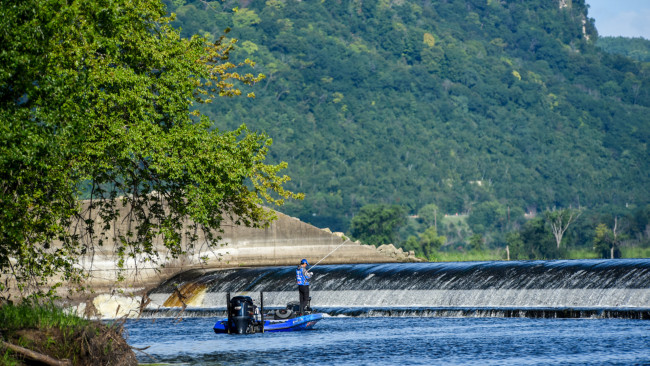 Breaking down the pools

The tournament will take off from Pool 8 near La Crosse on the border between Wisconsin and Minnesota. Laufenberg says the roughly 23-mile-long pool is one of the better sections for catching quality bass, but it’ll be crowded.

Upstream, Pool 7 is home to Lake Onalaska, a popular tournament area with flats covered in “fishy” grass beds. It’s about a three-minute run from takeoff to the lock and another 15 minutes to get through if all goes well. Though Laufenberg admits to struggling on Pool 7 at times, he says Onalaska produces many local tournament wins, especially when the frog bite is happening. Anglers need to be able locate fish spread throughout vast areas and stay on their trail each day, which can be a challenge.

The lock to access Pool 9 is a 20-minute run from takeoff. Pool 9 is a great numbers lake, where 2- to 3-pounders should be schooling up. 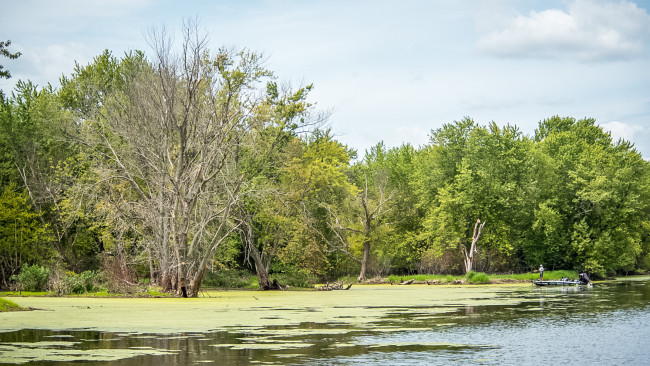 Setting up the frog bite

Right now, the fishery is in pretty normal condition for this time of year, despite a recent influx of runoff.

“We had some remnants of that tropical storm last week, and we got 6 inches of rain,” Laufenberg says. “The water got really muddy, and it jumped up again to like 8 1 /2 foot [5 1/2 to 6 feet is normal]. It’s probably going to be in that 6 1/2- to 7-foot range when those guys get here, depending on if we get any more rain.

“It’s forecast to drop back pretty steadily, and it’s going to get hot. That’s going to pull a lot of that vegetation to the surface, and we should start to have mats. The duckweed should really explode because we’re going to have hot weather. So the frog fishing is going to explode.”

Duckweed is a key component of the frog bite, especially where it sets up around and against lily pads and emergent vegetation such as arrowheads and cattails. Bass will position beneath caverns formed by the overhead cover. They could be in backwaters, in side channels or even near the main river channel, as long as there’s a current break where the duckweed can get established and provide a place for bass to ambush crayfish and bluegills.

“Another good pattern to focus on is overhanging grass banks; cut banks where the current sweeps under the bank,” Laufenberg adds.

Two aspects of the frog pattern to dial in will be 1) figuring out how far along bass are in their transition from postspawn areas near the backwaters to the main river, which dictates where a team should focus its efforts, and 2) how to get bites around other boats in what will be a crowded playing field.

“There are a number of key backwaters, especially on the lower end of Pool 8, where you’ll see a lot of pressure,” Laufenberg says. “It’s going to come down to a team figuring out not only a specific color and type of frog, but getting down to the nitty gritty of the cadence. I see a lot of people working their frog too fast. Sometimes you have to work pauses in with the bait. Slow it down and twitch it. You have to really be aware of where the fish are in the grass because sometimes you see just the subtlest movement of a bass under the mat, and that’s where you need to target. You have to figure out how to get bit in community areas.” 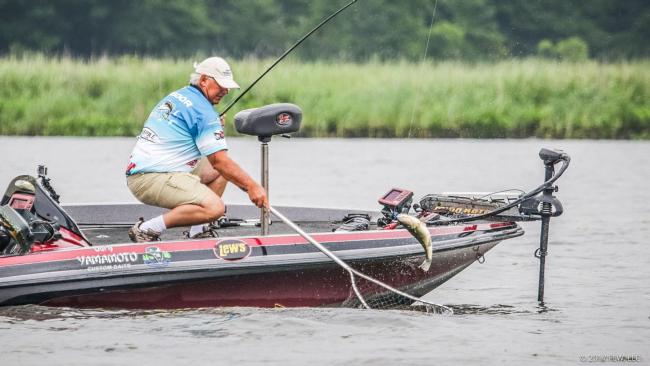 Three days of sunshine would surely make this a frog-fishing showdown. But even if it’s cloudy, topwater will still be in play.

“If it’s hot and sunny you need to be fishing shade,” Laufenberg says, “either fishing a mat, duckweed, lily pads, slop, or overhanging grass banks with a shade line or willow trees. You can fish that kind of stuff with a frog. If it’s cloudy – one of those warm, cloudy, muggy mornings, with maybe just a slight breeze – that’s when you’re going to pick up a buzzbait in those same areas, but maybe on the outer edge or where there might be some eelgrass. The buzzbait is maybe the best bait ever made to go and catch a lot of fish covering water when it’s cloudy on this river. Certainly, a swim jig is, too. The swim jig was kind of perfected here, but to me, a buzzbait and a frog at the end of June are just two things you should never be without.” 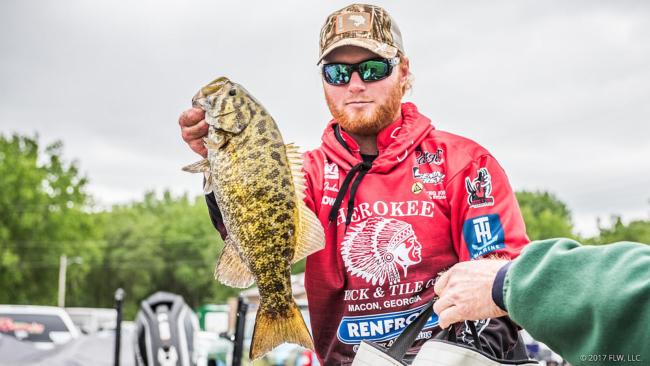 Are smallmouths a factor?

Laufenberg classifies smallmouths as “ghosts” this time of year. Fishing for them is hit-or-miss. Still, the river has some quality smallies. Most will be caught on sand drops, wing dams and riprap near the main river channel. Crankbaits, jigs and topwater baits will work on smallies, but the key might be committing to it all day to try and get three decent bites.

“Fishing riprap is always a productive way to put keepers in the boat,” says Laufenberg. “You will occasionally catch a large fish. That would be one way to get on a lot of smallmouth. The average quality of smallmouth will be a lot less though. There are lots of 12- to 15-inch fish. But you can stick with it and luck into a couple good bites.” 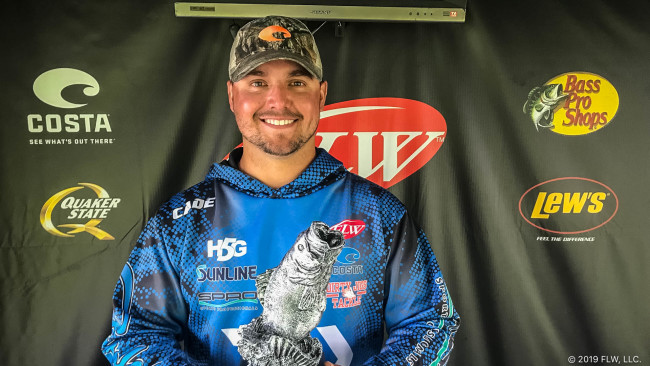 Based on past BFL weights and local tournament results in events conducted with three-bass limits, Laufenberg predicts a real traffic jam of teams in the 8-pound-limit range each day. Catching 9 pounds would be a big day, and 10 or 11 pounds would have a team on its way to the finals.

Catching that kind of weight will likely require getting away from the crowds.

“Being that there’s 300 and some boats, and it’s a multi-day tournament, I think locking is a terrific idea,” says Laufenberg. “Somebody could get on a winning school of fish down on Pool 9. It’s a great pool for numbers of quality fish in the 2 1/2- to 3-pound range. I like Pool 8 better for really big fish, like 4- to 5-pound fish, but Pool 9 is great for a lot of fish. In three days of competition, if a team can put up a consistent 8 1/2 to 9 pounds per day, they’re going to have a good chance to win or be right there, and I think you can do that by locking to Pool 9 and getting away from people and getting on those big schools of fish.” 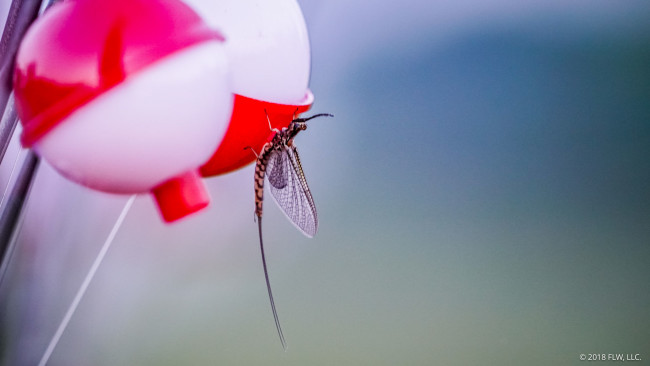 The Upper Midwest is known for impressive mayfly hatches in the summer. La Crosse hasn’t seen the annual “big one” yet, and Laufenberg thinks it’s coming any day now.

“We might be lining up absolutely perfect for the big mayfly hatch of the season,” he says. “There’s always one massive mayfly hatch. There are many little waves of smaller ones. If the timing is right with that event, that could be a huge player because that just creates a chain reaction of things going on. A guy could pull up on a tree that’s full of mayflies, throw the frog up there, shake a bunch of mayflies up, get the bluegills popping and all of a sudden catch 18 pounds on a tree. That could happen.”

Whether or not the mayflies hatch, the nation’s top high school anglers shouldn’t have much trouble catching bass with power-fishing tactics that jive with patterns from whatever corner of the country they’re used to fishing. The Mississippi near La Crosse is a hotbed for shallow largemouths, with enough smallies and other tactics to really make it interesting.

Which is why it’s a perfect location to contest High School Fishing’s biggest title.