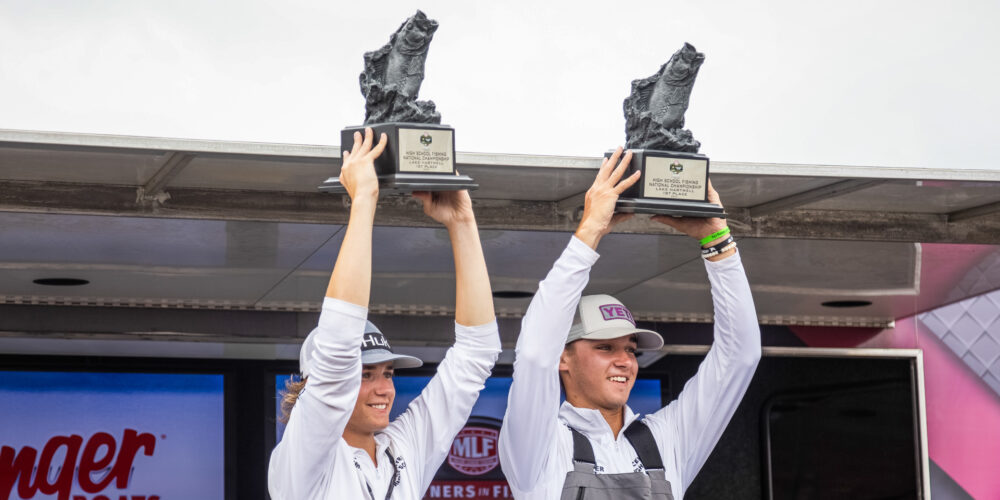 The watch party in Martinsburg, Pennsylvania must have been ecstatic. Putting their third three-bass limit over 9 pounds on the scale, the Central High School Dragons team of Jerry Brumbaugh and Hunter Klotz totaled 28-13 to win the High School Fishing National Championship on Lake Hartwell. Tallying 9-9 on the final day, Brumbaugh and Klotz edged out Will Hart and Logan Fisher of the Madison County Red Raiders, who weighed 26-15 for second place. For the win, Brumbaugh and Klotz take home $10,000, berths as Strike King co-anglers in the lucrative Toyota Series Championship and several scholarships offers from colleges with fishing teams.

Brumbaugh and Klotz are childhood friends, having fished and played backyard basketball together for as long as they can remember. Now, they are National Champions together.

The duo overcame a host of talented anglers in a tournament field with nearly 400 boats to claim high school fishing’s top crown. To do so, they leaned on consistency and the teachings of their captain, Brumbaugh’s father Gerald.

“I think a lot of people went in and beat the bank today,” added Brumbaugh. “But we learned to keep with it.”

“I told the camera boat today that we would need a kicker fish to win,” said Klotz.

That kicker never came, but but the grind paid off an hour before weigh-in, when the duo boated a solid, 2-pound keeper that enabled them to cull a 1-pounder. Though it wasn’t the lunker bucketmouth they were hoping for, the bass propelled them to a finish just over a pound above Hart and Fisher, who they knocked off the hot seat before claiming their victory.

“We were running cane piles all week,” explained Brumbaugh. “It’s no secret. But without Garmin LiveScope, we aren’t winning this week. We aren’t sponsored by them or anything, that’s just how it is.”

“I had to do a double-take at first,” added Klotz. “You would throw the bait out there and the fish would all fly up to it. You could see them. It looked like a volcano rising up, but they would all sit there and they wouldn’t bite. Sometimes, you just watch them on the graph, they swim right under your boat and you have to go somewhere else.”

The teammates say they used a bait they’d never thrown before this week to take home the title, a jointed swimbait called the Sebile Magic Swimmer. By burning the unusual herring-imitating swimbait just under the surface, they were able to coax bass out of cover and towards the surface for a bite.

“Sometimes,” Klotz said, “They would smack it and you would miss them. Other times, they would suck it down.”

The Dragons found the bait by chance at a local tackle store. After reading about recent tournaments online, they coerced a store owner into selling them some of a precious stash that was kept behind the counter in unmarked boxes. And though they say that every fish they weighed came from a Magic Swimmer, their pattern did vary slightly throughout the week.

Early on, bream-colored baits and a medium-speed retrieve prevailed. As weather moved in, they switched to shad-colored baits and began reeling as fast as their 7:1:1 reels would allow – all in an attempt to trigger the reaction bite. At each cane pile, they would watch fish on LiveScope, make several casts and run on to the next waypoint.

The team estimated that they covered more than 50 spots each day.

Today’s win marks the end of Klotz’s high school fishing career. The incoming college freshman will go on to play baseball at Kent State University. Brumbaugh plans to keep fishing the high school trail next season when he will be a senior. Then, he’s planning on taking his fishing talents to the college stage.

National Championship results can be found here. Tomorrow, the competition continues on Hartwell with the final day of the High School Fishing World Finals.