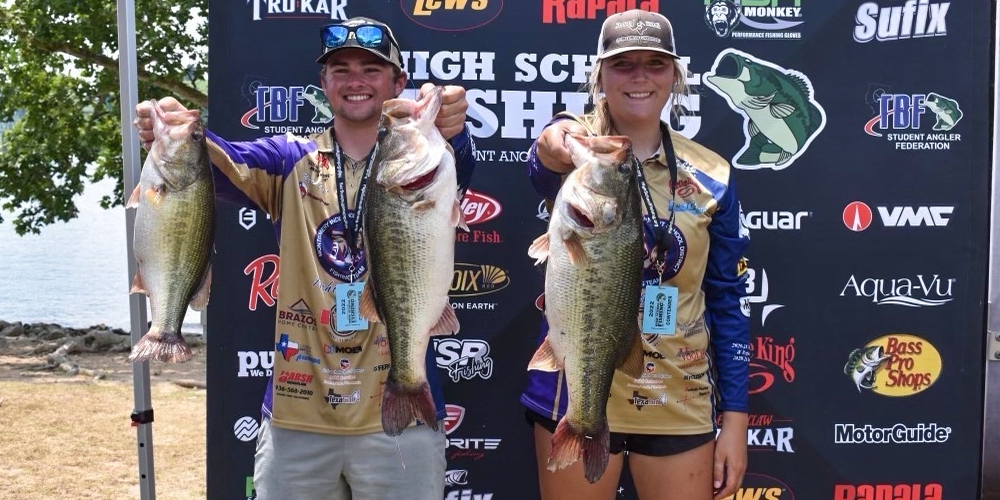 FLORENCE, Ala. – On the first day of their first tournament with a proper blast off, the Texas-based team of Fallon Clepper and Wyatt Ford sat and waited below the towering, metal superstructure of a hulking bridge over the Tennessee River. As they watched bass boat after bass boat rocket away, the scope of the stage began to sink in.

On Pickwick, a large southern reservoir that fishes smaller than its stature suggests, waypoints are a precious commodity, and each wake ahead of them meant one more competitor that could possibly beat them to a game-changing ledge. The two high school bass anglers and their captain watched 308 boats spirit down the lake before their turn was called.

By mid-morning, they had a pretty good hunch that their number would be the first one on top of the leaderboard when they returned.

By the time the early summer heat prompted TBF officials to open weigh-in early at the 2022 High School National Championship and World Finals, Clepper and Ford were already waiting to walk across the stage. As the scales balanced just before noon, the strength of their Day 1 performance became clear: A three-fish bag of 18 pounds, 8 ounces put them squarely atop the leaderboard before most of the competition had a chance to return to the ramp.

“We didn’t know what we were going to get today,” said Julian Clepper, the team’s coach and Fallon’s father. “We had a list of our top five waypoints and set out to start running down the lake. As we passed each one, we saw other people on them and went onto the next one. By the fourth one, we found room to move in and leave 100 yards between us and the other anglers.”

Clepper said his team asked permission from the other competitors to fish in an area of slack water that ultimately netted a jaw-dropping bag before mid-morning. The team fishing for Lake Creek High School in Montgomery, Texas, immediately struck pay dirt when Ford’s first cast refused to budge.

“I set the hook and my drag slipped a little bit,” Ford said. “I knew I either hooked a fish or a log, but it was pretty stressful because I had set the drag way too tight, and when it started running I had to start thumbing the spool. I was thinking ‘man don’t let this fish get off.’”

Fifteen minutes later, Clepper and Ford double-hooked another 6-pounder and a 4-pounder.

“It was crazy,” Fallon Clepper said. “We never get to experience a double hookup like that, especially with two big fish. So, it was pretty awesome to get that experience, especially when we’re not from here and have only been on this lake for three days.”

“Chaotic,” described Ford. “Our captain was running around trying to figure out which fish to net first.”

The simultaneous strikes that sent the elder Clepper scrambling to the gunnels with the net had the entire team looking at each other with wide-eyed stares.

“They looked at me. I looked at them, and they said ‘We are done,’” said Julian Clepper.

The team said they had already received word that weigh-in at this 416-boat super tournament would be opening more than two hours early. With that knowledge in hand, they decided to play the long game, back off the fish and head in.

Looking Ahead to Day 2

The miraculous 15 minutes of fishing that propelled Clepper and Ford to the Day 1 lead is the kind of event that builds stories of a lifetime. It’s also the kind of event that can win a tournament. On the line this week are $500,000 in scholarships and prizes from the High School Bass Fishing National Championship along with another $3 million in incentives from the World Finals, which Clepper and Ford also lead. With a 4-pound lead going into Day 2, the team says their goal is to boat a limit and stay in contention for the final showdown on Friday.

Still, changing conditions could alter the team’s game plan. Cloud cover is moving into the area, replacing bluebird skies from Day 1. Current, too, should play a factor as TVA cranks up the flow from Pickwick and Wilson dams, both of which were nearly stagnant on the first day of competition. Additionally, the massive field will once again be a significant factor in boating a limit of quality fish.

“To be honest, it’s like fishing in a bathtub out there,” Ford said. “There are so many other boats, but the fishing hasn’t been bad to me.”

“My 11-year-old self that started fishing competitively with my dad would have never thought I could be in this situation,” Fallon Clepper said. “I am so glad to have this experience and to do what I love everyday.”

The High School Bass Fishing National Championship and World Finals continues on Thursday, when the full field will blast off again from McFarland Park in downtown Florence, Alabama. This time, Clepper and Ford will be near the front of the pack — with a long way to go.