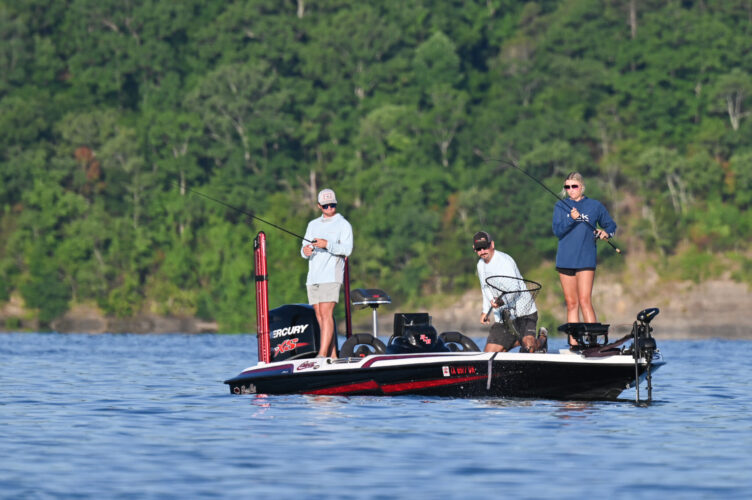 The day after America celebrated 50 years of Title IX being signed into law, Fallon Clepper broke a new barrier for women in the sport of bass fishing.

The 17-year-old Texas native, along with her teammate of three years, Wyatt Ford, won the 2022 High School Fishing National Championship on Pickwick Lake in Florence, Alabama, on June 24. The duo’s final weight of 39 pounds, 9 ounces stamped Clepper’s name in the history books as the first female angler to ever win the High School Fishing National Championship.

The road to that history-making moment began in Magnolia, Texas, where Clepper’s dad, Julian, bought her a pink Barbie rod as soon as she could walk.

“I kept bugging him to take me fishing on the pond we had out back and the first fish I ever caught was a bluegill on that pink Barbie rod,” Clepper said.

A few years down the line – and perhaps a rod upgrade or two later – Clepper was tired of just watching her dad’s weigh-ins: she wanted to join him on the boat and on the stage. At only 11 years old, she found herself fishing alongside Julian, and winning a Sunday morning tournament with him. While some kids might stress out about catching enough fish to win or to impress their parents or teammates, Clepper said for that for her, fishing gave her first taste of Zen.

“For me, it wasn’t even about winning,” Clepper said. “We were having some (family concerns) at the time and being on the water is my ultimate stress-reliever. Whether you win or not, it’s always just nice to be on the water, away from your stress.”

When Clepper started at Lake Creek High School in Montgomery, Texas, she needed a teammate so she could continue to fish tournaments. She found one in Wyatt Ford, whose parents had grown up with hers, and they’ve been teammates ever since. Unfortunately, being the only female angler at her school didn’t come without some conflict.

“My freshman year, when Wyatt and I became teammates, he got a lot of hate for it,” Clepper said. “People would say, ‘Oh, he’s partnered with a girl, they aren’t going to win anything.'”

Clepper and Ford finished 20th in the standings that year; the following year they won the Angler of the Year race.

“People kind of stopped talking about me (being a girl) after that,” she said.

Fallon didn’t have any female anglers that she could look up to growing up, so she admired anglers like Jacob Wheeler and Stetson Blaylock. However, nobody came close to how she looked up to her dad, and it’s no secret how close Fallon and Julian are. Being the only child, she was the “son he always wanted,” Fallon jokes.

Julian served as Fallon and Ford’s boat captain at the High School National Championship, a role that Fallon wasn’t sure that Julian could fulfill due to medical reasons. Julian, on the other hand, wasn’t going to miss it for the world. After filling the roles of dad, teammate, boat captain, mentor and biggest cheerleader for 17 years, Julian was going to make it to Alabama no matter what it took.

On the second day of the Championship, a tournament director approached the Cleppers and Ford, informing them that if they won, Fallon would become the first female angler to have ever received that title.

“There’s no doubt that hearing that lit more of a fire under her,” Julian said. “She’s always been very competitive; if she’s going to do it, she’s going for the top.”

There are two distinct moments that happened for both Fallon and Julian on that June afternoon.

“Thirty-nine pounds, 9 ounces … meet your champions!” the emcee belted out.

Julian was in the crowd when Fallon was handed the microphone, and didn’t expect what happened next.

“I’d like to thank my dad because without him none of this would even be possible,” Fallon said through tears. “He always told me to never give up, keep my head down, and keep fishing, and that’s exactly what we did.”

Julian saw Fallon’s eyes tear up, and his did too. Through the breakdowns, the obstacles, the negative words said about a female angler, the fishing in cold, nasty weather, his daughter thanked him for pushing her and making her do the hard work.

The next memorable moment – and the greatest for Fallon – came after the trophy ceremony as she was walking down a path with Julian; a little girl approached them, asking if she could have a photo with Fallon.

“I’ve never seen my daughter’s face light up like that,” Julian said, choking up. “The look on her face just to know that someone is looking up to her, there are no words that can describe that.”

The little girl lit up when Fallon let her hold her trophy for the photo.

“For me, it’s not all about winning,” she said. “It’s all about getting people to look up to you and inspiring a new generation of female anglers. It’s about the experience and the fans and not being cocky.”

As Fallon starts her senior year at Montgomery High this fall, she has plenty of scholarship options from a variety of schools but says that she wants to stay close to home and study animal science. Like most high school seniors, she isn’t sure exactly which way to go but has the following advice from her dad to lean on: “At the end of the day, you make your own decisions. Nobody can ever take away from you that you were the first woman to win and the fact that you won in general.”

It’s pretty easy for women to get intimidated in an industry where they’re not well-represented. That’s Fallon’s driving force. When asked for one piece of advice she would give female anglers who want to break into the bass fishing industry, Fallon doesn’t skip a beat.

“If you’re scared, don’t be,” she said. “Once you get into it and become part of a team, that team becomes your family. Don’t ever believe that they’re thinking negatively about you.”