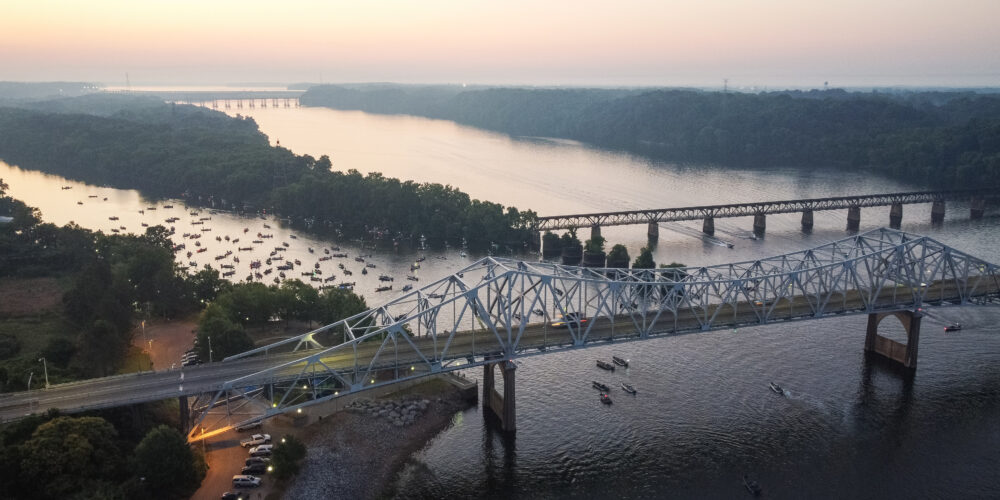 FLORENCE, Ala. — A national championship title, two Strike King co-angler spots in the 2022 Toyota Series Championship and more than $3 million in prizes are on the line this week at the High School Fishing National Championship and World Finals on the Tennessee River.

In both contests, the rewards for up-and-coming bass anglers are bountiful. The World Finals boasts more than $3 million in prizes, namely scholarship money from colleges from around the United States. Meanwhile, the National Championship has its own $500,000 worth of prizes—including the opportunity to compete in the Toyota Series and win a fully-rigged Phoenix bass boat.

All told, 3,000 people are expected to be on-site in Florence this week, as representatives from the U.S. are joined by anglers from as far away as Canada, Zimbabwe and South Africa.

The Lakes in Play

The Tennessee River is one of the most well-known fisheries in the sport and both Pickwick and Wilson Lakes are capable of producing strong bags. A left or right out of launch in downtown Florence will place anglers in either lake’s waters, amidst a playground of ledge fishing opportunities, grass flats and even potentially productive shallow areas. And with more than 400 boats in the field, it’s likely that anglers will need to maximize their presentations to boat bass capable of keeping them in the hunt until Championship Friday.

Washam’s Take on the Lake

Tackle Warehouse Pro Circuit pro Jimmy Washam guides on Pickwick and expects good fishing for the event, though he figures the crowding will be pretty intense with 400 boats on the water.

“The fishing is good, the lake is healthy, there’s a great population of fish, but we’re getting into the time period of the offshore season where the fish are getting pressured and feeling the heat from being out there for a month,” said Washam. “There are so many people with good electronics, and those fish really can’t hide. So, we’re in the time of year where you really need to be dead on with your timing or get pretty tricky with how you get them to bite.”

One noteworthy aspect of Pickwick is the available shallow grass, which is especially prominent in the upper end of the lake, above the Natchez Trace. According to Washam, there’s potential for a big-fish pattern to play, considering the high school teams are only fishing for three-bass limits.

“Especially with a two-man team and a three-fish limit, there will be some impressive three-fish bags that come out of the grass,” said Washam. “The grass is doing a lot more than I expected it to do after the winter we had with high muddy water. There’s some healthy grass, and there’s always a population of fish, and big fish, around gizzard shad in the grass in the summer. They often get overlooked, with a two-man team, a team could really commit to getting three bites and likely put their bait in front of three kicker fish a day. If they execute, that’s likely the highest percentage way to get a really big bag in this event.”

Grass, offshore or elsewhere, Washam is high on the potential of Pickwick. Despite low current flows, he thinks it will take a lot of weight to win.

He’s also appreciative of the opportunity that high school and college fishing provides. Growing up, he forged his own way in fishing, and never really had the chance to be on a team with a bunch of aspiring anglers his age.

“It wasn’t a thing in high school, and in college, it was just starting to take off, and I was a baseball player,” recalled Washam. “I would have been much farther along in my fishing career than being a 35-year-old rookie. This would have given me a better avenue, when I was a college kid I didn’t know all the techniques, but if you gave me a spinnerbait and some mono I would catch fish wherever. Something like this would really have given me a kickstart to my career.”